The Affordable Care Act was designed to fulfill two simultaneous goals: provide health insurance to people too sick or poor to afford it on their own, and slow down medical inflation. So far it has made progress on both goals: The uninsured rate is falling, and medical inflation is running at historic lows.

Obamacare was pitched as a plan to reduce health care spending, and formally titled the “Patient Protection and Affordable Care Act.” …

For several years, Obama and his allies had been crediting a slowdown in the rate of growth for health care to payment reforms imposed by the law.

Sorry, but this is just confused. There was always going to be a spike in aggregate health-care spending in 2014, as millions of previously uninsured people suddenly gained access to medical care for the first time. (People like the Fox News–watching Philadelphia man who hated Obamacare but finally relented, signed up for insurance, and got a life-saving operation this month.)

If you think I’m simply making up some after-the-fact excuse, advocates of health-care reform were pointing this out at the time the bill was being debated. Here’s Jonathan Cohn explaining in 2009 how the new health-care law was projected by Medicare actuaries to bend the long-term curve of health spending downward while still allowing for a big spike when new customers came online in 2014:

The cost-cutting measures start right away; the expansion/strengthening of insurance starts in 2014 …

He even had a chart! 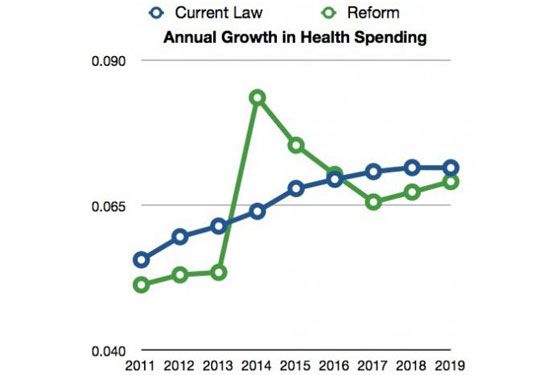 Ezra Klein, analyzing a different cost projection, made the same point in 2010:

What you’re seeing here isn’t the cost curve bending up. It’s a one-time increase in the level of spending. That’s the big jump in 2014, the year the exchanges and subsidies come online. So when you compare 2014 to 2013, spending growth seems like it’s gone up a bunch. But by 2016, we’re back to normal. In fact, we’re better than normal: “For 2015-19, national health spending is now projected to increase 6.7 percent per year, on average – slightly less than the 6.8 percent average annual growth rate projected in February 2010.”

In other words, 2014 is a one-time increase in spending level as we get 30 million new people covered. After 2014, costs grow more slowly than they would without the health-care reform bill

He had a chart, too: 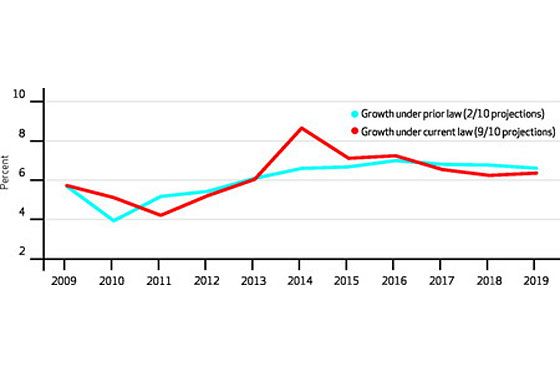 Those were mere forecasts, of course. What has happened since 2010 is that health-care costs have come in far lower than projected. The cost curve has bent downward, so far, much more rapidly than even the most optimistic advocates have hoped. But there has to be a temporary increase in the total amount of spending when you’re adding millions of new people who were previously unable to see a doctor.

The unbelievably low rate of medical inflation since 2010 is likely to bounce back up as the economy recovers. The question is whether it recovers fully to its historic rate, or whether the reforms in the Affordable Care Act help squeeze waste out of the system. We don’t know the future; what we do know is that the evidence so far, including the spike in 2014 spending, is consistent with the hypothesis of success.

Update: Klein replies that I haven’t debunked anything:

at no point did I write that the BEA report was definitive proof that costs would explode for as far as the eye could see. In fact, I even noted that the estimate for health care spending was, “preliminary and subject to revision in the coming months.” So I’m not sure what he thinks he has “debunked.”

It’s true: he didn’t say the spike in health care spending last quarter was “proof” of anything. Instead, he implied that it was evidence that Obamacare is failed to work as promised. (Klein: “Obamacare was pitched as a plan to reduce health care spending, and formally titled the “Patient Protection and Affordable Care Act.”) In fact, as noted above, Obamacare was pitched as a plan to slowly hold down medical inflation over a long period of time in order to clear room for a spike of higher usage when previously uninsured customers entered the system. The spike is not evidence Obamacare is failing to perform as pitched. It is evidence it is performing exactly as pitched.