This week’s New York cover story, by Lisa Miller, is a detailed look at the life of the city’s new first lady, Chirlane McCray, touching on the personal, the political, and the intersection of the two. But the New York Post summed it up, as the Post does, on its cover today in five inflammatory words: “I WAS A BAD MOM!” That’s not quite what McCray said, and the mayor is not pleased with what he called the “caricature” of her comments.

“I was 40 years old; I had a life,” McCray told Miller of the adjustment period that comes with being a parent. “Especially with Chiara — will we feel guilt forever more? Of course, yes. But the truth is, I could not spend every day with her. I didn’t want to do that. I looked for all kinds of reason not to do it. I love her. I have thousands of photos of her — every 1-month birthday, 2-month birthday. But I’ve been working since I was 14, and that part of me is me. It took a long time for me to get into ‘I’m taking care of kids,’ and what that means.”

The quotes about motherhood made the corner of the Daily News cover, too, under the headline “Didn’t want to be a mom”: 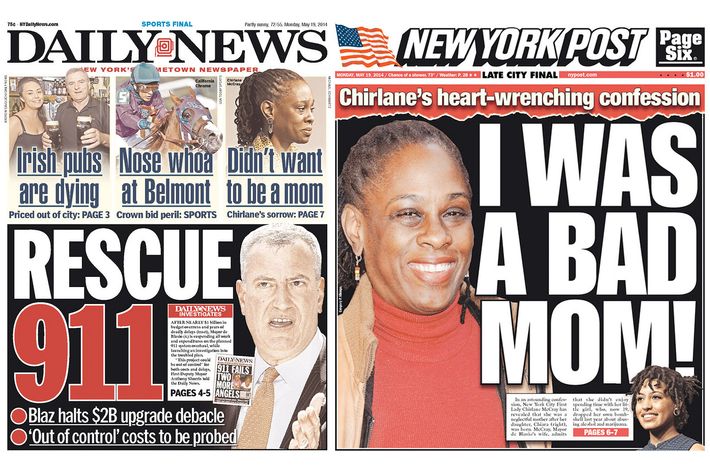 “I think both the Post and the Daily News owe Chirlane — I think they owe all of us — an apology for absolutely misrepresenting what she said and caricaturing a reality that I think so many women face,” said Mayor de Blasio today at an unrelated press conference. “It’s very troubling to me and I think a lot of people in this town today are troubled by it.” (The New York Times called his reaction an “unusual and stern rebuke.”)

The @nypost's repulsive distortion of @Chirlane's @nymag interview, shows that they do not even hold motherhood to be sacred

Largely free of context, the Post wrote that McCray “says she was unable to embrace motherhood and initially neglected Chiara, who last year dropped the bombshell that she was in treatment for abusing booze and pot.” The Daily News was gentler: “McCray admits she initially struggled adjusting to her role as mother — and still feels guilt about needing time apart from newborn Chiara.”

Read the two stories and judge for yourself. Not comparable in their treatment, IMO. http://t.co/t6L8e1nGMT, http://t.co/x32VOYVfNk

But the mayor was mad at both regardless, and not alone, he said: “I think a lot of women are offended. A lot of hard-working women in this city are offended.”

“I love my wife very deeply. She is an extraordinary mother. She always has been,” said de Blasio. “She very much wanted to have children, which is evident in the New York magazine article if anyone cares to read it and not caricature.” You can read the whole thing here.

THE FEED
10 mins ago
tremendous content
tremendous content
Bonkers Revelations From Maggie Haberman’s Trump Book, Ranked
By Margaret Hartmann
If you want more information on Trump being weird with toilets and belittling Jared Kushner, Confidence Man has you covered.
10:08 a.m.
just asking questions
just asking questions
How There Will Be Blood Explains the Crumbling Global Economy
By Kevin T. Dugan
Think inflation is bad here? Brent Johnson predicted the global financial crisis we’re in, and he thinks it’s going to get much worse.
9:00 a.m.
the city politic
the city politic
The Horror That Continues to Haunt Our City
By Errol Louis
Treating New Yorkers with serious mental illness is one of the only ways we can prevent tragedies like the murder of FDNY Lt. Alison Russo-Elling.