Like it or not, electronic cigarettes have managed to become a thing. In New York City, from St. Marks Place to Crown Heights, vape stores are the new head shops (sorry, Michael Bloomberg) and smoke breaks now often come without the lingering scent. But new regulations threaten to kill the momentum by taking away some of the convenience: Vaping is now prohibited everywhere smoking with fire is, including bars, your cubicle, and city parks. (The FDA is also cracking down amid research that says liquid nicotine at high temperatures is still carcinogenic.)

Does anyone care? Do people even know? Intelligencer dispatched our interns to Bryant Park, Union Square, Rockefeller Center, and Washington Square Park to survey 100 New Yorkers on their vape feelings. Based on our findings, nearly 40 percent of those asked have tried e-cigs, but a majority have no idea what the rules are. The e-cig industry’s big celeb push, meanwhile, is just not working. Here are the full results.

Although a sizable majority have thus far abstained from vaping, 37 people said they’ve taken a pull of the future, making it something more than just a niche fad, at least for the moment. 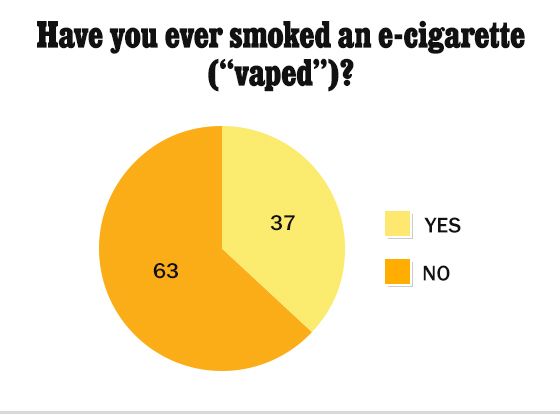 Those surveyed ranged in age from 16 and 72, and most were not ashamed to admit that they do not know the specifics of the law, which went into effect last week. 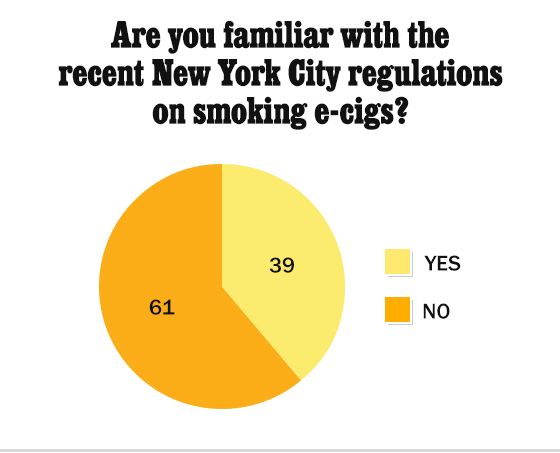 Sure enough, barely half of those surveyed were aware it’s not legal to puff in restaurants, bars, offices, clubs, or classrooms. 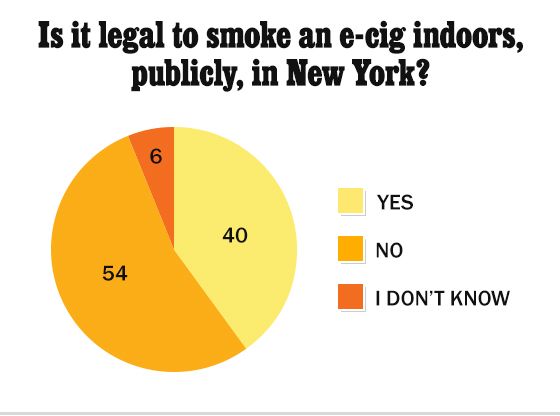 Even fewer knew that smoking on city land — even under the open sky — is punishable by a fine. Most people got it wrong. 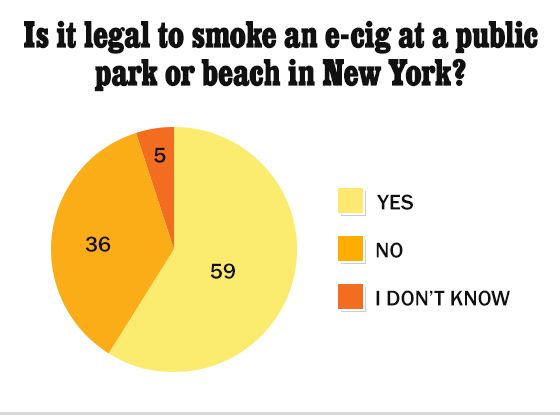 Vaping, most can agree, is not offensive — no one really cares. 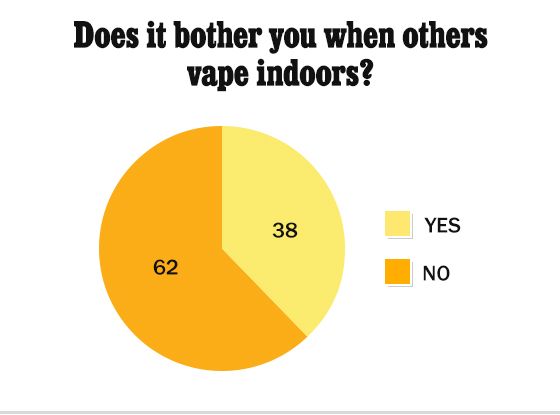 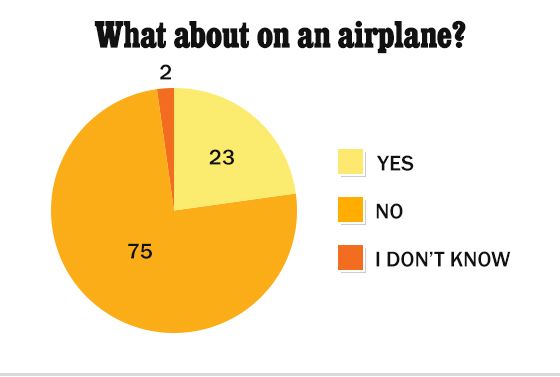 And yet most of the New Yorkers we asked still think it should be illegal, because … it just feels wrong? 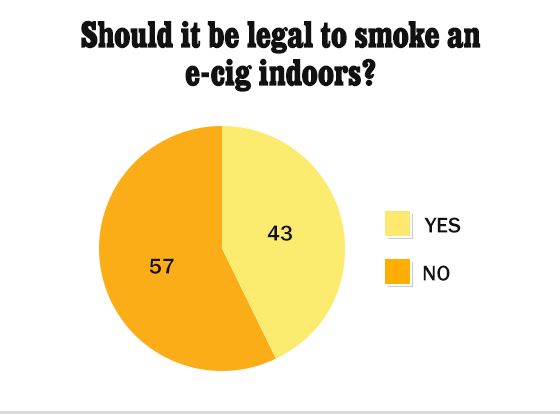 Now the most important stuff: Regular cigarettes, according to rock and roll and decades of American popular culture, look pretty rad. Their robot cousins? Even cooler, said 16 people, while 12 said they’re less cool. Bloomberg would be proud to know that a plurality ruled that both are horrible. 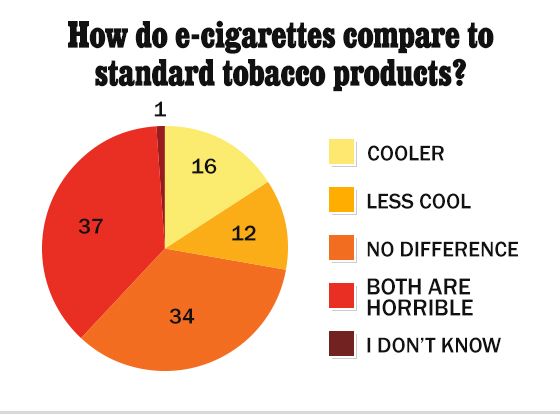 The vast array of flavors are not doing it for people either. (Yes, there is a Red Bull variety.) 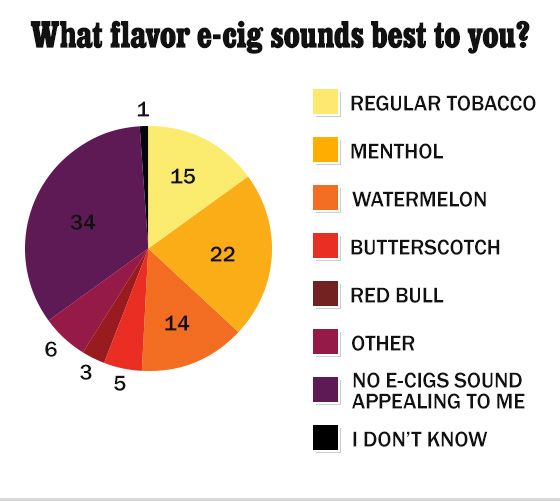 Attempts by e-cig brands to make their products trendy have relied almost entirely on starpower, from Courtney Love’s “Relax, it’s a fucking NJOY” video to Stephen Dorff’s resurgence as a Blu e-cigs pitchman. But according to our findings, they’re failing miserably. Only seven people even attempted to name a famous person who vapes, and as far as we can tell, James Franco and Jennifer Beals are wrong answers. (Emile Hirsch?! Sure, okay.)

Only two people could recall the majesty of Leo on a CitiBike, in a newsboy cap, with an e-cig. It’s not quite Paul Newman, but it’s the best we’ve got. 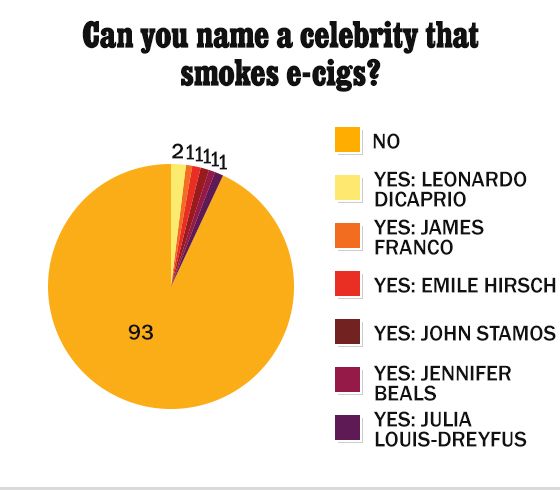 Special thanks to Jen Kirby, Jason Schwartzman, Noah Hurowitz, Claire McCartney, and Allegra Hobbs, who did most of the hard work.