Will President Obama’s plan to regulate power plants, due to come out Monday, hurt him and his party? Not long ago I wrote a column arguing that they would. Yesterday the U.S. Chamber of Commerce released a new study claiming that the regulations “will generate substantial adverse economic impacts in the United States.” Now I’m revising my belief. The Chamber has generated the scariest-sounding estimate it could come up with, and it still isn’t very scary at all.

Naturally, in keeping with the energy industry’s cherished tradition of predicting far higher costs of new regulations than the actual result, the Chamber’s study makes deeply pessimistic assumptions about the cost of regulating carbon emissions from power plants. For reference, a study by Resources for the Future, a respected environmental think-tank, found negligible costs. The Chamber study represents the alarmist pole of the debate, generated as attack-ad fodder.

The Chamber study employs a couple easily spotted gimmicks. It assumes demand for electricity, which has grown 0.7 percent a year since 2000, and which the U.S. Energy Information Administration projects to grow at 0.9 percent a year through 2040, will grow at a 1.4 percent annual rate. That assumption would make any reduction all the more expensive to achieve.

It is true that the administration has endorsed this other long-term goal as well. But the plan due to come out Monday is almost certainly not going to attempt to achieve it. The focus is on 2020 levels, which are the basis for the next round of international climate negotiations. The Chamber explains this decision with mock judiciousness: “The 42% emissions reduction figure was chosen because, to date, it remains the only publicly announced Administration GHG reduction goal for 2030.” That’s true! But to measure a plan that’s designed to meet 2020 targets, you don’t need to look at 2030 targets at all.

The reason the study uses this trick becomes clear when you look at how its projected costs break down. The costs through 2020, represented by the bar on the left, are really low. It’s only in the years after 2020 — when the study starts adding up costs for much stricter limits than Obama is actually going to propose — that the numbers start to pile up: 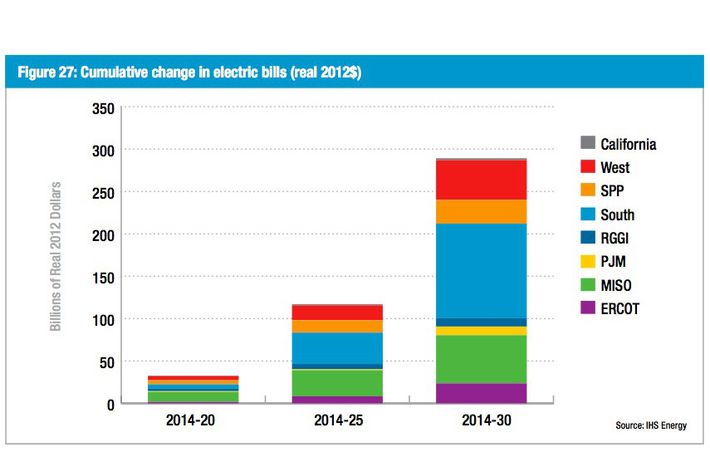 The longer-term measure is not just harder to achieve, it’s harder to measure. Higher standards drive better technological changes from the private sector. Attempting to measure the cost of meeting higher standards two decades down the road with only currently available technology is guesswork. “A model today can only accommodate technology available today, not technology that is just around the corner,” says Dallas Burtraw, an economist at RFF, “Hence I feel forecasts that run a decade out are useful, but decreasingly so beyond that point.”

Even so, while the study uses lots of impressive adjectives to describe the size of the cost it predicts, the numbers are pretty meager. It predicts the regulations will increase electricity costs by $17 billion a year. Scared? Keep in mind electricity costs about $350 billion a year, which would mean the Chamber is predicting a one-time hike in electricity bills on the order of 5 percent a year. For the average American, that’s about $100 a year in his electric bill.

Even the Chamber’s unrealistically dire number is still low enough that most people would barely notice it. (For perspective, a poll found that the average American would spend $162 a year for cleaner energy.) Adele Morris, a Brookings Institute climate economist, told me, “If they were going to make up numbers, I’d assume they’d have made up bigger ones.”

The study’s bad faith is made abundantly clear in its conclusion, which announces that regulating power plants will still eliminate “a mere 1.8% of global CO2 emissions.” The assumption, in other words, is that nothing the United States does to limit its carbon emissions will impact the amount that other countries emit: “Regardless of the national emissions reduction policies modeled in the [proposed regulations], and the adverse economic impacts resulting therefrom, global CO2 emissions – both in the power sector and overall – will continue to grow rapidly.”

But that is not an inflated assumption, it’s a completely absurd one. The Chamber is assuming Obama’s plan is to impose costly energy restrictions on itself, and continue to tighten those restrictions year after year, while every other country in the world does nothing at all to limit greenhouse gases. That would be an incredibly stupid plan. Nobody is willing to do that. The whole point of reducing U.S. emissions is to meet targets needed to forge an international agreement.

The premise of the Chamber’s study is that global emissions lie completely outside of American influence, so we might as well use all the dirty energy we can and let future generations deal with it. Against that backdrop, any program to reduce carbon pollution, however efficiently designed, is a pointless waste. But what the Chamber is actually demonstrating, in its attempts to frighten us, is that we hardly have anything to fear.