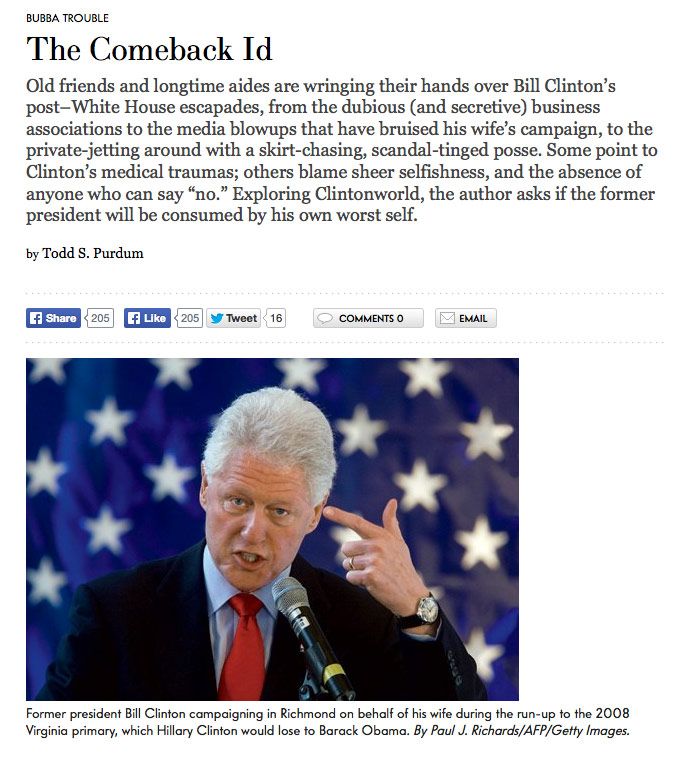 THE FEED
3:58 p.m.
politics
politics
Congress Takes On the Week From Hell: Updates
By Ben Jacobs
Everything from Biden’s presidency to the creditworthiness of the U.S. government is on the line.
3:25 p.m.
rikers island
rikers island
‘It’s Hard to Find the Words to Describe How Bad It Is Right Now on Rikers’
By Nia Prater
Legal Aid Society attorney Corey Stoughton shares her thoughts on the current crisis at Rikers Island.
2:31 p.m.
politics
politics
Why Dentists Oppose Democrats’ Plan to Add Dental Coverage to Medicare
By Ed Kilgore
Like physicians before them, dentists are against so-called “socialized medicine” — even though it will help fill their own pockets.

12:42 p.m.
tomorrow
tomorrow
The Public Continues to Underestimate COVID’s Age Discrimination
By David Wallace-Wells
In the breakthrough era, age matters as much as vaccination status.
11:14 a.m.
arizona audit
arizona audit
Arizona Audit Aftermath Shows Trump Conspiracy Theories Will Go On Forever
By Ed Kilgore
Yes, the recount in Arizona showed Biden’s lead actually increasing, but there’s always another rabbit hole for MAGA folks to explore.
11:03 a.m.
the national interest
the national interest
Tim Scott Turns Against His Own Police-Reform Plan
By Jonathan Chait
Republican senator once supported tying grants to reform; now he calls it “defunding the police.”
10:37 a.m.
unreal
unreal
The View’s COVID Chaos Continues
By Mia Mercado
Last week, two hosts tested positive for COVID mid-show — but it turns out their tests were inaccurate.
9:32 a.m.
germany
germany
Social Democrats Claim Mandate After Close German Election
By Matt Stieb and Benjamin Hart
If results hold, Angela Merkel’s Christian Democratic Union could lose its place at the head of the federal government it’s led since 2005.
9:30 a.m.
the money game
the money game
What Can the U.S. Learn from China’s Crackdown on Crypto?
By Scott Galloway and James D. Walsh
“It’s telling that the world’s most robust economy says, ‘Big tech is a danger and we need prevent what has happened in America from happening here.’”
8:00 a.m.
encounter
encounter
Streaming With Hasan Piker, the AOC of Twitch
By Luke Winkle
“I’m a political commentator with, like, stans.”
6:00 a.m.
metoo
metoo
Anita Hill Wants More Than an Apology
By Rebecca Traister
Thirty years after her groundbreaking testimony to Congress, Hill says gender violence is a public crisis.
9/26/2021

Hundreds of soldiers could be scrambled to deliver fuel to petrol stations running dry across the country due to panic buying and a shortage of drivers under an emergency plan expected to be considered by Boris Johnson on Monday.

The prime minister will gather senior members of the cabinet to scrutinise “Operation Escalin” after BP admitted that a third of its petrol stations had run out of the main two grades of fuel, while the Petrol Retailers Association (PRA), which represents almost 5,500 independent outlets, said 50% to 90% of its members had reported running out. It predicted that the rest would soon follow. …

The British Retail Consortium also said moves to relax immigration rules to fix supply chain issues was “too little, too late” for Christmas.

Boris Johnson to consider using army to supply petrol stations
—The Guardian
9/26/2021
transportation
transportation
Amtrak Train Derails in Montana, Killing 3 People
By Chas Danner
As many as 50 people were injured. The cause of the derailment, which sent eight cars off the tracks, is not yet clear.
9/26/2021
explainer
explainer
What to Know About Booster Shots, Now
By Paola Rosa-Aquino and Chas Danner
Tens of millions more Americans are now eligible for a third dose of Pfizer’s COVID vaccine, and states have already begun rolling out the shots.
9/26/2021
vaccine mandates
vaccine mandates
Vaccine Mandate for New York City Teachers Delayed by Federal Appeals Court
By Chas Danner
The temporary injunction blocks enforcement of mandate until it can be reviewed by a panel of judges on Wednesday.
9/26/2021
politics
politics
Will Progressives Really Sink Joe Biden’s Agenda?
By Ben Jacobs
Congressional Democrats’ high-stakes internal standoff is about to come to a head.
9/25/2021
de mayor
de mayor
Bill de Blasio’s Most Severe Senioritis Symptoms
By Matt Stieb
The mayor has been dressing down, riding roller coasters, demolishing dirt bikes, and generally enjoying his final months in office — maybe too much.
9/24/2021
election 2021
election 2021
The Preelection Honeymoon of Eric Adams
By Choire Sicha
From Met Gala after-parties to Monaco.
9/24/2021
sports
sports
Yankees Fans Were Worried About the Wrong Things
By Joe DeLessio
The team is fighting for its playoff life. How did we get here?
9/24/2021
the national interest
the national interest
Conservatives Are Having Another Nervous Breakdown Over ‘Socialism’
By Jonathan Chait
Joe Biden is still a capitalist.
9/24/2021
booster shots
booster shots
CDC Director Overrules Advisory Panel on COVID Boosters for High-Risk Workers
By Paola Rosa-Aquino
The agency’s director backed another shot for older and vulnerable Americans and for people whose jobs put them at higher risk of exposure.
9/24/2021
just checking in
just checking in
So, What Is Rudy Giuliani Up to These Days?
By Margaret Hartmann
Now that he’s not busy representing Trump, he’s been dealing with personal legal woes, getting banned from Fox, and shaving in an airport restaurant.
9/24/2021
politics
politics
Eric Adams Spent His Summer Vacation in Monaco, Like James Bond
By Nia Prater
Politico cracks the case of the missing mayoral hopeful.
9/24/2021
2020 election
2020 election
Trump-Backed Arizona Audit Confirms His 2020 Loss
By Benjamin Hart
Sometimes the Cyber Ninjas surprise you.
9/24/2021
the inside game
the inside game
This Trump-Backing Congressman Has a History With the Bidens
By Gabriel Debenedetti
Jill Biden brought future GOP congressman Brian Mast to the State of the Union in 2011. Things are less friendly now.
9/24/2021