Look, I can make my hair look like that Einstein dude’s.

Two years ago, Michael Hainey asked Marco Rubio how old the Earth was. “I’m not a scientist, man …” Rubio demurred, “I don’t think I’m qualified to answer a question like that.” Yesterday, when Jonathan Karl asked Rubio about anthropogenic climate change, the prospective Republican presidential candidate was fully qualified to hold forth on scientific matters:

I don’t agree with the notion that some are putting out there, including scientists, that somehow there are actions we can take today that would actually have an impact on what’s happening in our climate.

Our climate is always changing. And what they have chosen to do is take a handful of decades of research and say that this is now evidence of a longer-term trend that’s directly and almost solely attributable to manmade activity, I do not agree with that.

It’s not clear what scientific training Rubio has acquired since 2012 that would allow him to confidently wave away a wide expert consensus, but his synopsis does not inspire confidence. Begin with the “somehow” — “somehow there are actions we can take today that would actually have an impact on what’s happening in our climate” — as if the connection between human activity and rising temperature is fuzzy or hard to discern. The mechanism by which carbon dioxide helps to trap heat is very easy to observe in a laboratory, and the higher concentration of carbon dioxide in the atmosphere can likewise be measured straightforwardly.

More redolent still is Rubio’s dismissal of “a handful of decades.” You mean like all the decades since humans began emitting massive amounts of carbon dioxide into the atmosphere? 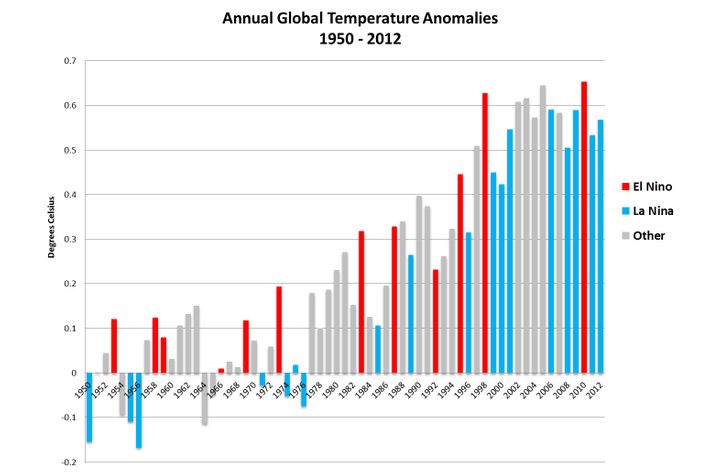 It is possible that Rubio is referring to a notion, popular among climate-science skeptics, that global temperatures have risen and fallen over hundreds of thousands of years. But that can’t be the basis for his confident dismissal of climate science, since, as noted before, Rubio thinks it’s entirely possible the Earth is only six thousand years old.

+Comments Leave a Comment
Marco Rubio: I Am Now a Scientist, Man