Bobby Jindal, the prospective Republican presidential candidate, warns that unnamed fellow conservatives are secretly contemplating surrender in the crusade against Obamacare. “[E]ven many conservative ‘thinkers’ in Washington have given in to ObamaCare fatalism,” he writes, using scare quotes to indicate his skepticism that these traitors think at all. “They may not say so in public, but they fully believe that talk of the law’s repeal exists only in the land of unsophisticated rubes.” Meanwhile, conservative health-care writer/activist Jeffrey Anderson has heard the same secret concerns. “It’s a question often asked these days in conservative circles: Do you really think Obamacare can be repealed?,” he reveals in the Weekly Standard, “Usually uttered behind closed doors, the question reveals both an un-Reagan-like pessimism and something of a disconnect from political reality.” Amusingly, both Jindal and Anderson casually breeze past the fact that fellow Republicans are too frightened to openly admit their beliefs about health-care policy as though it were a banal fact, and move directly to the urgent need to suppress such heresies. Anderson even wields the starkest term of excommunication — “un-Reagan-like” — against his cowardly foes.

On the surface, Republican thinking about Obamacare remains almost unchanged. The essential precepts of party thought have undergone no fundamental revision: The law is a monstrosity, an unqualified political liability for Democrats, and its destruction remains the essential goal of the next Republican presidency. Yet, much in the way that a close reading of Pravda might reveal subtle hints of furious discord within the party leadership, signs abound of secret schisms and concealed doubts.

The Affordable Care Act was designed to make health insurance available to Americans too poor or sick to afford it on their own, while over the long run clearing budgeting headroom by cutting unnecessary cost growth. The coverage goal is near, or perhaps slightly behind, its targets. The cost goal is well ahead. Here, from left to right, are the Congressional Budget Office’s projections for the federal health-care budget in 2020 before the passage of Obamacare, after, and in its most recent update: 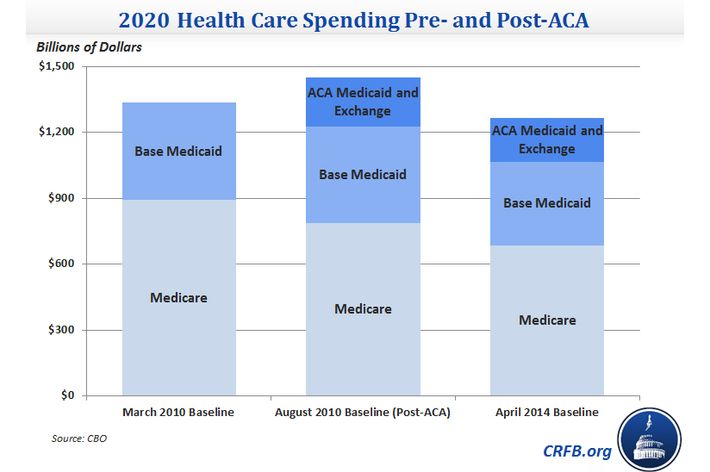 One might argue that the law has benefited from an unforeseen trend toward lower health-care costs, but even so, it has resulted in a dramatic improvement. Millions of Americans who previously could not access medical care they wanted and needed can now get it, while the government is projected to spend considerably less on health care than before.

Conservatives can’t acknowledge anything like this. Yet policy must be formulated in the face of this stark reality, even while denying its existence. All members of the conservative movement agree that Obamacare must be repealed and replaced with a “free market” alternative. All likewise agree that such an alternative will be more cost-effective and more politically popular. (They have no explanation as to why, five years after the start of the health-care-reform debate, the party has failed to coalesce around such an obviously superior alternative.)

In the absence of meaningful programmatic disagreement, the intra-conservative debate instead revolves around subtle cues of ideological commitment, like party cadres vying not to be the first to stop applauding for Stalin. The Wall Street Journal editorial page was forced to defend its anti-Obamacare bona fides merely because it supported transitional reforms to the law until it could be fully destroyed. (“We support repealing ObamaCare as much as anyone, but that shouldn’t mean refusing to make the law less destructive to the businesses that create the most jobs.”) Republican leader Cathy McMorris Rodgers told her local newspaper, “We need to look at reforming the exchanges,” which is perfectly compatible with replacing Obamacare, but which she was nonetheless forced to recant (“She will continue fighting to repeal Obamacare at every opportunity moving forward,” assured her spokesperson, “and replace it with patient-centered reforms.”)

Conceptually, there is no difference between “repealing” and “reforming” Obamacare. Both involve altering the status quo, which entails the existence of President Obama’s health-care law. One could, in theory, “repeal” Obamacare and replace it with a new law that differed only slightly. Alternatively, one could keep the law in place while “reforming” it into something unrecognizable. The rhetorical emphasis on repeal is a way of signaling the absence of secret pragmatic impulses or, worse still, glimmers of regret at the prospect of throwing millions of Americans off their insurance.

Jindal’s column consists mainly of what he probably takes to be Reaganesque exhortations of optimism and unwavering fervor, i.e.: “The country that won two world wars and put a man on the moon cannot, it is believed, repeal a disastrous public policy. Says who?”

Says who? The cowardly heretics lurking behind closed doors, that’s who.

THE FEED
22 mins ago
what we know
what we know
Hurricane Ian Nears Another Landfall in South Carolina
By Intelligencer Staff
Georgia and the Carolinas are under states of emergency in preparation, while Florida struggles to recover.
26 mins ago
politics
politics
New Yorkers Could Get Paid to Report Illegal Parking
By Nia Prater
A proposed bill in City Council would allow people to report instances of illegal parking and receive a cut of the fine.
12:46 p.m.
tremendous content
tremendous content
Bonkers Revelations From Maggie Haberman’s Trump Book, Ranked
By Margaret Hartmann
If you want more information on Trump being weird with toilets and belittling Jared Kushner, Confidence Man has you covered.