“We would love to have you over to experience that Cowboy Life,” Lyon Porter, the owner of a Williamsburg townhouse he calls the Urban Cowboy, wrote to me earlier this month after I inquired about the space. Although his corporate day job is as a director of sales and leasing at Town Residential and he lives mostly in Manhattan, his entrepreneurial side project is all Brooklyn™. Lyon’s email signature just said “Cowboy.”

There may be a slight smile and a wink there, but the 33-year-old is mostly earnest. “The Cowboy is the definition of a passion project,” declares the website for the bed and breakfast, which opened last month. “In an area starved for authentic short term housing options, we provide an opportunity to experience Living in a Modern Luxury Brooklyn Townhouse, with an Industrial Williamsburg/Adirondack/Cowboy Sensibility.”

Lyon (pronounced lion) bought the place late last year for just over a million dollars with plans to renovate before renting it out as apartments, but a trip to the Nicaraguan surf camp/artists’ colony Maderas Village, which has an “Ambassador of Vibe,” helped inspire him to go the communal route.

“The energy at Maderas pushed me over the edge to say we’re going to have a shared living room, an experience that’s lacking in hospitality right now,” Lyon told me. “It’s like staying at someone’s house.” Someone’s really nice, really Brooklyn house.

“While I do believe we’re extremely hip, I’ll respectfully leave out the -ster,” he said, engaging gamely on the unavoidable H-word. “People are looking for an authentic Brooklyn aesthetic and vibe. If this encapsulates what a traveler from Sweden who wants to feel like a hipster for a moment likes, then I’m happy to be a hipster. If I’m the hipster cowboy, then so be it.” To be fair, I was the only person there with a beard. 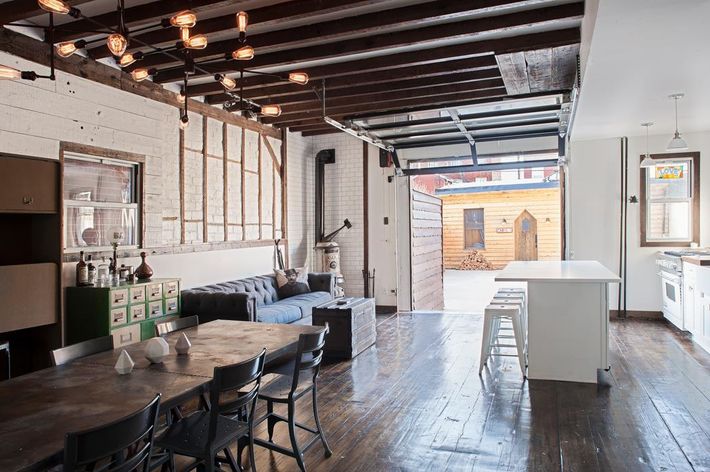 When I arrived at 111 Powers Street, in a still-Italian section of Williamsburg, on a humid spring Saturday, a young woman from Milan (by way of Brazil) was smoking in front of what was obviously the Urban Cowboy, its stained pine facade sticking out in a neighborhood of clapboard and aluminum siding. She may as well have been a plant, raving in broken English right away about how she’d spent the last week at the Cowboy, but extended her trip to stay another week in the master suite (dubbed “the Lion Den,” $300 per night). “Ees amazing,” said Luciana. “I feel so com-for-table.”

Through the raised garage door was an open parlor of exposed brick and beams, where I was greeted by Jersey Banks, a dancer/model turned one-woman innkeeper and concierge service (or in Urban Cowboy lingo, “Director of Cultural Curation, Park Ranger, Ranch Hand”), and Lyon, looking like a Disney prince who played professional hockey, which he did, his strong butt-chin marked with a scar that somehow seemed stylish.

He gave me a tour of the rooms upstairs, including the hostel-like Dream Catcher ($100 per night, “For the Lone Ranger all about that Urban Cowboy Life!”) and the Peace Pipe ($200), pointing out the gramophone chandelier between them.

But his real pride was reserved for the free-standing Kanoono Cabin in the backyard ($400 per night), complete with plank wood floors and claw foot bathtub. “I sourced that door underneath the BQE in Gowanus for $200,” he beamed. “I bartered with someone in the middle of nowhere Ohio for that,” he rattled off, pointing to the functional pot belly stove. (Lyon collaborated with designer Renee Mee on the scavenging and the overall aesthetic.)

“I’ve been carrying around that Jon Bon Jovi thing for like 15 years,” he said of the kitschy plaque above the mini-fridge. “It doesn’t work in a normal apartment. I just knew someday … ” he said. “It matches the walls perfectly.” Later, there was talk of building a “teepee” between the house and the cabin, next to the hot tub. 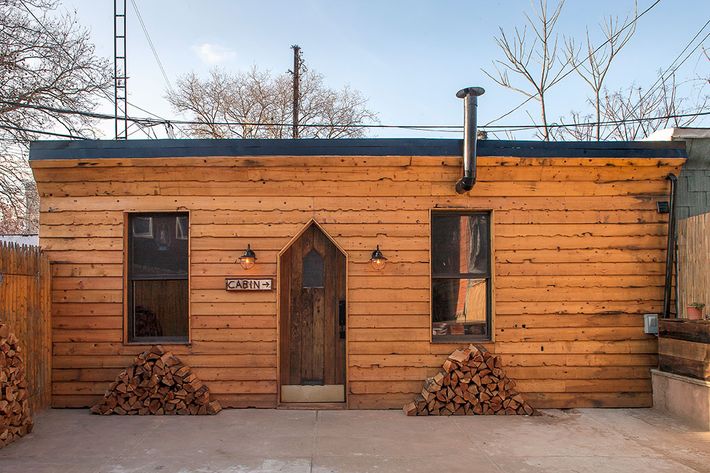 Kanoono, Lyon explained, “is what the Native Americans called the harbor of New York before the arrival of the white man.” But he doesn’t see that as a potential metaphor for how he’s helping to accelerate change in the still-developing area. “The gentrification of this neighborhood is inevitable,” he said. “As someone who’s sold condos in this neighborhood and helped develop it, for better or worse, I know I’m doing something good.” The neighbors have embraced him, he said, and even had him over for Sunday dinner. “There’s been no pushback.”

“The Wythe Hotel is Vegas. It’s an amusement park,” said Lyon of the trendy spot a 15-minute walk toward the Williamsburg waterfront. “I’m not a hater — I love that place — but this is a neighborhood.” Originally from Shaker Heights, near Cleveland, he first moved to Brooklyn around 2001. “The L train didn’t work on the weekends, there were no condos, there were prostitutes and heroin on Kent Avenue,” Lyon recalled. “It was the Wild West out here — pun intended.”

Now people want a different kind of “authentic” experience. “Williamsburg is the coolest place in the western hemisphere,” he said. “You’re choosing to stay in Williamsburg, you’re kind of an interesting person.”

And with the popularity of Airbnb among people hoping to experience a piece of that — and the potential illegality of room-renting services under New York law — Lyon saw an opportunity to capitalize by building the real thing, while also making himself a clubhouse. The Cowboy Life “is following your own truth and your own rules,” he explained. It also came with rosé and delivery tacos on the house. 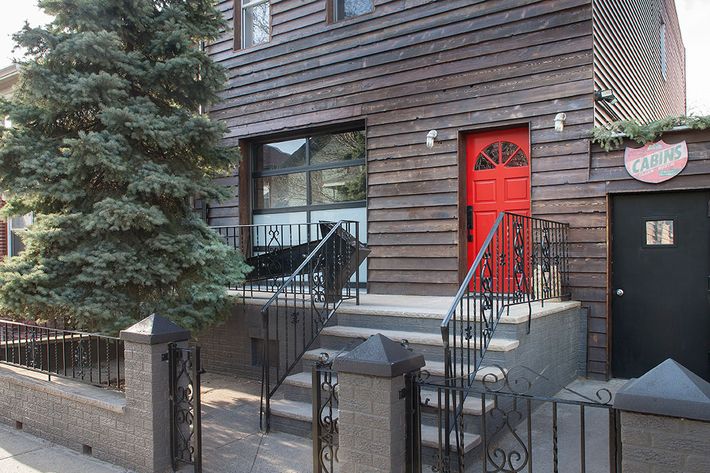 During my visit, a warm welcome parade of neighbors and acquaintances passed through the communal space for drinks and tours, including a friend of a friend using the Cowboy as a sanctuary amid a breakup; a Jamaican woman with a longboarding sponsorship, who sat around vaping; and the “house mascot,” Mike B., a self-described “wild Canadian” with spiked hair and a recommendation for where to order authentic Mexican food.

“I think we made it in America,” said the girl with the vaporizer, which was filled with island coconut flavoring. “This is not Brooklyn.” Conversations about kombucha, pickling, and the pillow on the couch with a map of the borough said otherwise.

As we waited for the Seamless order, Lyon did don a cowboy hat and matching shirt before chopping some wood in the backyard, while remixes streamed from the Hype Machine app on an iPad to the house Jambox via Bluetooth. “This 25 by 100 lot is my little ranch in Brooklyn. This is mom and pop,” he said. “I’m not the Man — I’m just a man. I’m just a cowboy. I’m just one dude that’s doing something special.”

+Comments Leave a Comment
A Night at the Urban Cowboy: Williamsburg’s B&B

4/16/2021
georgia election law
georgia election law
Can Suppressing Votes Save Brian Kemp?
By Ed Kilgore
Kemp is using Georgia’s new election law to heal a breach with Trump-loving conservatives but so far has drawn only a gadfly primary opponent.
4/16/2021
housing
housing
To ‘Build Back Better,’ America Must Build More Housing
By Eric Levitz
A historic housing shortage threatens to hamper the post-COVID recovery.
4/16/2021
side effects
side effects
Why the Second COVID Shot Makes You Miserable
By Jeff Wise
Unpleasant side effects are in part a consequence of lightning-quick vaccine development.
4/16/2021
foreign interests
foreign interests
Withdrawing From Afghanistan Is Biden’s Least Bad Option
By Jonah Shepp
The pullout of U.S. troops will likely have tragic consequences for Afghans, but remaining indefinitely offers no clear path to victory.
4/16/2021
politics
politics
5 Revelations From John Boehner’s New Memoir
By Jonann Brady
In On the House, the former Speaker praises Nancy Pelosi’s “killer instinct,” unloads on Ted Cruz, and claims Mark Meadows once begged on his knees.
4/16/2021
intelligencer chats
intelligencer chats
What the Mainstreaming of Crypto Means for Normies
By Benjamin Hart and Jen Wieczner
Digital currencies are likely to become more intertwined with everyday life.
4/16/2021
politics
politics
The GOP’s Barebones America
By Sarah Jones
Behind a narrow definition of infrastructure lies a narrow vision for the country.
4/16/2021
mass shootings
mass shootings
8 Killed in Shooting at FedEx Warehouse in Indianapolis
By Margaret Hartmann
At least five other people had been hospitalized with injuries, including one in critical condition. Police said the gunman killed himself.
4/16/2021
capitol hill
capitol hill
Chuck Schumer Has Changed
By Gabriel Debenedetti
Why is the former “angry centrist” pushing his party to go bigger, bolder, and more progressive?
4/15/2021
nyc mayoral race
nyc mayoral race
The New York City Mayoral Race Is Starting to Get Petty
By Matt Stieb
In the nation’s largest city, leading mayoral candidates Andrew Yang and Eric Adams squabbled on Thursday over New York officials’ parking habits.
4/15/2021
vision 2020
vision 2020
Yes, Geographical Polarization Was a Big Deal in 2016 and 2020
By Ed Kilgore
New data shows that the suburban swings to the left and rural swings to the right are consistent with the intuitive trends in the last two elections.
4/15/2021
crime
crime
Why Do Tasers Look Like Guns Anyway?
By James D. Walsh
Daunte Wright’s killer is not the first law-enforcement officer to confuse the two, often with deadly consequences.
4/15/2021
police shootings
police shootings
Video Shows Chicago Police Shooting and Killing 13-Year-Old With His Hands Up
By Intelligencer Staff
The Chicago agency investigating police shootings released the graphic footage of an officer shooting Adam Toledo, whose hands were raised.
4/15/2021
infrastructure
infrastructure
GOP to Biden: Raise Taxes on Our Rural Base, Not Coastal Elites
By Eric Levitz
Biden wants to fund infrastructure with taxes on the (largely coastal) corporate elite. Republicans insist on soaking their own base instead.
4/15/2021
coronavirus
coronavirus
Israel Drops COVID Rule Requiring Masks Outdoors
By Matt Stieb
It’s a milestone for one of the nations to roll out the vaccine the fastest, though vaccination rates in Palestine lag significantly.
4/15/2021
extremism
extremism
McConnell Howls About Court-packing Just As Pelosi Nixes It
By Ed Kilgore
It’s a good example of how smears of the opposing party can run abruptly into countervailing reality.
4/15/2021
minnesota
minnesota
Is This a Community?
By Zak Cheney-Rice
Despite their rhetoric, the Brooklyn Center police have an open disinterest in actual community with city residents.
4/15/2021
climate change
climate change
New York Magazine’s David Wallace-Wells Testifies Before the Senate on Climate
By Paola Rosa-Aquino
Author of The Uninhabitable Earth on the cost of inaction.
4/15/2021

“The routine surgery was successful, and he is expected to fully recover and return to normal activity in the coming days,” Pence’s office says.
—@NBCNews
4/15/2021
crime
crime
Derek Chauvin Invokes Fifth Amendment, Won’t Testify
By Nia Prater and Margaret Hartmann
The defense has rested and closing arguments are set for Monday.
4/15/2021
the economy
the economy
The Biden Boom Has Begun
By Eric Levitz
Jobless claims are falling, factory production is rising, and retail sales are skyrocketing as Biden’s stimulus kicks in.
4/15/2021
politics
politics
Independents Aren’t Nonpartisan, They’re Just Disengaged
By Ed Kilgore
The increasing number of self-identified independents feeds partisan polarization by turning the parties over to ideologues and “outsiders.”
4/15/2021
crime
crime
Ex-Officer Who Fatally Shot Daunte Wright Charged With Manslaughter
By Nia Prater
Kim Potter was arrested and charged with second-degree manslaughter on Wednesday. She has been released on a $100,000 bond.
4/15/2021
covid-19
covid-19
What We Know About the Johnson & Johnson Pause and Vaccine Hesitancy
By Paola Rosa-Aquino
Europe faced a similar problem over a shot and clots.