Hopefully this sketch of the Zodiac Killer looks nothing like your dad.

For months, dozens of HarperCollins staff — sales, marketing, publicity, and legal — have managed to keep a potentially explosive new book almost entirely quiet. The Most Dangerous Animal of All, by Gary L. Stewart, is being published Tuesday but still has no cover art on the publisher’s website. It hasn’t gotten any press. As of 1:30 p.m. Monday, its Amazon sales rank was #140,113.

The book’s official plot summary is intriguing, but lacks specifics:

An explosive and historic book of true crime and an emotionally powerful and revelatory memoir of a man whose ten-year search for his biological father leads to a chilling discovery: His father is one of the most notorious-and still at large-serial killers in America.

Not mentioned in the summary: Stewart, a vice-president at a cleaning company in Baton Rouge, alleges that his father was the Zodiac Killer, who is believed to have killed at least five people in Northern California, and famously sent letters and cryptograms to Bay Area newspapers. The murders were never solved.

Stewart reached the conclusion that his father was the serial killer after twelve years of research, Tina Andreadis, a publicist at HarperCollins, told me yesterday.

Approximately fifteen months ago, B.G. Dilworth Agency brought a proposal for the book to HarperCollins’s Michael Signorelli (an editor who has since left for Henry Holt). It was acquired within a week or two, for an amount HarperCollins declined to disclose. “It was a standard acquisition process,” another publicist told me, “except for the NDA.” Stewart was paired with writer Susan Mustafa, a veteran of the true crime genre.

The book — 367 pages, including the index — was vetted by HarperCollins lawyers, including Fabio Bertoni, who is now general counsel at The New Yorker. “Our lawyers felt it was legally sound,” said Andreadis.

I asked if HarperCollins had reached out to the San Francisco Police Department, which investigated the cases. Andreadis said they had not. According to the book, she said, the department “knew more than they’re willing to admit.”

Andreadis didn’t share many details of The Most Dangerous Animal of All, but did say that Stewart’s father had a criminal record in San Francisco (“forgeries, bad checks”), and there was a strong resemblance between his father’s mug shot and the police sketch. “If you look at Gary’s photo next to the sketch of the Zodiac next to his father’s mug shot, you can see that there is very clearly more than just a passing resemblance,” she said. “They look alike.”

“He didn’t want to believe,” she said. “I don’t think most people want to know that their father is a notorious serial killer.”

UPDATE: Here’s the cover of The Most Dangerous Animal Of All: 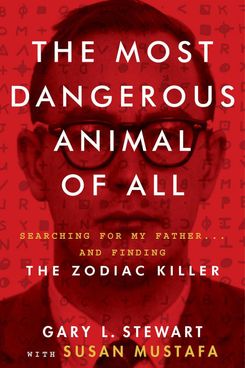