In the wake of Mitt Romney’s 2012 defeat, Republicans had at least one consolation: a deep bench of presidential contenders, including several governors with a proven ability to win majorities in blue states. Unfortunately, a large number of them appear to be criminals.

Former Virginia governor Bob McDonnell was handsome, popular, and widely touted as a top-tier contender. Now he is facing up to 30 years in prison for illegally accepting gifts and loans from a businessman. The next presumptive front-runner was New Jersey governor Chris Christie. Today Scott Raab and Lisa Brennan report that indictments are coming against four of Chris Christie’s subordinates, and that prosecutors believe they will ultimately indict Christie personally. Meanwhile, prosecutors today also alleged that Wisconsin governor Scott Walker — possibly the new front-runner in the wake of Christie’s demise — directed a “criminal scheme” to violate the state’s campaign finance laws.

The Walker allegations center around a widespread legal fiction governing independent expenditures. Donations to candidates can be regulated, but campaign finance laws have opened up a vast loophole for outside groups to spend money on elections, as long as they pretend they’re not actually part of the campaign. Walker apparently forgot to pretend. Prosecutors quote an email he sent to Karl Rove, who coordinates lots of Republican independent expenditures, explaining that his deputy, R.J. Johnson, would direct the independent expenditures:

Bottom-line: R.J. helps keep in place a team that is wildly successful in Wisconsin. We are running 9 recall elections and it will be like 9 congressional markets in every market in the state (and Twin Cities)

Violating the spirit of campaign finance laws is really easy, as long as you take a few basic precautions such as not sending an email describing your control of expenditures that are supposed to be outside your control. Walker may or may not ultimately be indicted, and if so, he may or may not ultimately be convicted. Republican-appointed judges have halted previous iterations of the investigation, arguing that any campaign spending amounts to free speech, and therefore any scheme to circumvent such laws is kosher. “The plaintiffs have found a way to circumvent campaign finance laws, and that circumvention should not and cannot be condemned or restricted,” wrote the Republican-appointed judge halting the last investigation, “Instead, it should be recognized as promoting political speech, an activity that is ingrained in our culture.”

The announcement by prosecutors in Wisconsin raises several disconcerting possibilities for a prospective Walker candidacy. The worst possibility is that he will be convicted of running a criminal scheme. A second, less-bad possibility is that he will avoid prosecution, perhaps by Republican judges who see the first Amendment as carte blanche to violate any and all campaign finance laws. This would still create an extended legal battle in which Walker’s name is associated with the “criminal scheme,” a phrase combining two terms which each have a highly negative connotation to most voters. This sort of coverage has caused Christie’s poll numbers to tank even without (yet) facing criminal charges. 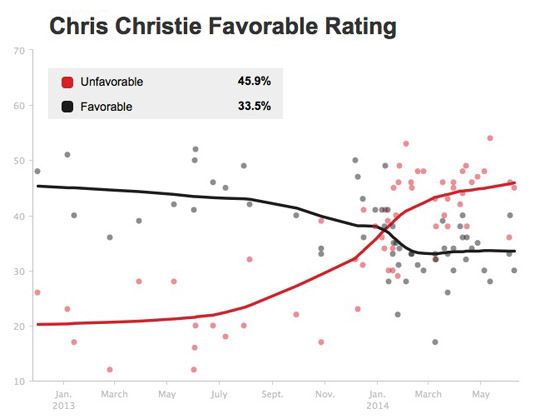 The most benign possibility is that Walker is quickly cleared, but the facts of the case would still raise serious questions about his intelligence. Sending an email explaining your plan to coordinate what’s supposed to be independent spending to the guy whose job it is to avoid campaign coordination is like if Walter White decided to cook meth in his high school chemistry classroom during school.

What's amazing about Scott Walker story is what Walker and others would write in an email.

The upside here is that Republicans still have plenty of potential candidates who are not facing criminal indictments. The legal decimation of the party’s mainstream wing could even, paradoxically, help the GOP nominate a non-extreme candidate, by making it easier for the Establishment to consolidate early around a single standard-bearer. If nothing else, all this might give another boost to Republicans’ growing interest in sentencing reform.

Update: Andrew Prokop has a good explainer on the state of play in the Walker case. What the prosecutors are doing here is “fighting for court permission to use the evidence they think they need to build a case.” Walker’s email to Rove is a damning and unbelievably stupid confession, but Rove – who is a major Republian independent expenditure coordinator – was not coordinating expenditures in Wisconsin.