At least six people were hurt at around 2 a.m. on Friday after a recycling truck took out the wall of a 24-hour Bed-Stuy deli. According to several reports, the accident happened after the truck’s driver swerved to avoid a car that had run a red light at Dekalb and Bedford Avenues. Though the truck missed the other vehicle, it ended up crashing into the corner store. “The front of the truck could be seen inside the deli, with shelves and appliances toppled over,” NBC New York noted.

Mohamad Ali, whose extended family has owned and lived about the Gourmet Deli for decades, told the New York Daily News that a couple of his cousins were doing the graveyard shift when the accident happened. “They were behind the cash register and the deli counter on the opposite side from where the truck hit — thank God,” said Ali, who had been asleep in the apartment upstairs. “The building shook for like five minutes … I feel like my brain is flying.” 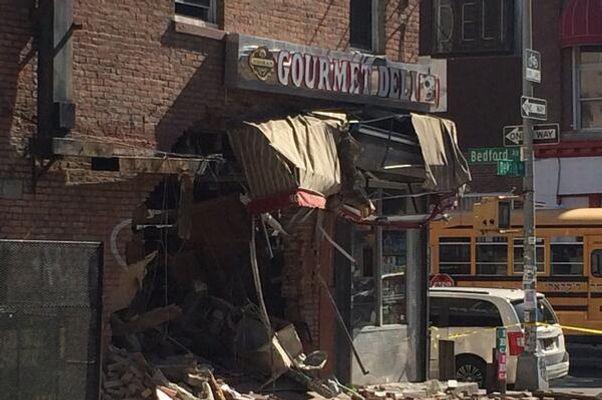 The victims, including the two drivers, were hospitalized with non-life-threatening injuries. As you can see, the building seems to have gotten the worst of it.