When Ken Hsu and Jimmy Pang were looking for a place to open an archery range, they settled on a beat-up industrial strip in Gowanus, Brooklyn. Until pretty recently, the area was a no-man’s land of warehouses and the sometimes-stinking canal. But Gotham Archery, their new 7,500-square-foot archery range that opens this week, is the latest addition to what is starting to look like the city’s offbeat sports destination. There’s rock climbing nearby, and a shuffleboard club popped up earlier this year. These ventures all fit well into the cavernous space of an old warehouse and fill a niche hobby void that the city might not have been sure it was missing out on. Hsu and Pang figure there’s no reason their Brooklyn neighbors can’t also learn to love an urban archery range, too.

Hsu tells me hesitantly before I come down that there aren’t many archers in Brooklyn. This is not surprising, but when I get to Gotham Archery, its metal gates are rolled up and a handful of dudes are fiddling with bows. The stadium lighting and white walls and bull’s-eyes strung up on black panels could almost trick you into thinking this is a pop-up art installation. But people are really shooting these Game of Thrones–esque weapons. The place smells like sawdust and the thwack of arrows punctures the air.

“The neighborhood is open-minded,” Hsu tells me. People who work and live nearby keep dropping in, and they were booked for their soft launch last weekend. A group lugging grocery bags walks by while I’m standing outside with Hsu. They do a double-take, stop, and back up to get a better look inside. I hear someone say “wow.” 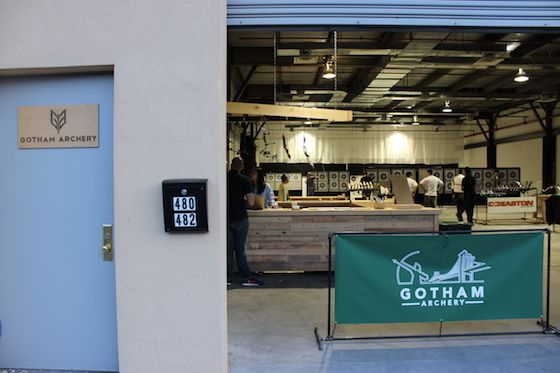 But a lot of people, including Hsu’s archery coach, were pretty skeptical of the venture, especially since both Hsu and Pang quit their finance jobs to focus on the range. “’Why Brooklyn? There are no archers in Brooklyn. Why open a range?’” Hsu says was the biggest criticism. “But then it’s a chicken and egg kind of thing. You’re not going to have archers unless you have an archery range.” 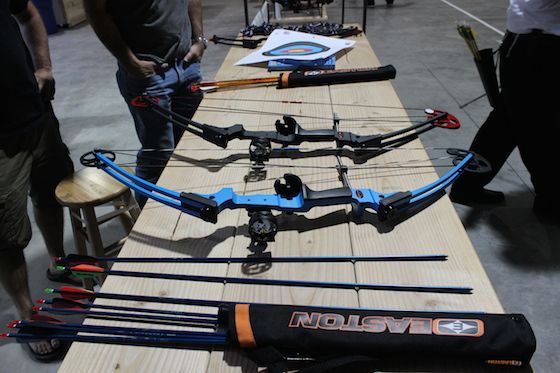 Hsu and Pang want to bring archery to the Everyman, or maybe just convert the Everyman into an extreme archery enthusiast. Hsu fell into archery a few years back and got hooked. He introduced Pang about a year and a half ago, and the they would drive out more than an hour to ranges on Long Island. But, Hsu said, he felt out of place among the advanced archers at the range, and, at first, had trouble finding someone to teach him how to shoot. “People were introduced to the sport, and it wasn’t usually a good introduction,” Hsu says. “Mine wasn’t great.” They want to remove the intimidation factor, and in their earnest passion for the sport, they’re sure people are bound to get hooked once they give it a try. Basically, if you build it, they will come. 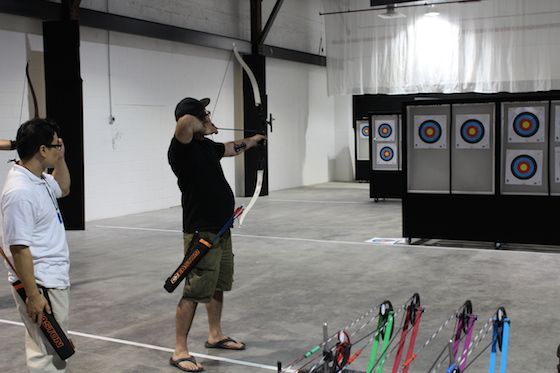 Plus, Katniss. The Hunger Games have given the sport a huge boost, says Hsu, especially among girls.

Despite that, when I visited earlier this week, only guys are shooting, no more than three or four at once. Archery attire is anything goes: gym clothes, flip-flops, jeans, baseball caps. 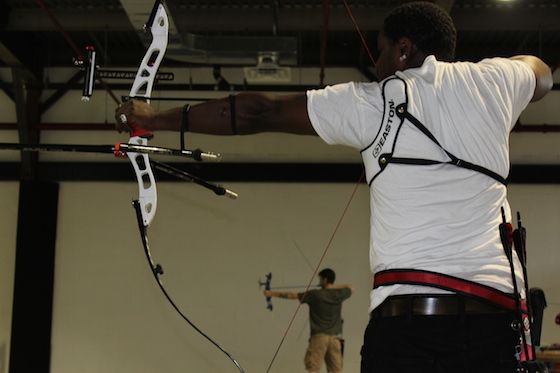 Gotham Archery requires an intro lesson, and they’ve brought others onboard to coach and serve as range safety officers. Derek Davis, 24, is on duty today. He grew up in East Rockaway, got his first bow at age 7 for Christmas, and became a New York state champ a year later. He’s joined at the line by Pang, who’s giving customers tips on grip and form and shouting “clear to shoot” and “clear to retrieve,” the all-important safety calls because, as Davis says, “nobody wants to be in front of that arrow.” 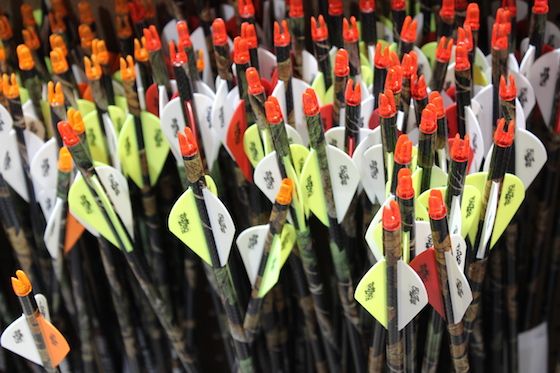 There are a few other experienced archers there. Charles Epps, a 39-year-old from Harlem, shoots on a 15-meter target with a concentration that is both brutal and unbroken, and there’s an accountant for the city who also coaches archery who is looking to go pro. But the rest are more or less beginners, though they seem to have caught on pretty fast (excluding myself, with a shot that was the archery equivalent of a 50 Cent baseball pitch). One guy takes a cell phone photo of his first hits, the arrows sticking out like toothpicks from the targets. 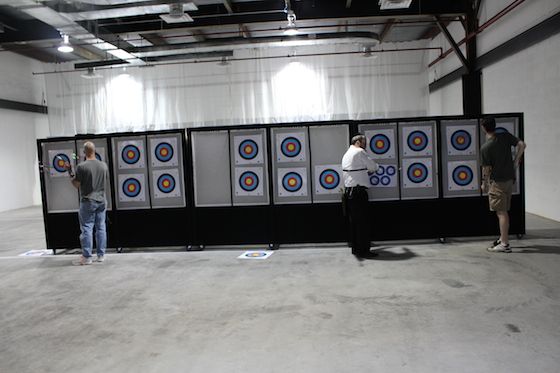 Myles Ehrlich, a 25-year-old beginner from Sheepshead Bay, came on the recommendation friend. He shoots until his aim starts skewing. He’d been at it for hours, and his form is slipping from fatigue. He probably wouldn’t have stopped otherwise. It’s cathartic,” he says. “You release your energy and focus exactly on what you’re doing.”

Cathartic seems an odd descriptor for a precision sport that demands you hit a circle within a circle a fifth of a football field away. But, Pang says, it’s very Zen. You clear your mind, it’s just you and the bull’s-eye. That intense focus hooks you in because it you miss it, you want to shoot immediately to get a hit. If you do hit the target, you want to feel that satisfaction again. “It’s addicting,” Pang says. Which is what he and Hsu are banking on. 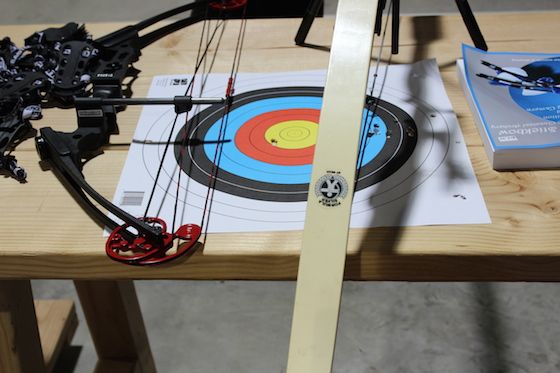 THE FEED
1 min ago
early and often
early and often
Letitia James’s Office Is Facing Its Own Sexual-Harassment Scandal
By Nia Prater
The New York attorney general has been accused of handling sexual-harassment claims against her chief of staff differently than those against Cuomo.
6 mins ago
tremendous content
tremendous content
Trump Is Paying His Diet Coke Valet’s Legal Fees
By Margaret Hartmann
The Feds see Walt Nauta as a key witness against Trump in the Mar-a-Lago classified-documents case. But it turns out their bond is the real thing.
3:12 p.m.
early and often
early and often
It Looks Like the Supreme Court Will Not Blow Up Our Democracy (for Now)
By Jay Michaelson
A theory that would make state legislatures the ultimate decider of elections and overturn the Constitution as we know it gets its day in court.