Did David Brat’s upset victory over Eric Cantor express a revolt over the prospect of immigration reform? The answer is yes, sort of. Clearly anti-immigration activists like Laura Ingraham and Mark Levin supplied much of the energy for Brat’s campaign. On the other hand, the Republican base doesn’t hate immigration reform that much. The new Pew survey shows that the idea of giving illegal immigrants a path to citizenship is highly popular in general: 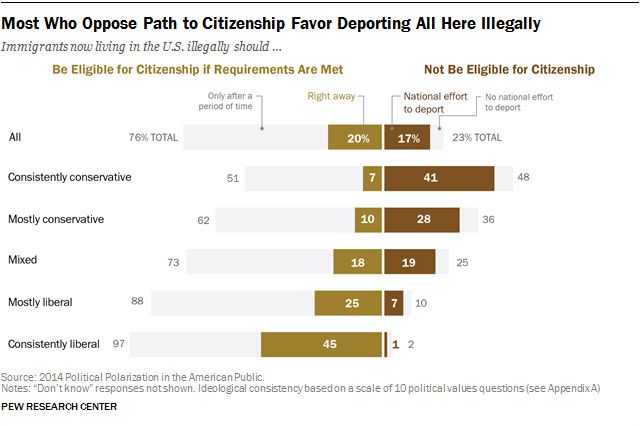 Note that even down-the-line, conservative Republicans are split on the path to citizenship, and every other ideological segment, from moderate conservative to staunch liberal, strongly favors it.

Now, it is true that the voting base in a Republican primary consists not only of conservative Republicans, but of the most conservative of the conservative Republicans. Still, the puzzle remains why the Party leadership, which considers immigration reform vital to its long-term survival, has been unable to move forward when opposition is a minority view even among its own base. The answer can be seen in another polling question from the same Pew survey: 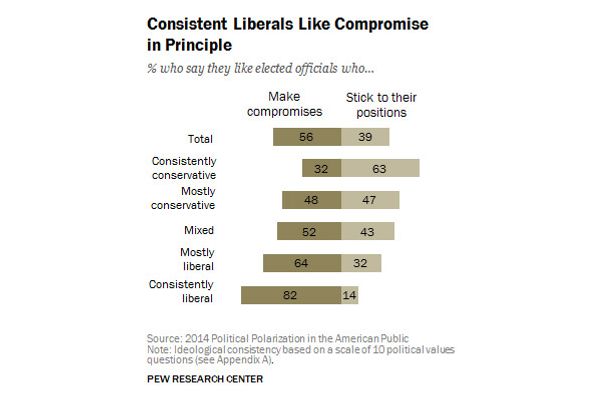 It’s an ideological trait that goes beyond mere hatred for Obama, which is considerable. During the Bush years, why did the conservative base revolt against immigration reform but not the prescription-drug entitlement? Surely one reason, aside from the substance of the two bills, is that immigration reform was a bipartisan effort with the high-profile involvement of right-wing hate figure Ted Kennedy, while the prescription-drug bill was rammed through Congress on a partisan basis.

The conservative revolt against compromise expresses itself constantly. It comes through in the ever-present trope of citing the length of legislation as a primary reason to oppose it. It likewise comes through in the way conservative intellectuals routinely attack bills as a “stew of deals, payoffs, waivers, and special-interest breaks” — which is to say, they hate the fact that passing bills in Congress requires cutting deals with disparate constituencies, which is how legislation works.

The most consistent theme of the attacks on Cantor was that he somehow agreed too much with Democrats. Here’s one ad which, after (falsely) accusing Cantor of agreeing with Tim Kaine and Mark Warner — Democrats! — morphs Cantor’s face into Obama’s:

Cantor grasped the basis of the attack, and tried to fight back by emphasizing his disagreement with Harry Reid and Obama: 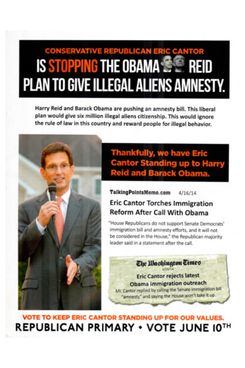 Opposing Cantor because he’s a soulless tool of the economic elite makes sense. Opposing Cantor because he’s too lovey-dovey with Obama is insane. But that, more than any ideology, is the reason Cantor lost, and the reason Republicans have been reportedly forced into legislative strategies — default threats, shutdowns, killing immigration reform — they see as contrary to their own best interest. Even Cantor’s totalistic obstruction is not enough. Conservative Republicans want them to fight, and fight, and fight.