The growth of Snapchat must be killing Mark Zuckerberg. After trying and failing to build a Snapchat-killer last year (the ill-fated Facebook Poke, since buried), Zuckerberg offered $3 billion for the disappearing-photo app. Snapchat turned his money down, stayed independent, and kept on growing: Today, it’s simply enormous, with 700 million snaps being shared by its users every day.

Facebook is the biggest, richest, most established social network in the world, and has in the past been able to dismiss upstart competitors with the flick of a wrist. Which may explain why, today, it took another shot at Snapchat with a messaging app called Slingshot.

There are two main differences between Slingshot and Snapchat. The first is that in order to view the photos and videos your friends send you on Facebook’s Slingshot, you have to first reply to their messages with one of your own. This forced reciprocity makes it impossible to merely be a Slingshot voyeur. You have to trade photo-for-photo, or video-for-video. Facebook hopes this requirement will help the app grow quickly, as new users are pressured off the sidelines by their friends. 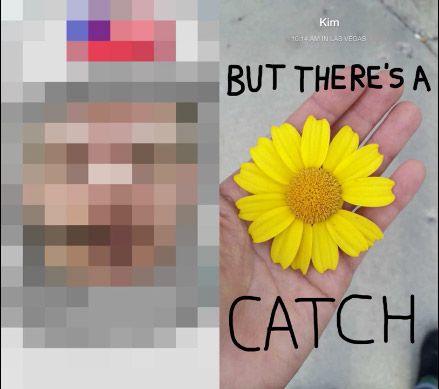 The second difference is that Slingshot has a “select all” option, for sharing your photo with all of your friends at once. Snapchat users have been clamoring for this feature for a long time, and it makes sense that Facebook is including it now. Facebook’s biggest strength is the size of its network — if you want to share a photo of your new cat with everyone in your life, doing it on Slingshot will be a surer bet than doing it on Snapchat.

The worst-case scenario for Slingshot is that it works like Snapchat, but spammier. I don’t necessarily want to be included in mass-photo shares, especially if the app is going to pull in all of my Facebook friends by default. According to the Verge, Facebook’s prerelease tests of Slingshot resulted in “dozens of Slingshot notifications per hour” among those participating. That sounds hellish, frankly, and I hope Facebook will introduce some way to keep certain people or groups from popping up on your phone’s lock screen.

The best-case scenario is that Slingshot takes the spontaneity and goofiness of Snapchat and combines it with the ubiquity of Facebook. I use Snapchat from time to time, and I’d use it more often if all of my friends and family members were using it, too. And since Slingshot’s “send-to-receive” requirement doubles as a growth-hacking tool — it baits you into joining by dangling a mysterious, locked photo in front of you — it could grow faster than Poke did.

For now, Slingshot’s value is mostly in what it tells us about Facebook. The social network has been touting its Creative Labs for months — a subset of engineers and designers within the company who are freed up to experiment with new, quirky stand-alone apps like Paper. Slingshot is only the second project to emerge from Creative Labs, but its gamelike unlocking feature makes it about as weird as anything we’ve seen Facebook do before. Clearly, the division is getting a long leash, and we can expect to see more off-the-wall experiments emerge from it.

Slingshot also tells us that missing out on Snapchat has turned in to something of a psychological complex for Facebook. Mark Zuckerberg coveted Instagram’s visual supremacy and creative user base, and he got it for $1 billion. Zuckerberg coveted WhatsApp’s lightning-fast growth and international messaging platform, and he got it for $19 billion. But Snapchat’s youthful appeal has eluded Facebook, and it’s clearly driving them crazy. If Slingshot doesn’t work out as intended, expect another Snapchat-killer to emerge from Menlo Park in short order.