Liberal reactions to President Obama’s power-plant regulations have spanned a wide gamut. If you listen to, say, the Natural Resources Defense Council, Al Gore, Paul Krugman, or, ahem, me, the Obama administration has taken a momentous step and claimed an honorable legacy in the fight against climate change. If you listen to, say, Elizabeth Kolbert, Brad Plumer, Eduardo Porter, or Ezra Klein, Obama has made a feeble gesture on the path toward near-certain planetary doom. If you’re not sure whom to believe, the answer is that you should believe them all, because we’re all saying the same thing.

There are several ways in which Obama’s power is limited. First, his regulations on power plants might not even stand if the Supreme Court decides to overturn them. Second, if they do go into effect, they will do little good unless they spur the world to some kind of broader agreement to limit carbon emissions, especially in China and other developing countries.

And third, even if Obama can get the Supreme Court and the rest of the world to go along, the world will still need to implement radical changes in its future energy use. Obama has committed the United States to reduce its greenhouse gas emissions by 17 percent below 2005 levels, but it will need to continue falling to 83 percent below those levels by midcentury merely to avoid the most devastating impact of climate change. Switching coal plants to gas can meet the near-term targets, but eventually we will have to switch much of our gas-powered energy to zero-emission sources like wind, solar, and nuclear. Obama is harnessing the growth of shale gas to wage a war on coal. Future administrations will wage a war on gas.

And even that, too, will require even more international coordination. The challenge is truly staggering.

But these daunting facts merely tell us that there is only so much one American president can do. Passing major environmental legislation was probably impossible in 2009 and 2010, when Obama needed the votes of skittish coal-state Democrats to do anything, and is undoubtedly impossible today. He does have regulatory authority, but it is subject to the veto of skittish Anthony Kennedy.

All this is to say that Obama’s power is subject to multiple limits: limits on his legal authority under American law (the strictness of which can’t be known in advance of a Supreme Court ruling); limits on the authority of American law itself, which excludes direct power over the 85 percent of carbon dioxide emitted by other countries; and temporal limits over the ability of his laws to compel future generations.

So what is it that Obama can do? The first task is to craft a regulatory agenda that is strong enough to fulfill the commitments he made at Copenhagen in 2009 — opening the door for next year’s international climate negotiations to succeed — while anodyne enough to avoid the kind of generalized right-wing freakout that might lead Kennedy to strike down his regulations the way he voted to strike down health-care reform. Indeed, since the costlier his regulations, the higher the risk of a Supreme Court reversal, it follows that Obama’s smartest play is to clear the Copenhagen threshold by the barest amount he can. That is, more or less, what he has done.

Even if Obama had unlimited power to rewrite American energy policy, could he really commit the United States to the sort of emissions targets it will need to hit decades into the future? You can write a regulatory plan to hit targets five or ten years down the road, but if you lack specific, economically feasible ways to carry it out, then what you have is an aspiration, not a commitment.

This is not to absolve Obama of any responsibility for the long-term future. He needs to set the predicate for the long-term green revolution as best as he can. Time will tell, but I believe he’s done a reasonably good job of this. Michael Grunwald has an excellent, unfortunately paywalled Time story detailing the growth of solar energy under Obama, helped along by $90 billion of green energy investment in the stimulus. Solar energy has grown radically cheaper and is rapidly approaching economic parity with traditional sources of energy: 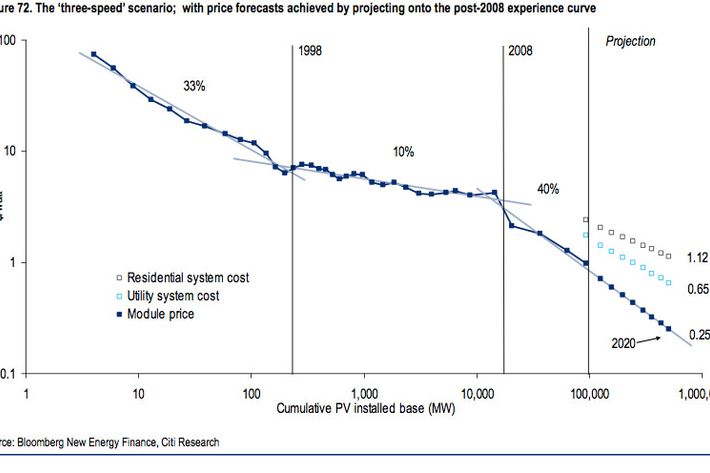 Obama’s policies have helped set the stage for the solar revolution, but there’s only so far its growth can go when it started at essentially zero.

Meanwhile, the regulatory structures his administration announced Monday, should they survive, will hopefully be seen as durable and effective enough to be built upon and tightened in the future. Obama is building a policy response to carbon pollution that is also starting at zero.

Porter concludes his downbeat column, “And yet to make progress one must first take the road. Baby steps will not take the world where we need to go.”

+Comments Leave a Comment
Has Obama Saved the Earth, or Doomed It?