The endless conservative quest to locate new and ever-more-exotic reasons to hate Obamacare has discovered virgin territory: The health-care law is crushing the economy by brutally suppressing the growth of the health-care sector. This promising new discovery is explicated in today’s Wall Street Journal editorial page, which seizes upon yesterday’s news that the health-care sector unexpectedly shrank to decry “ObamaCare’s role in nearly sending the economy back into recession.” This may be the single most bizarre argument yet produced against the Affordable Care Act.

The backdrop to this is that Obamacare has always had two large goals. The first is to provide access to regular medical care to those too poor or sick to buy it on their own. The second is to slow down the long-term growth of health care, which costs far more in the United States than anywhere else in the world.

Around the time the Affordable Care Act first passed Congress, conservatives directed much more of their skepticism toward the second goal than the first. They doubted everything about the health-care law, but they were particularly incredulous at its claims that it could simultaneously expand coverage while tamping down medical inflation. Obviously, there is some tension between the two goals — providing insurance to people who didn’t have it will, by itself, increase health-care spending. The law envisioned a combination of reforms that would “bend the cost curve” to clear room for the one-time influx of new patients into the system. Right-wing critics were certain that the law would increase medical inflation. (The Journal last January: “The subsidized insurance rollout and the new mandate to buy richer benefits than before will boost spending. Enjoy the slowdown while it lasts.“)

A couple months ago, conservatives had an aha! moment when an initial report suggested that health-care spending had spiked in the first quarter of 2014. A one-time jump in health-care spending had been expected all along, but its arrival brought a chorus of triumphant cries from the right. “The rise in costs and rate of growth,” gloated the Weekly Standard, “calls into question claims from supporters of the federal health care law, including President Obama, who claimed Obamacare would ‘bend the cost curve’ and slow down the rate of growth in health care spending.” Ira Stoll, Philip Klein, and many others echoed the theme.

But the original estimate of rising health-care spending in the first quarter turns out to have been very, very wrong. The revised data shows that health-care spending actually shrank in the first quarter. In the short run, this is bad news. The economy is still climbing out of a recession, demand is too low, and any spending is good. In the long run, this is extremely good news for the federal budget. It’s the latest piece of evidence that health-care spending is growing at a slower rate than even the most optimistic forecasters predicted four years ago. We can debate the degree to which Obamacare’s reforms are responsible for this cost slowdown, and how much of it will persist when the labor market has fully recovered from the shock of the Great Recession.

Klein, alone, has had the intellectual integrity to acknowledge that the revisions to the data nullify his initial first impression that costs were spiking. Other conservatives who shouted joyously at the apparent spike have gone silent. 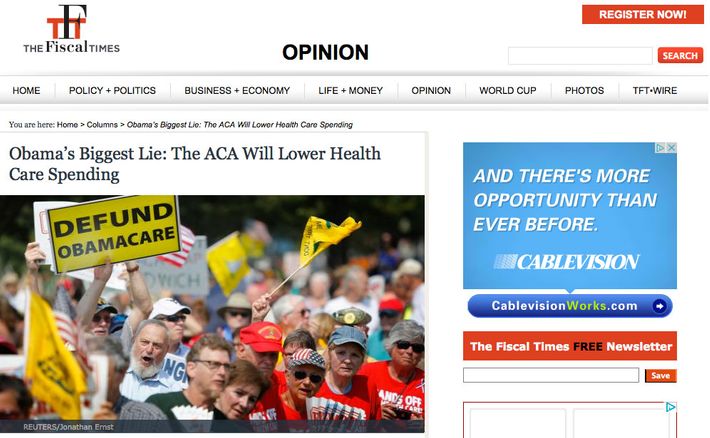 Not since 1980 has the American economy seen such a rapid expansion of health-care spending. It rose at an annualized rate of 9.9 percent, are outstripping inflation and standing in stark contrast to other components of the BEA report. …

This, however, ignores one of the key stated purposes of pushing for the top-down, command-economy overhaul of the American health-care system: bending the cost curve downward. 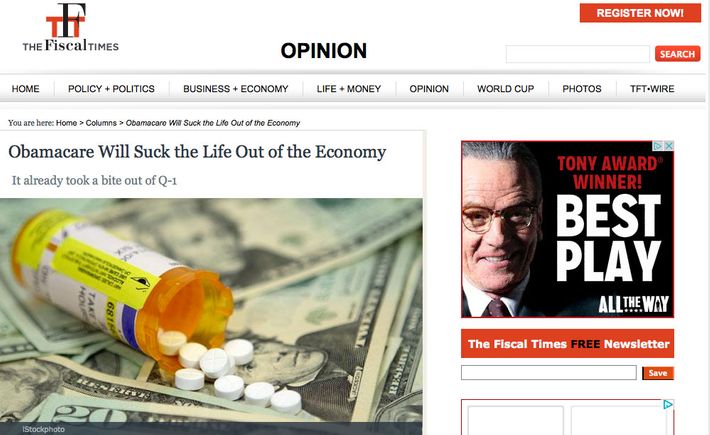 The lack of increased consumer spending on health care indicates that the economy-tamping effects of Obamacare will outstrip whatever consumer impulses it produces, even when consumer use should be highest as people gain coverage and can access provider networks for the first time.

If you suspect there is literally no imaginable set of facts that would make conservatives admit Obamcare is working as designed, you’re right.

+Comments Leave a Comment
Most Shameless Anti-Obamacare Argument Yet

THE FEED
29 mins ago
brittney griner
brittney griner
Brittney Griner Pleads Guilty, Faces 10 Years in Prison
By Matt Stieb
Now it’s up to the Biden administration to get her out of Russia.
1:12 p.m.
elon musk
elon musk
Is Elon Musk Trying to Populate Mars Himself?
By Sarah Jones
The mogul fathered twins with a Neuralink employee.
12:50 p.m.
foreign interests
foreign interests
Boris Johnson Wants to Keep Partying a Little Longer
By Benjamin Hart
The extremely embattled PM announced his intention to resign — in a few months.