So young, so full of promise. Photo: Alex Wong/Getty Images

The conservative view of President Obama has straddled two difficult-to-reconcile portraits. One indicts him as a “Reagan of the left,” fundamentally (and, in their view, disastrously) altering the shape of the state. The other casts him as a hapless mediocrity, a Jimmy Carter redux. At the moment, the latter view is more in evidence — just in the last week, columns have appeared with headlines like “Is It Too Late for Obama to Rescue His Legacy?” and “The Failed Presidency of Barack Obama.”

On January 20, 2009, when Obama delivered his inaugural address as president, he outlined his coming domestic agenda in two sentences summarizing the challenges he identified: “Homes have been lost, jobs shed, businesses shuttered. Our health care is too costly, our schools fail too many, and each day brings further evidence that the ways we use energy strengthen our adversaries and threaten our planet.” Those were the four major areas of domestic reform: economic recovery measures, health-care reform, a response to climate change, and education reform. (To the justifiable dismay of immigration advocates, Obama did not call for immigration reform at the time, and immigration reform is now the only possible remaining area for significant domestic reform.) With the announcement of the largest piece of his environmental program last Monday, Obama has now accomplished major policy responses on all these things. There is enormous room left to debate whether Obama’s agenda in all these areas qualifies as good or bad, but “ineffectual” seems as though it should be ruled out at this point.

Certainly, when Obama unveiled his domestic ambitions, few thought to accuse him of setting the bar too low. In a speech before a joint session of Congress a month after his inauguration, which was the incoming president’s version of a State of the Union Address, Obama identified those same four priorities in more detail. This was about the time conservatives began to completely freak out; Charles Krauthammer, a voice of relative sobriety, called his speech “the boldest social democratic manifesto ever issued by a U.S. president.”

It was not that, but Obama did call for quite a lot to get done. The response to the great recession included an $800 billion stimulus, a bank reorganization, the Dodd-Frank financial regulations, and the auto bailout. None of these measures completely satisfied anybody, but the failure of any of them might well have triggered a deep, Great Depression–like meltdown. Obama’s education reforms, while significant, have had a more modest effect. His race-to-the-top grants, tucked into the stimulus, unleashed a wave of standards-based reform nationally. He has made more modest progress in bringing accountability and broader access to pre-Kindergarten and college education; I predict Hillary Clinton will pick up the call for universal pre-K as a centerpiece of her 2016 domestic platform.

I’ve written quite a bit recently about Obama’s environmental agenda. One can question whether it will survive a legal challenge or successfully culminate in international cooperation, but there’s no doubt that it has fulfilled his original goal. In 2009, Obama promised to “double this nation’s supply of renewable energy in the next three years.” Since then, wind capacity has tripled and solar capacity increased 16-fold. He likewise called for “a market-based cap on carbon pollution,” which is exactly what the new power-plant regulations would create.

Health-care reform has been the most controversial initiative of Obama’s presidency. Conservative opponents of national health insurance, and left-wing critics who object to government subsidy of private insurance, can still object philosophically to Obamacare’s objectives, but there is no doubt that he is achieving them. Obama time and again defined two major goals for health-care reform: tamping down rising medical costs, and expanding access for those who couldn’t afford it. The uninsured rate is dropping: 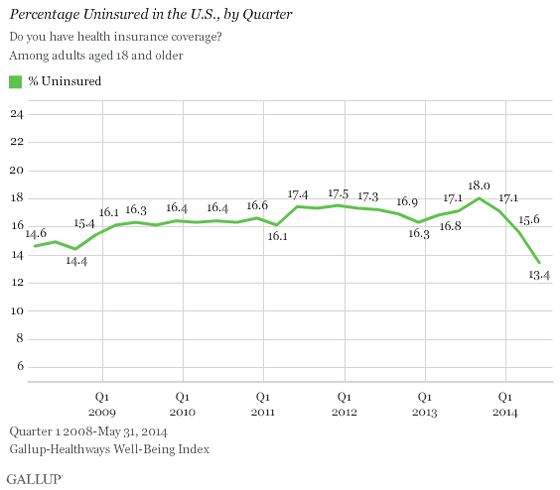 And medical inflation has fallen to its lowest rate in half a century: 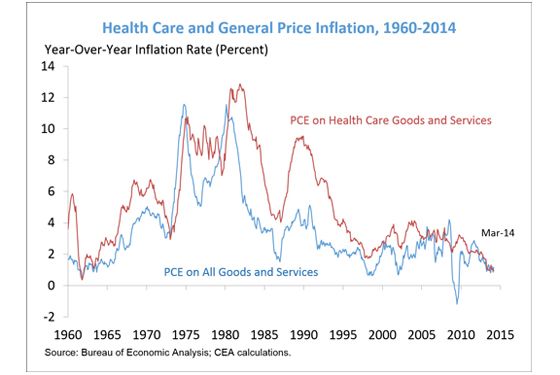 More insurers are planning to enter the markets, and the widespread price hikes conservatives confidently predicted appear unlikely. Republicans have slowly begun reconciling themselves to the law’s irreversibility. Republican pollsters are advising their candidates to soften their anti-Obamacare rhetoric; even as implacable a critic as Mitch McConnell has obscured his position on repealing the law.

All of Obama’s domestic reforms involved compromises and imperfections, a quality they have in common with every major accomplishment in history. Also like the major accomplishments of the past, Obama’s will undergo future revision. All will continue to generate some level of conservative recrimination — one can still find conservatives here and there determined to phase out Social Security or outlaw the U.S. income tax. Most of them will recede into the backdrop of the policy landscape and eventually serve as the baseline against which to portray future liberals as the true radicals, just as Republicans now embrace Medicare. It is also possible that the remaining two and a half years will envelop Obama in some kind of disaster, like Iran-Contra, Vietnam, or Watergate. What’s no longer possible is to imagine that historians will look back at Obama’s presidency and conclude not much got done.

THE FEED
11:55 a.m.
early and often
early and often
Trump, Who Once Said ‘the Mob Takes the Fifth,’ Takes the Fifth
By Margaret Hartmann
The former president says he has finally learned about the value of the Fifth Amendment after repeatedly mocking people who invoke it.
11:21 a.m.
early and often
early and often
The Heir to Bernie?
By Ross Barkan
The career of America’s leading socialist has to end at some point, and he might have a worthy successor in Vermont’s own Becca Balint.
11:02 a.m.
the money game
the money game
Pretty Soon You’ll Be Able to Afford Things Again
By Kevin T. Dugan
July’s inflation rate saw an unexpectedly large drop, driven by the price of gas. This could be the beginning of the end of the era of high prices.

10:04 a.m.
what we know
what we know
Trump’s Mar-a-Lago Raided by FBI: Everything We’ve Learned
By Intelligencer Staff
Federal agents were reportedly suspicious that Team Trump was withholding information on possible classified information taken from the White House.
10:00 a.m.
the city politic
the city politic
Dan Goldman on the Problem With Trump, Republicans, and Members of His Own Party
By Nia Prater
The veteran federal prosecutor tries politics.
9:00 a.m.
what is elon musk?
what is elon musk?
SpaceXCadets
By Sarah Jones
If you want your child to become the next billionaire industrialist, Astra Nova might be a good place to start.
8:00 a.m.
what is elon musk?
what is elon musk?
Musk As Muse
By Fran Hoepfner
Elon’s romantic partners keep putting him into their art.
8/9/2022
2022 midterms
2022 midterms
Senate Control Could Come Down to a Georgia Runoff Once Again
By Ed Kilgore
If neither Raphael Warnock nor Herschel Walker wins a majority in November, which looks plausible, they’ll face off in a December runoff.
8/9/2022
crime
crime
Police Arrest Suspect in Killings of Muslim Men in Albuquerque
By Benjamin Hart and Nia Prater
At least three Muslim immigrants have been ambushed and killed in recent weeks, terrifying the local community.
8/9/2022
exhibit a
exhibit a
Making Sense of the Trump Raid
By Ankush Khardori
After a summer of intense criticism, Merrick Garland’s Justice Department takes its boldest step yet in pursuit of the former president.
8/9/2022
the power trip
the power trip
What’s in Trump’s Safe the FBI Raided?
By Olivia Nuzzi
Former aides consider the contents of the vault at Mar-a-Lago.
8/9/2022
early and often
early and often
2022 Midterms: A Guide to the Races Worth Watching
By Ed Kilgore
A cheat sheet to keep track of all the crucial races, primary upsets, and campaign drama — Trump-fueled and otherwise — from now through Election Day.
8/9/2022
mar-a-lago raid
mar-a-lago raid
Convicted Felons Are Leaping to Trump’s Defense
By Matt Stieb
Fellow politicians and operatives who also had run-ins with the Feds are claiming him as one of their own.
8/9/2022
the national interest
the national interest
What Is Really Unprecedented Is Trump’s Criminality
By Jonathan Chait
Republicans are angry at the FBI, but they choose to yoke themselves to a flagrant crook.
8/9/2022
early and often
early and often
Republicans Go to the Mattresses to Defend Trump From the Feds
By Ed Kilgore
The gestures of loyalty to Trump and fury at law enforcement by leading Republicans with no idea of the raid’s purpose or findings are revealing.
8/9/2022
goat
goat
Serena Williams Announces Her Retirement From Tennis
By Claire Lampen
In a Vogue essay, she says she plans to step away from the sport after the U.S. Open wraps next month.
8/9/2022
the city politic
the city politic
Yuh-Line Niou on Her Especially Personal Run for Congress
By Nia Prater
From representation to disability policy, she says there’s a common theme: Courage.
8/9/2022
games
games
The Mets Are Having an Extremely Un-Mets Season
By Will Leitch
They’re overachieving their way to the playoffs — and having a great time doing it.
8/9/2022
what is elon musk?
what is elon musk?
Musk and Trump and a Little Steve Jobs
By Chris Lee
The characterological origins of Tony Stark.
8/9/2022
what is elon musk?
what is elon musk?
Elon’s Biggest Boondoggle
By Alissa Walker
Why did the world’s richest man spend the past five years trying to sell cities a hole in the ground?
8/8/2022
unsolved mysteries
unsolved mysteries
The Bodies Keep Piling Up at Lake Mead
By Chas Danner
Four sets of human remains have now been discovered in the rapidly receding reservoir since May.
8/8/2022
early and often
early and often
Will Democrats’ Sudden Legislative Success Matter in the Midterms?
By Ed Kilgore
With the passage of the Inflation Reduction Act and gas prices dropping, Democrats’ odds of success in November’s elections are looking up.
8/8/2022
early and often
early and often
Photos of Trump Notes in Toilet Were Better Left to the Imagination
By Margaret Hartmann
Reporters were so preoccupied with whether they could find these pictures that they didn’t stop to think if they should.
8/8/2022
early and often
early and often
The GOP Is the Party of Insulin-Gouging
By Ross Barkan
In their quest for zero-sum victories — and Democratic defeats — Republicans are incapable of tackling popular issues that would benefit them.
8/8/2022
the city politic
the city politic
Carlina Rivera on What Democrats Get Wrong About Latino Voters
By Nia Prater
A daughter of the Lower East Side runs to represent the district where she grew up.