Conservatives spent years predicting Obamacare would collapse in all manner of gloomy scenarios. But those predictions all occurred in the run-up to the project going online, on the basis of sketchy, preliminary data or pure conjecture. In the months since the law has come into effect, a steady stream of far more solid data has come in, and the doomsaying predictions are being hunted to extinction. The right’s ideological objections to Obamacare remain, but I can’t think of a single practical analytic claim they made that still looks correct.

1. Obamacare is mostly just signing up customers who already had insurance. The basis for this claim was a preliminary survey conducted by McKinsey last year, well before the first enrollment period for Obamacare was complete. It generated massive coverage in the right-wing media. Since then, newer data has shown much higher figures. A Kaiser Family Foundation survey finds that 57 percent of enrollees lacked insurance previously.

2. Obamacare isn’t even significantly reducing the ranks of the uninsured. This claim built on the previous one — it combined the prediction that few people would sign up for new coverage with the prediction that those who did were mostly insured. “CBO has projected that 14 million previously uninsured Americans would gain coverage under the law. With about ten weeks left in this year’s enrollment period, we’re looking at a coverage expansion of less than a million,” suggested Republican health-care adviser Avik Roy.

Measuring the population lacking insurance is historically complex and imprecise, but we now have a bevy of measures showing that Obamacare has already made a huge dent in the uninsured population. Gallup has showed the uninsured rate dropping by about a quarter. A report finds that the uninsured rate in Minnesota has fallen by 40 percent. A study of numerous cities by the Robert Woods Johnson Foundation projects declines of about 60 percent by 2016 in municipalities whose states expanded Medicaid, and half of that in states where Republicans have maintained the party’s boycott of Obamacare. 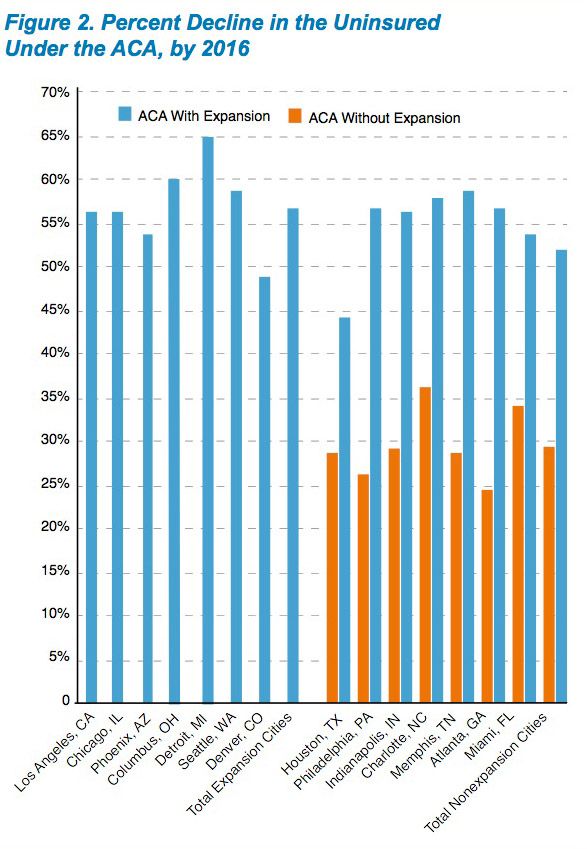 3. Insurance will be so expensive that few people will want to buy it. We spent weeks and weeks debating “rate shock.” Also, nope. The average plan purchased on exchanges costs customers only $82 a month. A Kaiser Family Foundation survey of people who used to have individual insurance and now have the regulated insurance on the exchanges — finds that the number of customers reporting lower premiums exceeds the number paying higher premiums.

4. But premiums will shoot up next year! As premiums have turned out to be cheap — indeed, cheaper than initially projected — Obamacare skeptics slowly retreated to a new prediction: Rates would rise next year.

Another nope. As state-by-state information trickles in, it appears conservatives won’t get the premium spike next year, either. Insurers are jumping into the market, putting downward pressure on prices. Expected premium increases appear to be on par with, or perhaps a bit lower than, historic levels: 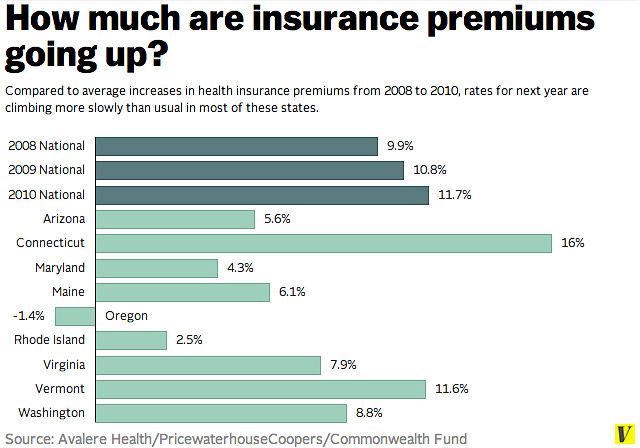 Will all this data produce a grand bipartisan consensus on Obamacare? Of course not. Nor should it. The practical objections to Obamacare are collapsing, but the philosophical ones remain in place. Suppose you strongly objected to the idea that your city should own a bunch of buildings where people can go borrow books for free. (Some people do!) If you couldn’t persuade a majority of fellow citizens of your conceptual objections to libraries, you might try arguing that the library scheme was doomed to collapse in cost overruns, or that nobody would ever use them, or that shelves of heavy books would be routinely toppling over and killing small children. But the fact is that running buildings where people can check out books, and running exchanges where people can purchase basic health insurance packages, are both things that governments can do.

And so conservative objections to Obamacare are finally turning from the practical to the philosophical. In response to reports that Obamacare insurance turns out to be affordable, Roy, who has spent months warning of rate shock, mocks that “other people’s money will pay for it.” Conservative columnist Byron York likewise argues “Obamacare’s ‘good news’ applies only to the poor.”

It is true that Obamacare is far more helpful to people lower down the income scale. The poorest people get Medicaid, which is free. Those higher up the income ladder get tax credits, which phase out at $45,000 a year for an individual, and $94,000 a year for a family of four. (I wouldn’t call people earning under those levels “poor.”) Of course, people who get employer-sponsored insurance also get their coverage paid for with “other peoples’ money.” The difference is that employer-sponsored insurance uses a tax deduction, which gives the largest benefits to those who earn the most money, as opposed to Obamacare’s sliding-scale tax credit, which gives the most to those who earn the least.

But at least conservatives are now representing their true bedrock position on Obamacare. It is largely a transfer program benefiting people who either don’t have enough money, or pose too high a health risk, to bear the cost of their own medical care. Conservatives don’t like transfer programs because they require helping the less fortunate with other peoples’ money.

THE FEED
8:00 a.m.
the money game
the money game
The Crypto Geniuses Who Vaporized a Trillion Dollars
By Jen Wieczner
Everyone trusted the two guys at Three Arrows Capital. They knew what they were doing — right?
12:05 a.m.
what we know
what we know
Top-Secret Documents at Trump’s Mar-a-Lago: What We Know
By Intelligencer Staff
The search warrant used by the FBI was unsealed, and it shows potential violations of the Espionage Act.
8/14/2022
what we know
what we know
Salman Rushdie Is on the ‘Road to Recovery’ Following Gruesome Attack
By Chas Danner and Victoria Bekiempis
The acclaimed author was grievously wounded and remains hospitalized but was taken off a ventilator and again able to speak on Saturday.

8/14/2022
the city politic
the city politic
New York Times Sticks It to Progressives in New York’s Democratic Primary
By Ross Barkan
The editorial board’s backing of Dan Goldman, Jerry Nadler, and Sean Patrick Maloney for Congress also shows a disdain for identity politics.
8/14/2022
u.s. capitol
u.s. capitol
Man Dies by Suicide After Driving Car Into Barricade Near U.S. Capitol
By Chas Danner
The man drove into a barricade and fired a gun in the air, but police don’t seem to believe he was targeting any members of Congress.
8/13/2022
the group portrait
the group portrait
The Subtle Differences of the Many Candidates for New York’s 10th District
By Errol Louis
It’s a very crowded race for one of the city’s most progressive districts.
8/13/2022
tremendous content
tremendous content
Trump Raid Can Satisfy Your O.J. Simpson–Scandal Nostalgia
By Margaret Hartmann
The latest sign the ’90s are back: a divisive scandal that ends with a guy going down for stealing his own memorabilia.
8/13/2022
the money game
the money game
Are We in a Recession or a Vibecession?
By Kevin T. Dugan
Some of the numbers are good, but the feelings are bad.
8/12/2022

8/12/2022
Joe Biden’s Best Week Ever
By Jonathan Chait
8/12/2022
early and often
early and often
Biden’s on a Roll. So When Will He Become Popular Again?
By Ed Kilgore
The president remains far from the kind of job-approval numbers associated with the three presidents who escaped midterm misery.
8/12/2022
early and often
early and often
Read The Unsealed Trump Search Warrant
By Nia Prater
Agents removed boxes of documents with “top secret” information inside.
8/12/2022
inflation reduction act
inflation reduction act
IRA Is Already Taken, Democrats
By Nate Jones
The party needs a name for its bill that doesn’t summon images of Joe Manchin in a balaclava.
8/12/2022
crypto
crypto
At What Point Do You Become a Money Launderer?
By Kevin T. Dugan
A software developer was arrested for “involvement” in a crypto program allegedly used by North Korea to launder money but isn’t accused of the crime.
8/12/2022
public health
public health
It Looks Like There’s Polio in New York City
By Matt Stieb
Wastewater data suggests the virus is probably spreading among the unvaccinated in the five boroughs.
8/12/2022
past is prologue
past is prologue
Trump Allies’ Post-Raid Probe Won’t Be Anything Like the Church Committee
By Ed Kilgore
The ’70s panel the GOP keeps referencing was a broad, bipartisan review of intelligence agencies. The MAGA version would just target Trump’s enemies.
8/12/2022
plagued
plagued
Paging Dr. Normalcy
By James D. Walsh
Ashish Jha, the COVID czar, wants to make vaccines great again.
8/12/2022
what is elon musk?
what is elon musk?
An Elon Musk Photo Book
By Choire Sicha
Let’s stare at Elon Musk.
8/12/2022
what is elon musk?
what is elon musk?
A Close Read of @elonmusk
By Devin Gordon
What the Tesla founder’s Twitter feed reveals about the man behind the handle.
8/12/2022
the national interest
the national interest
Joe Biden’s Best Week Ever
By Jonathan Chait
His presidency is suddenly shaping up to be a resounding success.
8/11/2022
early and often
early and often
The Bad News for Democrats on Crime and Immigration
By Ed Kilgore
Pollster Stan Greenberg says the midterm landscape has improved for Democrats, but they need to find more credible positions on certain issues.
8/11/2022
early and often
early and often
Merrick Garland Wants to Release the Trump Warrant
By Justin Miller
Attorney General Merrick Garland calls Donald Trump’s bluff regarding the FBI’s search of Mar-a-Lago.
8/11/2022
the national interest
the national interest
Wall Street Journal Columnist Says Presidential Houses Are Free-Crime Zones
By Jonathan Chait
The most persuasive defense of Trump yet.
8/11/2022
what we know
what we know
Jan. 6 Protestor Accused of Attacking FBI Office in Cincinnati
By Intelligencer Staff
The suspect, who appears to have posted about killing FBI agents, was killed in a police shoot-out after the attempted break-in.
8/11/2022
life after roe
life after roe
The Anti-Abortion Movement’s Divisions Suddenly Have Huge Consequences
By Ed Kilgore
Fights over rape-incest exceptions and when exactly life begins are in danger of undermining already low popular support for abortion bans.
8/11/2022
what is elon musk?
what is elon musk?
‘I Don’t Talk to Any of My Normal Friends About This’
By Alex Yablon
Two members of Elon Musk’s Twitter army explain their decision to enlist.
8/11/2022
what is elon musk?
what is elon musk?
‘I Began Just Losing Money Every Day’
By Jen Wieczner
Four short sellers on the specific agonies of betting against Elon Musk.