“It is widely known Rep. Frank D. Lucas is no longer alive and has been displayed by a look alike,” congressional challenger Timothy Ray Murray explained in a statement on his bonkers website (previewed above) following Tuesday’s primary in Oklahoma. “Rep. Lucas’ look alike was depicted as sentenced on a white stage in southern Ukraine on or about Jan. 11, 2011.” He keeps going, in various colors, with erratic capitalization.

Murray claims to be challenging the election on these grounds, although he has not filed a formal petition. He also promises, “I will NEVER use Artificial Intelligence look alike to voice what. The Representative’s Office is doing nor own a robot look alike.” (No clue.) 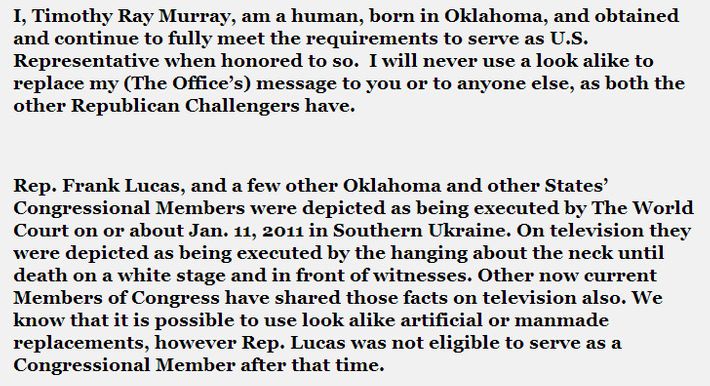 “Many things have been said about me, said to me in the course of all my campaigns,” said Lucas in a statement. “This is the first time I’ve ever been accused of being a body double or a robot.” He added, “I’ve never been to Ukraine.” And, just in case, a spokesperson told HuffPost, “I can assure you that the congressman is alive.” No gray area here.

Lucas won more than 82.8 percent of the vote this week, while Murray received 5.2 percent. That means 3,442 people voted for Murray, whose website, once again, looks like this. America!

THE FEED
21 mins ago
the national interest
the national interest
It’s Republicans Who Won’t Negotiate Over the Budget Deficit
By Jonathan Chait
The other big lie in this hostage crisis is hiding in plain sight.
8:00 a.m.
the system
the system
The Government’s Telling Response to Tyre Nichols’s Death
By Zak Cheney-Rice
The reforms being considered would probably not have prevented his killing. But officials have gotten better at preempting outrage.
1/31/2023
creature capers
creature capers
The Hunt Is on to Find the Dallas Zoo Bandit
By Matt Stieb
Police are looking for whoever is responsible in a strange crime wave in which animals have been killed and apparently stolen from the zoo.