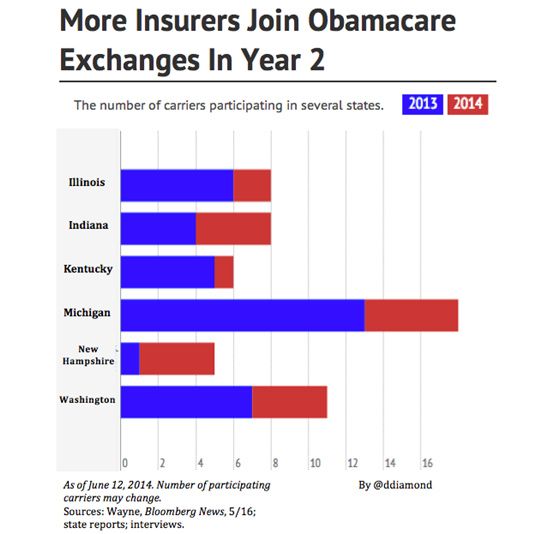 As Larry Levitt explains, this is a big deal for the success of the program:

1. If new insurers have lower premiums, that may drive down the price for the 2nd lowest cost plan, the benchmark for subsidies. (2 of 4)

2. New insurers will provide choice where it didn’t exist before (e.g. NH). Matters less where there was already lots of choice. (3 of 4)

3. Entrance of a major insurer (e.g. Wellmark in IA and SD) brings marketing muscle that should increase enrollment. (4 of 4)

I have made this point repeatedly, but it’s fundamental enough to bear repeating: The information environment surrounding Obamacare is fundamentally asymmetrical. The liberal policy wonks reporting on the program have made a good faith and highly successful effort to depict both the good and the bad news about the program in context. Conservatives, even the most wonkish ones, have engaged in a one-sided propaganda effort. If you get your news about Obamacare from conservative sources, you have heard an endless succession of horror predictions that, when not borne out, have gone uncorrected. The bottom line is that the program is doing what it was designed to do.