This year, as they have done annually since the dawn of time, the judgmental humans of California’s Sonoma-Marin Fair crowned the World’s Ugliest Dog. 2014’s winner is Peanut, a 2-year-old North Carolina mutt (obviously) who beat out 29 other weirdos with his “wild white and brown hair, bulging eyes and protruding teeth,” as the AP put it.

Peanut’s owner, Holly Chandler, said that the little champion was also “seriously burned” as a puppy. He spent nine months in a shelter before she rescued him. “We’re trying to use him as a poster child for what can happen to animals who are abused,” Chandler explained. The dog — who is said to have a “sweet, energetic personality” — will receive a $1,500 prize to to pay for veterinary bills. Here’s another shot: 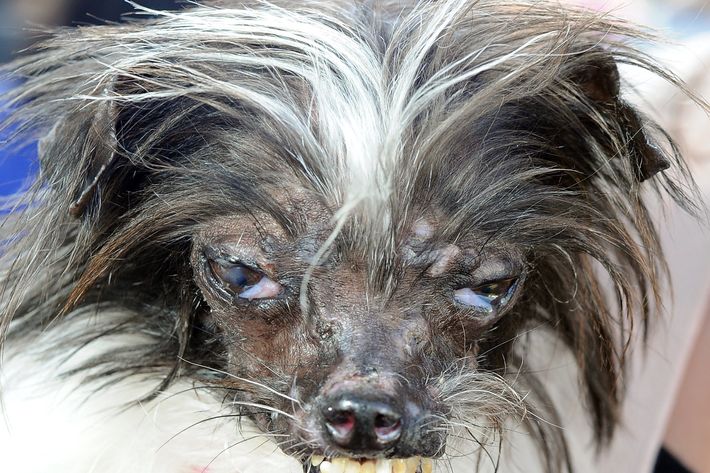 While we’re happy for Peanut, this seems like a good time to mention that this contest can be a little confusing to observers, since all dogs are cute.

THE FEED
12 mins ago
the city politic
the city politic
Yuh-Line Niou on Her Especially Personal Run for Congress
By Nia Prater
From representation to disability policy, she says there’s a common theme: Courage.
9:30 a.m.
games
games
The Mets Are Having an Extremely Un-Mets Season
By Will Leitch
They’re overachieving their way to the playoffs — and having a great time doing it.
9:00 a.m.
what is elon musk?
what is elon musk?
Musk and Trump and a Little Steve Jobs
By Chris Lee
The characterological origins of Tony Stark.