Republicans have two big demographic problems. The first is that the younger cohort of voters doesn’t have nearly as many white voters as the older ones who are dying off. The second problem is that the younger whites who do enter the electorate are not nearly as conservative as older whites.

The New York Times has a story that would seem to offer hope to Republicans that their problem may be solved. But it doesn’t really say what it appears to.

Headlines often make more sweeping claims than the text that follows, and in this case the gap is unusually wide. The headline reads, “Why Teenagers Today May Grow Up Conservative.” The article is built around a really nifty infographic showing that voters tend to form their political allegiances early in life and maintain them throughout. But the data is limited to white voters, for the simple reason that nonwhite voters tend to vote Democratic no matter when they were born. 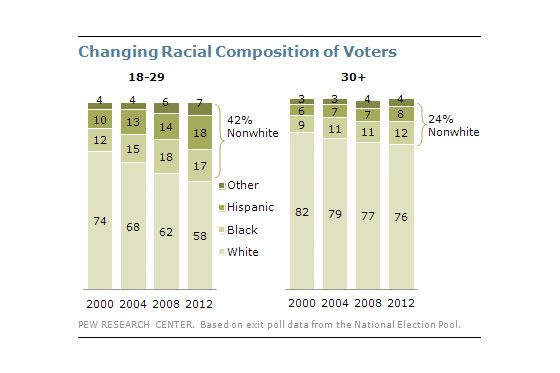 Plus, of course, “may” is another very important caveat. The thrust of the data and the accompanying article is that events can profoundly shape the political orientation of (white) voters. It is possible that young voters coming of age during a sluggish economic recovery may lean conservative. Indeed, it’s nearly certain that voters in the post-Obama age won’t be as liberal as the ones whose formative memories were the comprehensive terribleness of George W. Bush.

But the question is whether those young white voters will form the kinds of overwhelmingly conservative voting habits that would be needed to counteract their shrinking proportion of the electorate. And right now, there’s no sign of anything like that.