To the editors: I am writing this 800 page letter to express my displeasure with the following article… Photo: Chip Somodevilla/Getty Images

In December, 2012, the Natural Resources Defense Council released a groundbreaking plan for how the Environmental Protection Agency could regulate greenhouse gas emissions from existing power plants. The conventional wisdom before the EPA’s plan held that the agency’s only legal option involved prohibitively expensive mandates. Almost immediately after the plan came out, I somewhat accidentally learned that high-level policymakers in the Obama administration were aware of it, and — while they were cagey about it — seemed intent on crafting a plan along the lines the NRDC proposed. I wrote a story for the magazine explaining how this would work and how it would fit with the administration’s agenda.

What I suspect, but don’t know for a fact, is that the NRDC plan supplied the administration with this idea. If this is what happened, then a few policy wonks at the NRDC changed the course of history. I tried to report out the story, but ran into fierce denials from officials at the Environmental Protection Agency, who insisted that they developed the standards almost entirely independent of the NRDC. I suspected the EPA was spinning me, perhaps out of a fear that conceding such a heavy influence to the NRDC would somehow weaken their defense against the coming legal challenge. But I also lacked the reporting to countermand the EPA — which, as they pointed out to me, consisted of the people who were in the room when the regulation was made — so I dropped the story.

Coral Davenport — who, unlike me, is a fantastic reporter — went on to write that story for the New York Times, reporting that the EPA “used as its blueprint” the NRDC’s plan. The article quotes the EPA contesting that premise, and the agency has been publicly challenging it. Administrator Gina McCarthy has sent around a staff-wide email lambasting the report.

I couldn’t confirm the genesis of the EPA’s proposal solidly enough to report it as fact. The Times story does not actually contain hard proof that the NRDC plan formed the basis for the EPA’s decision. I would guess that Davenport’s sources gave her some off-the-record confirmations that she couldn’t publish. My belief that Davenport has this right is bolstered by two other things. One is that, as Eric Wolff points out, the EPA plan mirrors the NRDC plan very closely in its design: 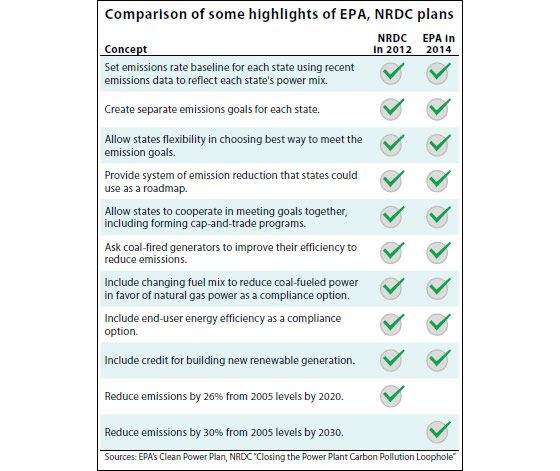 The main difference is that the EPA’s version is weaker.

Second, the accounts the EPA provided me were at odds with what was widely known among environmentalists and the energy lobby in 2013. Those insiders knew that the EPA was working on regulations of existing power plants. The EPA painted a story of a regulatory process that worked on a much slower time frame than the one those insiders believed was occurring (and which, as noted above, I had caught wind of).

So I believe the Times’ claim, but I can’t prove it, and the Times hasn’t proven it, either. The NRDC finds itself in the awkward position of not being able to claim full credit for what probably ranks as the most important policy triumph ever recorded by an American advocacy organization.

THE FEED
5 mins ago
the money game
the money game
Did Elon Musk Give Up Because His Silicon Valley Friends Were Humiliated?
By Kevin T. Dugan
His months-long legal odyssey to get out of buying the company at the original price of $54 a share appears to be over. The timing is interesting.
12:09 p.m.
early and often
early and often
Can Herschel Walker Survive the Implosion of His Heroic Image?
By Ed Kilgore
After a steady drip of negative stories, Walker has now been hit with dual bombshells: abortion allegations and attacks from his own son Christian.
11:43 a.m.
politics
politics
Herschel Walker’s Son Goes Nuclear on His ‘Lying’ Father
By Nia Prater
After a story about the candidate’s alleged payment for an abortion, Christian Walker went off in a series of tweets.

8:00 a.m.
u.s. supreme court
u.s. supreme court
The Supreme Court Is Back and Ready to Do More Damage
By Ed Kilgore
If reproductive freedom was the major casualty of the last term of the Court, racial justice could be most at risk now.
10/3/2022
early and often
early and often
Why Trump Nicknamed Letitia James ‘Peekaboo’: 6 Theories
By Margaret Hartmann
There’s a lot of speculation about what Trump’s lazy nickname for the New York AG really means (but it’s probably just racist).
10/3/2022
tremendous content
tremendous content
Elon Musk Tries to End the War in Ukraine by Posting
By Matt Stieb
The serial entrepreneur tries on diplomacy with a Twitter poll.
10/3/2022
the money game
the money game
Kim Kardashian Just Paid a $1 Million Fine for Being a Crypto Grifter
By Jen Wieczner
It turns out that crypto influencing is not the same as influencing for skin-care products or makeup or bras.
10/3/2022
the money game
the money game
Why Is Everyone Freaking Out About Credit Suisse?
By Kevin T. Dugan
Wall Street is suddenly fearful about a Lehman Brothers–like disaster hitting the financial system — sparked by the European investment bank.
10/3/2022
the national interest
the national interest
Republican Senator on Trump’s Racist Rant: ‘I Hope No One Is Racist’
By Jonathan Chait
Unfortunately, Donald Trump is extremely racist.
10/3/2022
early and often
early and often
Trump Demanded a Government Shutdown and Nobody Noticed
By Ed Kilgore
His incendiary jab at Mitch McConnell distracted from a complaint about congressional Republicans not opting to destroy their midterm chances.
10/3/2022
war in ukraine
war in ukraine
Russia Doesn’t Exactly Know What Territory It Stole From Ukraine
By Matt Stieb
The Kremlin is still figuring out the borders of its newly annexed territory in eastern Ukraine, where Russian soldiers are getting pummeled.
10/3/2022
tremendous content
tremendous content
Bonkers Revelations From Maggie Haberman’s Trump Book, Ranked
By Margaret Hartmann
If you want more information on Trump being weird with toilets and belittling Jared Kushner, Confidence Man has you covered.
10/3/2022
just asking questions
just asking questions
How There Will Be Blood Explains the Crumbling Global Economy
By Kevin T. Dugan
Think inflation is bad here? Brent Johnson predicted the global financial crisis we’re in, and he thinks it’s going to get much worse.
10/3/2022
the city politic
the city politic
The Horror That Continues to Haunt Our City
By Errol Louis
Treating New Yorkers with serious mental illness is one of the only ways we can prevent tragedies like the murder of FDNY Lt. Alison Russo-Elling.
10/3/2022
crime
crime
Collision Course
By Lauren Smiley
The car wrecks were staged. The injuries were real. Led by a charismatic rogue, one family bloodied itself to pocket $6 million.
10/3/2022
on with kara swisher
on with kara swisher
So … Should We Ban TikTok or What?
By Intelligencer Staff
Kara Swisher grills TikTok COO Vanessa Pappas about the concerns China’s government has influence over the app and access to its user data.
10/2/2022
what we know
what we know
Hurricane Ian’s Death Toll Continues to Climb
By Intelligencer Staff
Rescue efforts are still underway in Florida, where inland flooding continues to hamper recovery efforts.
10/2/2022

Indonesia: At least 125 dead in football stadium crush
—BBC
10/2/2022
poll position
poll position
Why Are Pollsters Disagreeing About the 2022 Midterms?
By Ed Kilgore
If one influential Republican-leaning pollster is right, Patty Murray and Josh Shapiro should be worried. Others scoff at the idea.
10/1/2022
just asking questions
just asking questions
The Surge That Could Save Democrats
By Nia Prater
Tom Bonier makes the case that women are registering to vote in a fury after Dobbs and have the potential to reshape the midterms.
9/30/2022
2022 midterms
2022 midterms
Midterm Candidates’ Skeletons Are Coming Out of the Closet
By Ed Kilgore
In close races, attacks based on “oppo research” can matter a lot at this stage of the campaign cycle.
9/30/2022
foreign interests
foreign interests
Putin Decries U.S. ‘Satanism’ in Bizarre Speech Annexing Parts of Ukraine
By Matt Stieb
His speech celebrating an illegal annexation in Ukraine turned into an anti-trans rant in which he blamed the West for blowing up Nord Stream.
9/30/2022
court appearances
court appearances
Elon’s Bad Week: Embarrassing Text Messages and Reports of Settlement Talks
By Kevin T. Dugan
After the worst stretch yet in his quest to not buy Twitter, the end may be near.
9/30/2022
politics
politics
New Yorkers Could Get Paid to Report Illegal Parking
By Nia Prater
A proposed bill in City Council would allow people to report instances of illegal parking and receive a cut of the fine.
9/30/2022
2022 midterms
2022 midterms
The Election Deniers Running to Control the 2024 Race
By Ed Kilgore
Secretary of state candidates who don’t accept Biden’s win are looking to take over the election machinery in several key battlegrounds this November.
9/30/2022
early and often
early and often
Left-Wing Challengers Have a Hard Road Ahead
By Ross Barkan
After shock victories in 2018 and 2020, progressive challengers are having a harder time pulling off AOC-like upsets.