The Commonwealth Fund has a new survey showing that the proportion of adults lacking health insurance has fallen by a quarter, from 20 percent of the population to 15 percent. (Most respondents, including 74 percent of newly insured Republicans, report liking their plan.) Also, this week, the Congressional Budget Office again revised down its cost estimates for Medicare, which now spends $50 billion a year less than it was projected to before Obamacare passed. Also, the New England Journal of Medicine recently estimated that 20 million Americans gained insurance under the new law.

The latter study comes in for criticism by Peter Suderman, Reason’s indefatigable health-care analyst. Like the entire right-wing media, Suderman’s coverage of Obamacare has furnished an endless supply of mockery of the law’s endless failures and imminent collapse. While some of his points have validity, it’s fair to say that the broader narrative conveyed by his work, which certainly lies on the sophisticated end of the anti-Obamacare industry, has utterly failed to prepare his libertarian readers for the possibility that the hated health-care law will actually work more or less as intended.

And yet, in another way, the conservative media has provided a useful lagging indicator of Obamacare’s progress. The message of every individual story is that the law is failing, the administration is lying, and so on. The substance, when viewed as a whole, tells a different story. Here is how Suderman, to take just one example, has described the continuous advancement of the law’s coverage goals:

January 21: The prognosis was so grim that Obamacare might not have yielded any net reduction in the uninsured (“it appears possible that there has been no net expansion of private coverage at all”).

February 24: It appeared that non-trivial numbers of Americans, perhaps a couple million, had gained insurance, but far less than the claimed 7 million:

We don’t know how exactly many people have gotten health coverage through Medicaid for the first time as a result of Obamacare, but the actual number is certainly much lower than the 7 million President Obama claimed …

That means a significant downward revision is coming — a 20 to 30 percent reduction would bring total enrollments down to between 2.31 million and 2.64 million.

March 11: The number of newly covered had risen from the mid-2 millions to around 3 million — far less than the 13 million claimed by Obama:

instead of the 13 million people the administration the administration counts as having obtained coverage under the law, the total gain in coverage for the previously is really more like 3 million, most of which comes through the dysfunctional Medicaid system. If so, that’s not nothing, but it’s a lot less than most anyone who supported the law predicted or hoped.

July 8: A New England Journal of Medicine report that 20 million Americans have gained insurance under Obamacare, argues Suderman, is probably too high (“it’s too early to say exactly how many so far — only that 20 million is almost certainly an overstatement”).

We have gone from learning that the law has failed to cover anybody to learning it would cover a couple million to learning it would cover a few million to learning that it has probably insured fewer than 20 million people halfway through year one. The message of every individual dispatch is a confident prediction of the hated enemy’s demise, yet the terms described in each, taken together, tell the story of retreat. The enemy’s invasion fleet has been destroyed; its huge losses on the field of battle have left it on the brink of surrender; the enemy soldiers will be slaughtered by our brave civilian defenders as they attempt to enter the capital; the resistance will triumph!

Update: Gallup’s latest survey shows yet another steep drop in the uninsured rate: 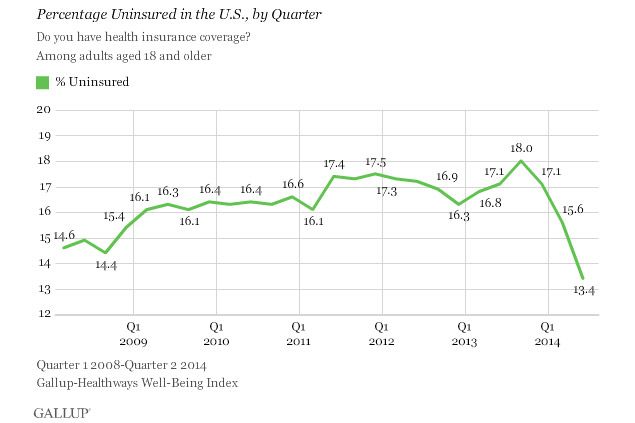 Jonathan Cohn and Larry Levitt round up more evidence, which varies, but all points toward the conclusion that Obamacare has effected a significant drop in the uninsured rate on the approximate scale projected all along. You can fairly nitpick any particular measure at any given time (as Suderman and others on the right have done). But if you’re doing so in the service of an argument that Obamacare is failing in its goal of expanding you’re coverage, even if your narrow nitpicking is correct, you have misled your readers on the basic point.

THE FEED
5 mins ago
early and often
early and often
The GOP Can’t Remember Why It Took the Debt Ceiling Hostage
By Eric Levitz
Republicans are fighting Biden for the sake of fighting.
2/1/2023
politics
politics
Eric Adams’s Approval Rating Is Falling
By Nia Prater
Crime is the top issue for New Yorkers, and very few say it’s gotten better under his watch.
2/1/2023
early and often
early and often
Nikki Haley Is Taking on Trump 2024 (or Running for VP)
By Ed Kilgore
The South Carolinian is expected to announce her run later this month, but Trump has already staked a claim on her crucial home state.

2/1/2023
creature capers
creature capers
The Hunt Is on to Find the Dallas Zoo Bandit
By Matt Stieb
Police are looking for whoever is responsible in a strange crime wave in which animals have been killed and apparently stolen from the zoo.
2/1/2023
tremendous content
tremendous content
Watch Trump Repeatedly Plead the Fifth, Like a Mobster
By Margaret Hartmann
New deposition video shows Trump, who once said only criminals and “the mob” take the Fifth, asserting his constitutional right more than 400 times.
2/1/2023
politics
politics
There’s Another Push to Change New York’s Bail Reforms
By Nia Prater
Governor Kathy Hochul reaffirmed her intent to give judges more discretion in setting bail during her budget presentation Wednesday.
2/1/2023
the national interest
the national interest
The GOP Attack on Ilhan Omar Trivializes Antisemitism
By Jonathan Chait
Elevating Marjorie Taylor Greene exposes the hypocrisy.
2/1/2023
early and often
early and often
The Latest Hunter Biden Revelation Is a New Low
By Matt Stieb
Texts reportedly show he withheld an employee’s pay for sex.
2/1/2023
let it snow
let it snow
Our Long Local Snowmare Is Over
By Benjamin Hart
New York City finally saw some flakes stick to the ground on Wednesday morning. Better late than never.
2/1/2023
the big picture
the big picture
The End of ‘Zombie Neoliberalism’?
By Eric Levitz
There is burgeoning, bipartisan support for big government.
2/1/2023
the national interest
the national interest
It’s Republicans Who Won’t Negotiate Over the Budget Deficit
By Jonathan Chait
The other big lie in this hostage crisis is hiding in plain sight.
2/1/2023
the system
the system
The Government’s Telling Response to Tyre Nichols’s Death
By Zak Cheney-Rice
The reforms being considered would probably not have prevented his killing. But officials have gotten better at preempting outrage.
1/31/2023
the talented mr. santos
the talented mr. santos
Here’s Every Single Lie Told by George Santos
By Matt Stieb
Navigating the many exaggerations and falsehoods of New York’s newest representative.
1/31/2023
life after roe
life after roe
RNC Tells Republican Politicians to Stay Extreme on Abortion
By Ed Kilgore
The RNC passed a resolution scolding politicians who backed off after the end of Roe v. Wade and urging them to stay on the offensive in 2024.
1/31/2023
tyre nichols
tyre nichols
Eric Adams Defends Specialized Police Units Following Tyre Nichols Case
By Nia Prater
The New York mayor said that, while he did not want to second-guess the decision to disband Memphis’s SCORPION unit, “units don’t create abuse.”
1/31/2023
the money game
the money game
Jerome Powell’s Crazy Balancing Act
By Kyla Scanlon
The Fed chairman faces a big decision with the world watching. No one said his job would be easy.
1/31/2023
the national interest
the national interest
Why DeSantis Is on Track to Beat Trump
By Jonathan Chait
The main Trump alternative has learned the lessons of 2016.
1/31/2023
what we know
what we know
A Seventh Officer Has Been Suspended After Tyre Nichols’s Death: Updates
By Intelligencer Staff
The officer was relieved of duty the same day the five officers charged with murder were fired for the beating.
1/31/2023
games
games
The Lost Joy of Hating Sports Announcers
By Will Leitch
Self-righteous jerks like Billy Packer don’t exist on TV anymore, and that’s a shame.
1/31/2023
lost in translation
lost in translation
The Spy Who Wasn’t
By Paula Aceves
Baimadajie Angwang wanted a visa for his daughter. He got charged with being an “insider threat” instead.
1/30/2023
royals
royals
King Charles Is Ready to Trash Harry — or Declare a Truce
By Margaret Hartmann
Or Prince Harry is right about the U.K. press relentlessly peddling utter nonsense.
1/30/2023
politics
politics
Manhattan DA Moves Closer to Charging Trump Over Stormy Daniels Hush Money
By Nia Prater
Prosecutors have begun to present evidence to a Manhattan grand jury from their inquiry into hush payments made to Stormy Daniels on behalf of Trump.
1/30/2023
on with kara swisher
on with kara swisher
Kara Swisher on Mark Zuckerberg’s Never-ending Trump Problem
By Intelligencer Staff
She reflects on more than 15 years of covering Facebook and why bringing back Trump is a lose-lose.
1/30/2023
ftx fallout
ftx fallout
The FTX Investigations Are Getting Messy
By Matt Stieb
Prosecutors say SBF may have engaged in witness tampering. Meanwhile, Caroline Ellison and others aren’t cooperating in the bankruptcy case.
1/30/2023
early and often
early and often
Trump Won’t Go Away Unless a Republican Actually Beats Him
By Ed Kilgore
The 2024 invisible primary is well underway, and Donald Trump is winning it, wishful thinking aside.