Well, that didn’t take long at all: The wreckage from downed Malaysia Airlines Flight 17 in Ukraine hadn’t even stopped smoking when Russian-language news sources began explaining what really happened in the skies over Donetsk. And what really happened?

Someone, the theory goes, tried to take down Vladimir Putin’s plane, but missed.

Or at least it was so according to Interfax, a Moscow-based news agency. It cited an anonymous source, purportedly from the federal agency Rosaviation, saying that Putin’s plane crossed MH17’s path near Warsaw, less than an hour apart. From a distance, the two airliners are of a similar size and coloring, as seen below in a handy graphic from Russian propaganda channel RT. 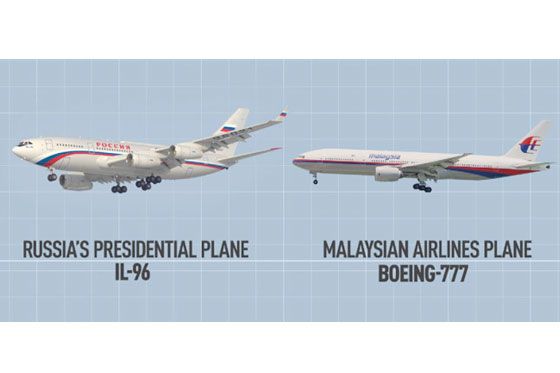 According to the Russian-language edition of Forbes, the article was available only on an Interfax subscription feed.

Like any good conspiracy theory, the news quickly spread through news agencies and social media. In a Russian news broadcast uploaded to YouTube, an anchor quoted the anonymous source’s description of the events and repeatedly asserted that the Russian president’s plane was nearby as footage of the wreckage played on the screen. Forbes reported that Rosaviation head Alexander Neradko would not comment on the flight path of the president’s plane, while other respected news organizations reprinted the story. Twitter, naturally, lit up with accusations about what had really happened.

Of course, it hardly matters that none of it appears to be true.

Named sources haven’t commented on the “Putin’s plane as target” allegations, and everyone — Kiev, pro-Russian rebels, and Russia itself — is refusing to take responsibility for the incident. But in a statement Thursday night, Putin took the knife sticking out of Ukraine and twisted it a little deeper, saying, “this tragedy would not have occurred if there was peace on this earth, or, in any case, if there hadn’t been renewed military actions [against pro-Russian rebels] in Southeastern Ukraine.” Because that’s what you do when 295 people die.

It seems the only thing everyone can agree on is that the plane was brought down by a SA-17 Grizzly, a Buk antiaircraft missile. But the discord and misinformation is not surprising — if you can’t agree on borders that had been set for upwards of 20 years, how can you agree on anything else?