Karl Rove has a column today promising Republicans that they can still win by running against Obamacare. And when Rove tells Republicans they’ve got a winning hand, you should listen, because he would never wildly overstate his party’s prospects. Except that one time in 2000 he predicted George W. Bush would win 320 electoral votes. And that time in 2006 when he insisted Republicans would definitely hold both houses of Congress. And that other time in 2000 when he assured reporters that Bush would win the New Hampshire primary. And of course that time in 2012 when he refused to accept the outcome of Fox News’ own election desk.

Rove is correct that public disapproval of Obamacare has consistently exceeded approval. The trouble for Republicans is that their party hasn’t managed to keep the debate solely focused on the question of “is this law good or bad?” Repealing Obamacare is less popular than keeping it. And the Democratic position of building on the existing law polls far ahead of the Republian position of scrapping it and starting over. Different polls phrase variations of this question differently and yield differing results, but this Kaiser version is fairly typical: 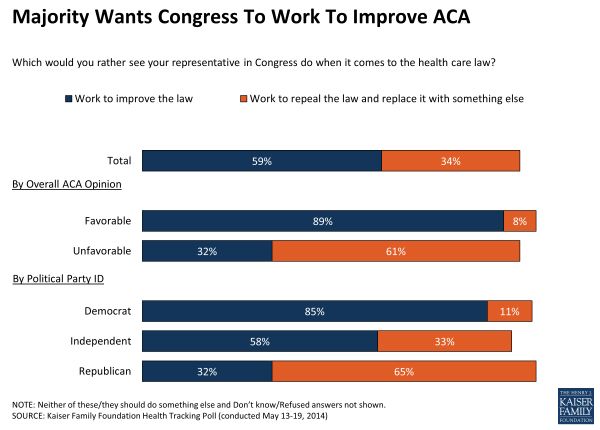 Likewise, another recent poll shows that even voters in competitive red states this year would rather work to improve Obamacare than replace it with something else. Democrats may have the liability of defending the status quo, but Republicans have the liability of lacking a plausible alternative. Thus, the most recent Pew poll shows that voters trust Democrats over Republicans to handle health care, 45 percent  to 40. This would seem to at least complicate Rove’s giddy advice that Republicans are as strong as ever on the issue.

Rove’s column goes on, and on, and on about the horrible things he imagines Obamacare has done to America. Finally, we arrive at these two paragraphs:

Putting ObamaCare in the center of their campaigns will also force GOP candidates to spell out what they would do instead of ObamaCare. Americans do not want to return to the broken status quo in place before Mr. Obama made an even bigger mess of our health-care system.

ObamaCare was unpopular when it passed. Republican candidates must show through real-life examples why those concerns were fully justified, and how millions of lives have been unnecessarily disrupted by this liberal calamity.

Republicans need to spell out what we would do instea — oh, look, I’ve run out of space.

THE FEED
10/15/2021
politics
politics
British Lawmaker Stabbed to Death During Meeting With Constituents
By Nia Prater
The gruesome attack has been declared a terrorist incident.
10/15/2021
unsolved mysteries
unsolved mysteries
Does Trump Want Me to Think He’s Into Golden Showers?
By Margaret Hartmann
I do not want to believe the pee-tape story, so I would appreciate it if Trump would stop offering suspicious denials no one asked for.
10/15/2021
education
education
Will Ending Gifted and Talented Programs Help Desegregate Schools?
By James D. Walsh
Even parents and advocates of the programs acknowledge how much they have disadvantaged Black and brown students.

10/15/2021
assessment
assessment
Can Eric Adams Really Turn 25,000 Hotel Rooms Into Affordable Housing?
By Kevin T. Dugan
Even after all the past year’s closures, that’s a lot of real estate.
10/15/2021
tourism
tourism
Fully Vaccinated Travelers Can Visit U.S. Starting November 8
By Paola Rosa-Aquino and Chas Danner
The U.S. will soon allow fully vaccinated visitors from more than 30 countries, including via the borders with Canada and Mexico.
10/15/2021

U.S. to ease Covid travel entry rules, require vaccinations for foreign visitors on Nov. 8
—NBC News
10/15/2021
the national interest
the national interest
5 Theories on What Kyrsten Sinema Wants
By Jonathan Chait
Is she just the Glenn Greenwald of senators?
10/15/2021
just checking in
just checking in
So What Are Trump’s Cabinet Members Up to These Days?
By Margaret Hartmann
Ben Carson is starting his own Boy Scouts, Mike Pompeo is denying he plotted to kill Assange, and Wilbur Ross is dreaming of Trump condos on the moon.
10/14/2021
virginia gubernatorial election
virginia gubernatorial election
Youngkin Dances Around Insurrection Flag Rally Held to Promote His Candidacy
By Ed Kilgore
Bannon and Trump showing up to honor January 6 and Youngkin’s candidacy is not what the candidate needs to charm swing voters.
10/14/2021
the city politic
the city politic
De Blasio Could Have a Great Final Act — Under One Condition
By Errol Louis
The mayor can’t let his gubernatorial dreams prevent him from making tough political decisions.
10/14/2021
hurricane ida
hurricane ida
New York Doesn’t Need Its Own Forecast. It Needs a Forecast Communicator.
By Alissa Walker
“It’s very clear that the blatant breakdown of communication is what needs to be adjusted.”
10/14/2021
media
media
Nicholas Kristof to Attempt Rare Columnist-to-Politician Pivot
By Benjamin Hart
The longtime New York Times columnist is really doing it; he quit the paper as he gears up to run for governor of Oregon.
10/14/2021
organized labor
organized labor
Welcome to Striketober
By Sarah Jones
What’s really behind the wave of national strikes at John Deere, Kellogg’s, and more.
10/14/2021
intelligencer chats
intelligencer chats
How Government Could Make the Inflation Problem Worse
By Benjamin Hart and Eric Levitz
With politically damaging price increases showing no signs of easing, it may be tempting to take counterproductive measures.
10/14/2021
politics
politics
Women and Trans Inmates to Be Transferred Out of Rikers
By Nia Prater
This move comes as state and local officials are trying to grapple with the crisis at Rikers that has resulted in multiple inmate deaths this year.
10/14/2021
january 6
january 6
Trump Doesn’t Care How Ashli Babbitt Died
By Zak Cheney-Rice
The grim reality behind the ex-president’s “happy birthday” message to the slain Capitol rioter.
10/14/2021
economy
economy
Neoliberalism Died of COVID. Long Live Neoliberalism!
By Eric Levitz
How the predominant ideology of our time survived the pandemic.
10/13/2021
big lie
big lie
Trump Says Republicans Must Solve the Big Lie or Their Voters Won’t Vote
By Ed Kilgore
It’s unclear how Trump’s phony fraud incidents can be solved by a party that opposes federal election legislation. But it keeps the focus on himself.
10/13/2021
politics
politics
Democratic Losses in 2022 Won’t Doom Biden’s Reelection
By Ed Kilgore
Clinton and Obama bounced back after their party’s poor midterm performances, and Biden will have the benefit of incumbency in 2024.
10/13/2021
covid-19
covid-19
FDA Sees Promise in J&J Booster But Finds Issues in Data
By Nia Prater
The agency couldn’t independently verify the company’s data and noted that one study’s result might have been due to a test’s low sensitivity.
10/13/2021
politics
politics
Why Republicans May Go All In on Parental Rights
By Ed Kilgore
Virginia gubernatorial candidate Glenn Youngkin thinks defending parents’ rights to dictate what happens in schools appeals to swing and base voters.
10/13/2021
republicans
republicans
Mark Robinson Exposes the GOP’s Problem With Its Base
By Ed Kilgore
The North Carolina lieutenant governor’s extreme culture-war positions may excite the MAGA faithful, but they’re broadly unpopular.
10/13/2021
explainer
explainer
The Havana Syndrome Mystery and How the U.S. Plans to Solve It
By Matt Stieb
State officials have complained about not being taken seriously, as a declassified report says the symptoms weren’t caused by microwave weapons.
10/13/2021
transit
transit
Farewell (for Now) to the Absurd La Guardia AirTrain
By Benjamin Hart
Andrew Cuomo’s dream of shepherding riders the wrong way to the airport is on likely permanent hold.
10/13/2021
immigration
immigration
Life Under ‘Extreme Hardship’
By Deborah Chasman
Inside one family’s decade-long ordeal with America’s cruelly absurd immigration laws.
10/12/2021
politics
politics
Democrats Should Save Some Reconciliation Goodies for 2022
By Ed Kilgore
The best way to reduce the Build Back Better price tag without sacrificing initiatives is to delay the most popular ideas, like Medicare expansion.