For as long as anyone can remember, New York has been a taxi town. The image of the bright yellow cab (or more recently, the pistachio-green outer-borough taxi) has been intimately linked with the city’s image and self-conception, since long before the current wave of digital-age competitors cropped up.

That will change soon if Uber has its way. The car-hailing app is slashing its prices in New York City in an attempt to undercut the taxi market and win over taxi loyalists. Now, for the first time, rides on UberX — the low-end version of Uber — will cost less than those in a yellow cab.

Uber announced today that it is cutting UberX prices by 20 percent for “a limited time” in New York. These fares will undercut both the old UberX prices and the price of a traditional taxi — saving you $2, for example, on a trip from Grand Central to the Financial District. The company isn’t saying how long the new price regime will last, but similar trial periods have gone on for months in other cities. Here’s the new comparison chart provided by Uber: 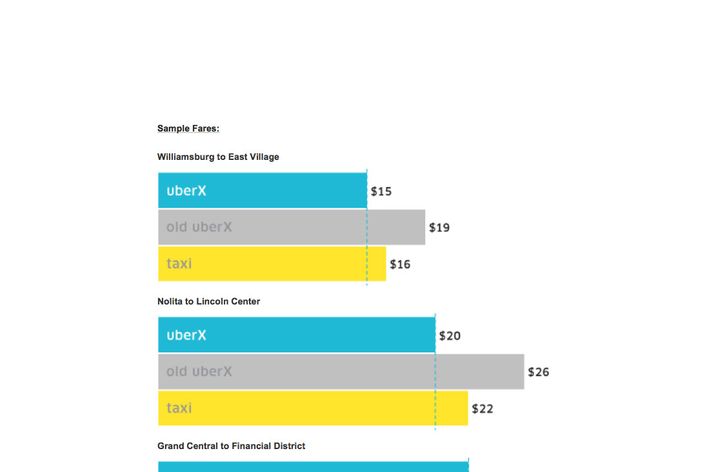 Uber has been using its recent $1.2 billion round of funding to conduct these kinds of price wars all across the country — in San Francisco, for instance, it’s now 45 percent cheaper to take an UberX than a cab. The company’s goal is simple: Make the service as attractive to newcomers as possible while elbowing rivals like Lyft and Hailo out of the market.

That aggressive strategy will sit well with customers, who will get cheap, subsidized trips around town. Uber drivers may not be as happy, since their earnings are linked to how much passengers pay. (Uber claims that drivers make up for lower per-trip earnings by getting more trips per hour.) In some cities, Uber has been attempting to keep drivers happy by paying them the old rate even while charging passengers the new, lower rate — effectively taking a loss every time a passenger steps into an UberX vehicle.

That’s not happening in New York, according to Uber’s New York general manager Josh Mohrer, who said that city drivers will still make their 80 percent cut of the new, reduced fares. But it’s clear that Uber doesn’t just want to coexist with the yellow taxi market. With its billion-dollar war chest, it’s coming straight for every medallion owner in town.

THE FEED
6 mins ago
games
games
The Lost Joy of Hating Sports Announcers
By Will Leitch
Self-righteous jerks like Billy Packer don’t exist on TV anymore, and that’s a shame.
8:00 a.m.
lost in translation
lost in translation
The Spy Who Wasn’t
By Paula Aceves
Baimadajie Angwang wanted a visa for his daughter. He got charged with being an “insider threat” instead.
1/30/2023
royals
royals
King Charles Is Ready to Trash Harry — or Declare a Truce
By Margaret Hartmann
Or Prince Harry is right about the U.K. press relentlessly peddling utter nonsense.

1/30/2023
tyre nichols
tyre nichols
A Sixth Officer Has Been Suspended After Tyre Nichols’s Death: Updates
By Intelligencer Staff
The officer was relieved of duty the same day the five officers charged with murder were fired for the beating.
1/30/2023
politics
politics
Manhattan DA Moves Closer to Charging Trump Over Stormy Daniels Hush Money
By Nia Prater
Prosecutors have begun to present evidence to a Manhattan grand jury from their inquiry into hush payments made to Stormy Daniels on behalf of Trump.
1/30/2023
on with kara swisher
on with kara swisher
Kara Swisher on Mark Zuckerberg’s Never-ending Trump Problem
By Intelligencer Staff
She reflects on more than 15 years of covering Facebook and why bringing back Trump is a lose-lose.
1/30/2023
ftx fallout
ftx fallout
The FTX Investigations Are Getting Messy
By Matt Stieb
Prosecutors say SBF may have engaged in witness tampering. Meanwhile, Caroline Ellison and others aren’t cooperating in the bankruptcy case.
1/30/2023
early and often
early and often
Trump Won’t Go Away Unless a Republican Actually Beats Him
By Ed Kilgore
The 2024 invisible primary is well underway, and Donald Trump is winning it, wishful thinking aside.
1/30/2023
sports
sports
The Empire State Building Should Stop Doing This
By Benjamin Hart
Commemorating a sports rival’s victory is uncouth and unnecessary.
1/30/2023
politics
politics
Tyre Nichols’s Parents Will Attend Biden’s State of the Union
By Nia Prater
The Congressional Black Caucus extended the invitation.
1/30/2023
screen time
screen time
Why Does It Feel Like Amazon Is Making Itself Worse?
By John Herrman
The “everything store” has gotten junkier and more chaotic. But, for the company, it’s only good business.
1/30/2023
the inside game
the inside game
Joe Biden’s Big Lesson From the Last Debt-Ceiling Fight
By Gabriel Debenedetti
And why this time is totally different from 2011. Hopefully.
1/29/2023
early and often
early and often
Trump’s First 2024 Pitch: It’s Me or World War III
By Chas Danner
The former president had some things to say at his first two official campaign events over the weekend.
1/29/2023
talking about the weather
talking about the weather
This Is a Snow Lover’s Nightmare
By Benjamin Hart
New York has broken a snowless record — and there’s no end in sight to this gray misery.
1/29/2023
2024 vision
2024 vision
2024 Looks Very Dark for Senate Democrats
By Ed Kilgore
Or why the party really, really needs Joe Manchin.
1/28/2023
the system
the system
Tyre Nichols and the End of Police Reform
By Zak Cheney-Rice
His death is evidence that cosmetic change can’t excise the rot of American law enforcement.
1/28/2023
fear vs. fun
fear vs. fun
Phone, Keys, Wallet, Test Strip
By Kyra Breslin
Checking for fentanyl is becoming a necessary ritual of nightlife.
1/27/2023
early and often
early and often
Republicans Want Surrender, Not a Deal, on the Debt Ceiling
By Ed Kilgore
There can be no “bipartisan” solution to the debt-ceiling crisis when one party refuses to talk about the revenue side of the ledger.
1/27/2023
the talented mr. santos
the talented mr. santos
George Santos Commemorates Holocaust After Lying About It
By Nia Prater
The U.S. representative, who doesn’t actually have Jewish heritage but may have made antisemitic remarks, gave a speech on Holocaust Remembrance Day.
1/27/2023
early and often
early and often
McDaniel Hangs Onto RNC Gavel Despite DeSantis Defection
By Ed Kilgore
Harmeet Dhillon threw a scare into the chair of the RNC, but even late support from DeSantis didn’t convince party voters away from backing McDaniel.
1/27/2023
early and often
early and often
Judge Orders Release of Video Showing Attack on Paul Pelosi
By Matt Stieb
The body-cam footage of the responding officer shows Pelosi and assailant David DePape struggling over a hammer before the assault.
1/27/2023
early and often
early and often
Republicans Are Already Burying Their Kooky National Sales-Tax Plan
By Ed Kilgore
McCarthy promised a floor vote on the Fair Tax, which would create a 30 percent national sales tax and abolish the IRS. Now, it may die in committee.
1/27/2023
the talented mr. santos
the talented mr. santos
Here’s Every Single Lie Told by George Santos
By Matt Stieb
Navigating the many exaggerations and falsehoods of New York’s newest representative.
1/27/2023
the national interest
the national interest
The Durham Probe Was Barr’s Witch Hunt
By Jonathan Chait
A shockingly unethical crusade to vindicate Trump.
1/27/2023
just asking questions
just asking questions
How an 18-Year-Old Got His Crossword Puzzle Into the Sunday Times
By Benjamin Hart
High-school senior Garrett Chalfin on winning over the editors — and the jocks at summer camp — with wordplay.