After promising to name the officer responsible for the fatal shooting of 18-year-old Michael Brown by noon on Tuesday, the Ferguson Police Department has declined to do so, citing security concerns. “The value of releasing the name is far outweighed by the risk of harm to the officer and his family,” said police chief Thomas Jackson, referring to threats made online, according to the New York Times.

Protests carried on through the day following clashes with police over two straight nights. This evening, the FAA agreed to enforce a no-fly zone through next Monday over Ferguson for aircraft under 3,000 feet. The reason provided was “to provide a safe environment for law-enforcement activities.”

Local police said one of their helicopters “came under fire Sunday night,” Mashable’s Brian Ries reports, and that the ban applies to media. The FAA declined to comment. 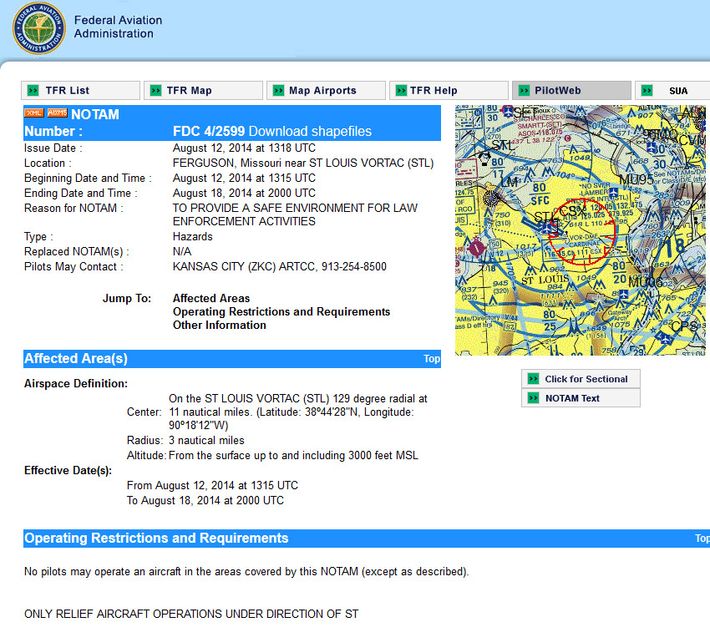 Meanwhile, President Obama has issued a statement on Brown’s death, calling it “heartbreaking” and sending “deepest condolences to his family and his community at this difficult time.”

The president noted the Justice Department investigation and advocated for cool heads. “I know the events of the past few days have prompted strong passions, but as details unfold, I urge everyone in Ferguson, Missouri, and across the country, to remember this young man through reflection and understanding. We should comfort each other and talk with one another in a way that heals, not in a way that wounds,” he continued in that Obama way. “Along with our prayers, that’s what Michael and his family, and our broader American community, deserve.”