The political subculture of anti-Obama leftists has entered a phase by this point in the Obama presidency where the truth of its worldview is so well-established to its own adherents that it requires no exposition. Tom Frank, an anti-Obama leftist, interviews Cornel West, another anti-Obama leftist, in a conversation so deeply marinated in shared assumptions that, at one point, both interviewer and interviewee agree that nobody disagrees with them. Frank asks West, “Is there anybody who thinks he’s progressive enough today? West replies, “Nobody I know. Not even among the progressive liberals.” What about maybe the 61 million people who voted for Mitt Romney? Some of them may even think Obama is too progressive.

West and Frank are certainly correct about one thing: Obama does not fully subscribe to their point of view, and he never has. When he ran as a pragmatist who understood the value of the market, Obama was not lying. A world where Cornel West could govern without any constraints would look very different from a world where Obama could govern without constraints. In that one sense, the left’s mistrust of Obama has a fully rational basis.

Paul Ryan’s List of 6 Favorite Books Has One Huge Omission
Rand Paul Offers Free Eye Exam With Deportation
Obamans, Selling Out, and the Proxy Fight for the Democratic Party’s Future

But West, and much of the American left, doesn’t merely believe that. It also believes that a world where Obama can govern without constraints is the actual world we live in, or, at least, a reasonable approximation thereof. More inspiring speeches, harder fighting, or some other unspecified application of willpower is all it would take to have forced Olympia Snowe to vote for a larger stimulus or Scott Brown to go along with tougher financial regulation. Because they cannot conceive of any limits to Obama’s power, betrayal and haplessness are the only causes they can imagine for their distress. (West: “What I hear is that, ’[Obama] pimped us.’ I heard that a zillion times. ‘He pimped us, brother West.’”)

The field of political science, with its firm grasp of multiple veto points, the limits of rhetoric, and other structural realities of the federal government, is an alien field to the anti-Obama left. Its chosen field is history. (Michael Kazin’s anti-Obama polemic in the New Republic likewise stays away from political science and lashes Obama with historical counterexamples.) Their version of history offers hackneyed, romanticized tales rather than the real thing.

You have to be able to speak to those divisions in such a way that, like FDR, like Lincoln, you’re able to somehow pull out the best of who we are, given the divisions. You don’t try to act as if we have no divisions and we’re just an American family …What is history going to say about you? Counterfeit! That’s what they’ll say, counterfeit. Not the real thing.

[Frank: That’s exactly what everyone was saying at the time.]

That’s right. That’s true. It was like, “We finally got somebody who can help us turn the corner.” And he posed as if he was a kind of Lincoln.

So the Lincoln of West’s imagination is a figure who would never “act as if we have no divisions and we’re just an American family.” This is the same Lincoln who, in his inaugural address — delivered after seven states had already seceded from the Union — declared, “We are not enemies, but friends. We must not be enemies. Though passion may have strained, it must not break our bonds of affection.”

In fact, the real Lincoln was a carefully calculating politician, always careful not to step too far ahead of public opinion. Progressives distrusted and even loathed Lincoln with an intensity that exceeds West’s own distrust of Obama. Here, from James McPherson’s Battle Cry of Freedom, is a brief summary of the disappointed left circa 1862: 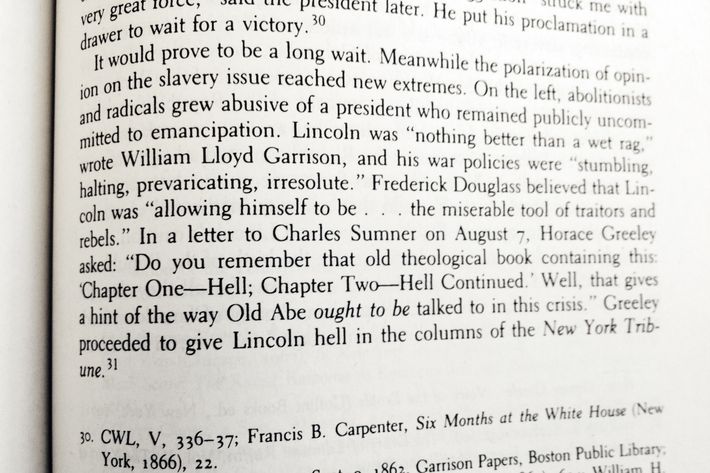 West further believes that only blind racial loyalty can explain the refusal of black liberals like Al Sharpton to agree with him. “[Sharpton] can’t stand what I do because, for him, it’s an act of racial traitorship to be critical of the president,” complains West. West is appalled by accusations of race traitorship unless he is the one making them:

Cornel West tore into Obama and Sharpton for sanitizing King’s vision of economic and racial equality. “Brother Martin himself, I think, would’ve been turning over in his grave,” West told an interviewer at the time, adding: “We saw the coronation of the bona fide house negro of the Barack Obama plantation, our dear brother Al Sharpton.”

THE FEED
24 mins ago
what we know
what we know
U.S. Shoots Down China’s Balloon: Updates
By Chas Danner
“We’re gonna take care of it” President Biden told reporters earlier Saturday.
9:00 a.m.
early and often
early and often
The Democrat Who Could Take Down Kyrsten Sinema
By Ben Jacobs
Ruben Gallego will try to fulfill the left’s dreams by challenging Arizona’s newly independent U.S. senator.
2/3/2023
early and often
early and often
House Republicans’ Assault-Weapon Pins Aren’t Just a Taunt
By Ed Kilgore
Owning the libs may be an added bonus, but Second Amendment absolutists clearly intend them as a threat against those who challenge gun rights.