It’s hard to say what the 2014 midterms are about. Voters are not focused on any single issue. The two parties are not gearing up for a major political fight with one another, or running on any banner piece of law. As such, 2014 has managed to earn a nickname from the political press: the “Seinfeld Election,” an election about nothing.

The Washington Post did a good story interviewing voters and providing anecdotes to demonstrate the trend:

Ask voters in North Carolina’s Research Triangle what November’s midterm elections are about and one will tell you drones. A second will say closing the prison at Guantanamo Bay, Cuba. Yet another, the middle-class squeeze. At a Sunday school classroom in Ypsilanti, Mich., voters are concerned about deteriorating roads, teen sex parties, truancy in schools and violent crime. Six hundred miles west at a Republican campaign office in Urbandale, Iowa, people fear that America is on an irreversible decline — like Germany after World War I, as one man predicted.

It’s easy enough to see in polls, too. Ask Americans what they’re concerned about, and the answer is “everything.” This is from a recent Gallup survey: 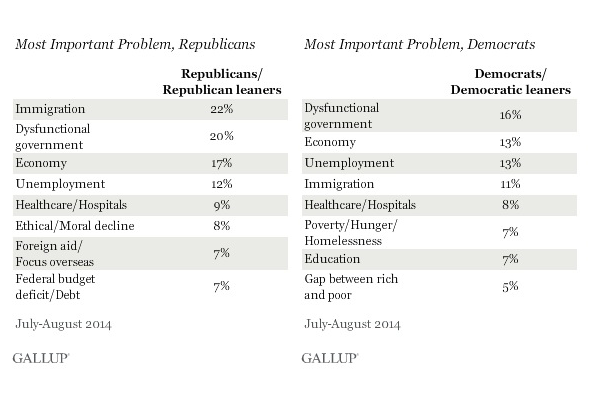 It’s not that voters are on high alert about a number of concerns, either. They are caring about more things, and caring less overall. This summer, a CNN/Opinion Research poll asked Americans to look at a list of issues — the economy, taxes, gun policy, and so on — and to label them as “extremely important,” “very important,” moderately important,” and “not that important.” For the first time in years, not a single issue was seen as “extremely important” by a majority of respondents.

So what accounts for this Seinfeldian election year?

The recovery seems to explain a big chunk of it. From 2008 through 2012, the country’s economic troubles were all-consuming. There was the financial crisis, the recession, the debt standoff, the fiscal cliff, and so on. But the economy has kept chugging along, and the relative quiet has given voters space to contemplate other priorities.

You can see the trend in this Gallup chart. The proportion of Americans citing economic issues — “the economy in general,” “unemployment,” “budget deficits,” “inequality,” etc. — as the most important challenge facing the country has fallen to 38 percent from a high of 86 percent in 2009. 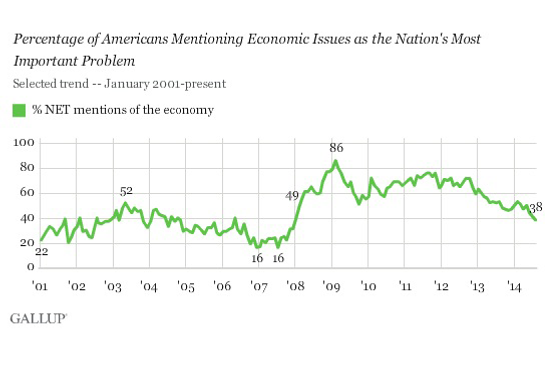 The deep freeze in Washington also seems instrumental. This Congress has failed to pass any major new legislation, and has even struggled with habitual bills necessary just to keep lights on. As such, candidates are not running on any major legislative achievements or making any major legislative promises, instead focusing on local and smaller-bore issues. Tip calculator, anyone?

Why Hillary Clinton Doesn’t Really Have a Mitt Romney Problem

THE FEED
9 mins ago
lost in translation
lost in translation
The Spy Who Wasn’t
By Paula Aceves
Baimadajie Angwang wanted a visa for his daughter. He got charged with being an “insider threat” instead.
1/30/2023
royals
royals
King Charles Is Ready to Trash Harry — or Declare a Truce
By Margaret Hartmann
Or Prince Harry is right about the U.K. press relentlessly peddling utter nonsense.
1/30/2023
tyre nichols
tyre nichols
A Sixth Officer Has Been Suspended After Tyre Nichols’s Death: Updates
By Intelligencer Staff
The officer was relieved of duty the same day the five officers charged with murder were fired for the beating.