Here is some of the trenchant commentary Senator Kirsten Gillibrand’s colleagues have shared with her about her own damn body during her time in Congress.

“Good thing you’re working out, because you wouldn’t want to get porky!” – an older male colleague

“You know, Kirsten, you’re even pretty when you’re fat.” – a Southern member of Congress, while holding her arm

“When I first met you in 2006 you were beautiful, a breath of fresh air. To win [the special election], you need to be beautiful again.” – a labor leader

“Don’t lose too much weight now. I like my girls chubby.” – one of her favorite members, while squeezing her waist 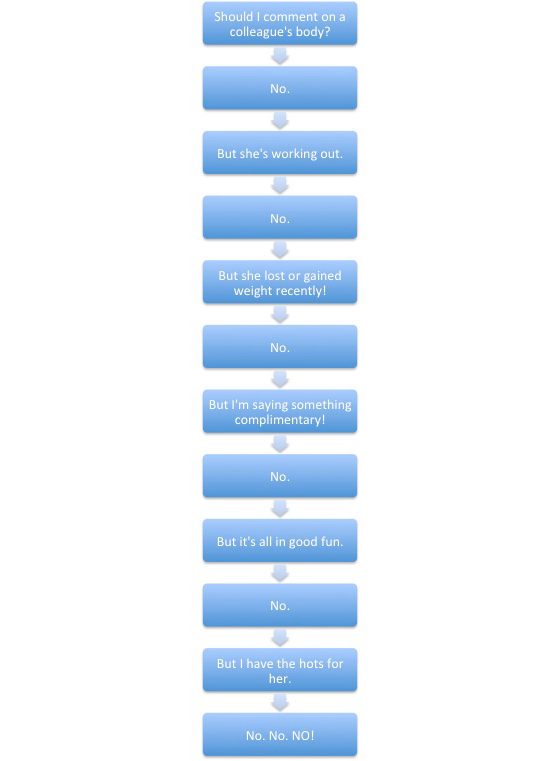 Unfortunately, Gillibrand is keeping her colleagues’ identities a secret, so they won’t get the proper public shaming they deserve. But to help these civic-minded geniuses understand when it is appropriate to comment on a woman’s physical appearance here and now in the 21st century, I have created a flowchart. 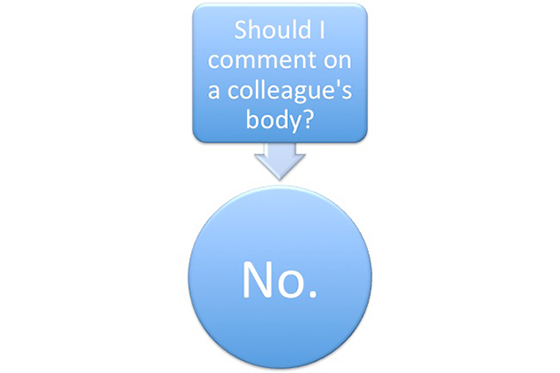 8:00 a.m.
the system
the system
Herschel Walker Is the Last Republican Standing
By Zak Cheney-Rice
His runoff campaign goes all in on Trumpism.
12/4/2022
vision 2024
vision 2024
Joe Biden’s Actually Not-at-All-Bad Year
By Ed Kilgore
2022 could have gone so much worse for Biden. 2024 — and all the steps he must take to show he’s still electable — looms next.
12/4/2022
early and often
early and often
Trump Admits the U.S. Constitution Is Against Him
By Chas Danner
The former president wants to terminate the parts that prevent him from overturning his 2020 election loss.
12/3/2022
games
games
The U.S. Team Can Hold Their Heads High
By Will Leitch
Losing to the Netherlands was deeply frustrating, but the Americans’ best days are ahead of them.
12/3/2022
screen time
screen time
The Machine Will Speak With You Now
By John Herrman
DALL-E’s fun, impressive, and somewhat unsettling chatbot sibling is open to the public.
12/3/2022
early and often
early and often
Why Democrats Upended Their Primary Calendar
By Ed Kilgore
The old Iowa–New Hampshire duopoly is history.
12/3/2022
encounter
encounter
Roger Bennett Is U.S. Soccer’s Biggest Fan
By Matt Stieb
He may speak with an English accent, but he has distinctly American ingenuity.
12/2/2022
games
games
The U.S. Can Absolutely Beat the Netherlands on Saturday
By Will Leitch
Your guide to this weekend’s very big, very winnable game.
12/2/2022
the money game
the money game
Sam Bankman-Fried May Regret Throwing Caroline Ellison Under the Bus
By Kevin T. Dugan
The former FTX CEO cracked on his apology tour and may have handed prosecutors a gift.
12/2/2022
stop the presses
stop the presses
The New York Times Newsroom Gets Ready to Walk Out
By Shawn McCreesh
It’s a frosty winter for the media business.
12/2/2022
the national interest
the national interest
Kanye’s Willing Republican Partners
By Jonathan Chait
First they ignore the extremists. Then they quietly accept them.
12/2/2022
politics
politics
Not Even Alex Jones Can Help Kanye West
By Nia Prater
The Infowars host kept trying to let him denounce Nazis, but he doubled down on his admiration of Hitler.
12/2/2022
the group portrait
the group portrait
Elon Musk’s Former Employees Pour One Out for Twitter
By James D. Walsh
In New York, they gathered at a favorite post-work bar. They commiserated, gossiped, swapped numbers, and promised to keep in touch.
12/2/2022
the law
the law
Why Hasn’t Sam Bankman-Fried Been Arrested Yet?
By Ankush Khardori
Bernie Madoff was arrested in a matter of days after his fraud came to light, but SBF is still a free man. What gives?
12/1/2022
mar-a-lago raid
mar-a-lago raid
Appeals Court Smacks Down Judge Who Ruled for Trump Over FBI
By Chas Danner
The 11th Circuit Court of Appeals excoriated U.S. District Judge Aileen M. Cannon’s interference in the Mar-a-Lago raid investigation.
12/1/2022
2022 midterms
2022 midterms
Why Did Democrats Get the Late Breaks in the Midterms?
By Ed Kilgore
A lot of the shock and awe over the midterm results was the product of an expectation of a late Republican surge that didn’t happen.
12/1/2022
2022 midterms
2022 midterms
Another Former Lover Accuses Herschel Walker of Misconduct
By Ed Kilgore
Many women have painted a portrait of Walker as an unstable and violence-prone man possibly suffering from untreated mental illness.
12/1/2022
early and often
early and often
Democrats Should Worry About Signs of Lower Black Turnout
By Ed Kilgore
Even in states where Black candidates headed up Democratic tickets, turnout was down. Democrats need to figure out why that happened.
12/1/2022
the money game
the money game
Why The Economy Is Starting To Feel Good All Of A Sudden
By Kevin T. Dugan
The Federal Reserve looks ready to ease up on throttling the economy. Have we averted disaster?
12/1/2022
sbf: the virtue was the con
sbf: the virtue was the con
What Does Sam Bankman-Fried Have to Say for Himself?
By Jen Wieczner
An interview with the disgraced CEO.
11/30/2022
early and often
early and often
The Many Ways MAGA Republicans Threaten Kevin McCarthy
By Ed Kilgore
The House Freedom Caucus and its MAGA allies want power over their party’s House caucus. But above all, they want scorched earth between the parties.
11/30/2022
royal family
royal family
It’s Another Chapter of Racism and the Royal Family
By Benjamin Hart
A royal aide allegedly asked a British guest at Buckingham Palace what part of Africa she was from.