Russia’s intentions in sending an aid convoy to rebel-held areas of Ukraine were not totally pure-hearted, it now seems. Just as the familiar white Russian aid trucks approached the Ukrainian border, they paused, allowing a column of armored personnel carriers to cross into the neighboring country instead.

The Guardian’s Shaun Walker was on the scene, and saw as many as 23 APCs, plus support vehicles, cross the border after nightfall:

Erm ok so this isn't humanitarian aid. Column of over 20 APCs, 10km from the Ukraine border, and heading closer pic.twitter.com/OMvJmHzsx1

To clarify. APC column separate to humanitarian convoy, which has halted. Is moving V close to border. But not size of proper invasion force

So @RolandOliphant and I just saw a column of APCs and vehicles with official Russian military plates cross border into Ukraine.

Walker called it “incontrovertible evidence of what Ukraine has long claimed – that Russian troops are active inside its borders.” The Interpreter magazine shared this video, purportedly also showing Putin’s “humanitarian column”:

The convoy also appeared to be headed farther south than the earlier-agreed-upon crossing point, while latest reports claim to have seen Russian tanks on Ukrainian roads far from the convoy. Not a full-scale invasion, perhaps, but certainly a show of force.

At the same time, Donetsk — the city near which rebels shot down Malaysian Airlines Flight 17 several weeks ago — is starting to resemble a war zone. The Kyiv Post’s Christopher Miller reports heavy shelling as Ukrainian forces battle separatists:

At least 2 civilians killed when 7 or 8 shells exploded in central #Donetsk around 1pm today. Fired from NW. pic.twitter.com/DsWwd6M2kh

The trucks currently stalled just east of the Ukrainian border actually do seem to be carrying much-needed aid. (Reports say that there are over 200 aid trucks in the convoy.) Journalists who were allowed to poke around inside reported seeing buckwheat, which is popular as a breakfast food, as well as sleeping bags. But no one is certain of when — or whether — they will actually make it into Ukraine.

Meanwhile, in a parallel universe, RT sees nothing out of the ordinary: 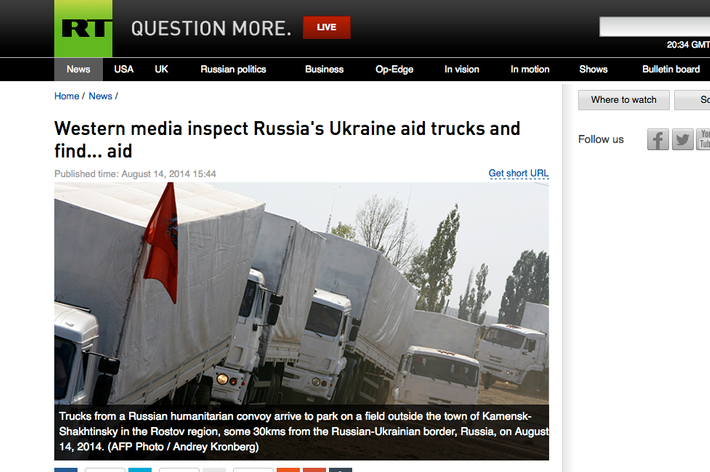