Smile, Zuck! They like you! Photo: David Ramos/Getty Images

Bloomberg Businessweek’s cover story this week is a re-assessment of tech culture by Joel Stein, titled “In Defense of the Silicon Valley Tech Bro.” The piece is predicated on the idea that Silicon Valley is the target of mass revulsion — that Google and Facebook and a cadre of arrogant start-up geeks have turned the tide of public opinion against the Bay Area tech elite — and that this subculture, as annoying as it can be, needs to be defended against the coming onslaught. “Occupy Silicon Valley has begun,” Stein writes.

You see this kind of premise a lot — hell, I’ve used it, too — and while it’s a tempting frame for a story about Silicon Valley culture and politics, it’s also often wildly exaggerated.

Stein’s evidence for the mounting opposition to Silicon Valley is stuff you’ve heard before: protesters barfing on Google buses, anti-tech demonstrations in San Francisco and Portland, techies being mugged for their Google Glass, the HBO show, the kind of oblivious privilege that is often mocked by Valleywag. It’s largely the same list of grievances that prodded Wired to declare that “the psychic bond with Silicon Valley might be fraying,” and led to stories such as “Zero likes: how the world came to hate Silicon Valley.” Every highbrow publication from The New Yorker to The New York Review of Books has toyed around with the idea that tech companies are our new cultural villains.

But, wait a minute. A quick look at the data reveals that far from being reviled, tech companies are actually widely beloved by the general public. A Wall Street Journal/NBC News poll taken in May found that the tech industry came in behind only the military in a list of institutions Americans had confidence in. Google, Apple, and Amazon perennially top Fortune’s list of the most admired companies, finishing above even Disney and Starbucks. Young people are dying to get jobs at Google, Apple, and Microsoft, according to Universum’s annual survey of college students. And in a recent survey of LinkedIn members about which companies they wanted to work for, tech companies took all five top spots. Even in San Francisco, ground zero for the supposed tech backlash, 72 percent of respondents to a recent poll expressed a favorable opinion of tech workers.

I asked YouGov BrandIndex, a firm that tracks public perception of leading companies, to pull some data for me about how Internet companies fared in the court of public opinion compared to Wall Street investment banks over the last five years. The results weren’t even close — since 2009, the buzz about Internet companies has been entirely positive (blue line) while perception of banks (tan line) has stayed consistently negative. 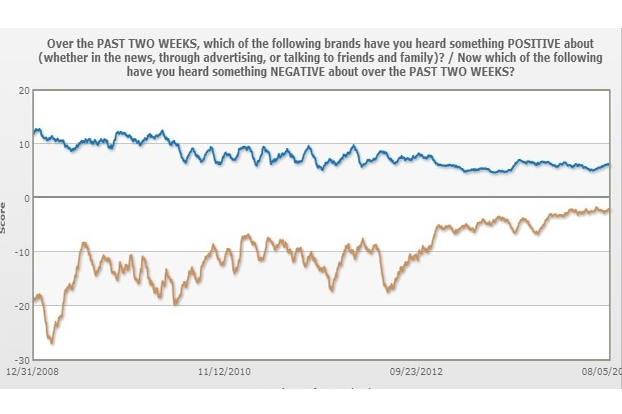 When people have gripes with Silicon Valley, it’s largely because they’re displeased with the actual tech products themselves. In the most recent American Customer Satisfaction Index survey, which asks consumers about whether they’re happy with a given product or service, social media sites were the fourth lowest rated business category, with only 71 percent approval, putting them ahead of only airlines, subscription TV companies, and internet service providers. ACSI survey numbers for tech companies tend to fluctuate with changes to the user experience of those companies’ products, not with corporate news, or sentiment about the direction of the industry as a whole. Ask a normal Facebook user what she dislikes about the company, and she’ll likely point to a recent news feed redesign, not diversity or drones.

Why does it seem, then, like suspicion of Silicon Valley is everywhere? My theory is that three groups are predominantly responsible for the apparent backlash: San Francisco progressives, coastal intellectuals, and journalists. All of these groups have legitimate gripes with the tech industry. San Francisco progressives are upset that tech companies are changing the cultural fabric of the Bay Area, pushing up rents, and in various ways being less-than-stellar corporate citizens. Coastal intellectuals blanch at Silicon Valley’s arrogance, its lack of diversity, its monopolistic tendencies, and labor-unfriendly practices, its blasé attitude toward regulation, and the disconnect between its change-the-world ethos and its capitalistic reality. Journalists are skeptical of powerful institutions by nature and training, and many (including yours truly) want to be part of a corrective to years of fawning coverage of the tech industry by trade publications.

These groups are influential, and they have sway with the types of opinion-makers who write op-eds in newspapers and sit on cable news panels. But they’re by no means representative of the country as a whole. And while we shouldn’t give Silicon Valley a free pass, or stop calling out its frequent missteps, we also shouldn’t mistake the localized backlash to the tech industry’s practices for widespread disgust. Tech companies might not be popular in the Mission, or on MSNBC, but they’re doing just fine everywhere else.

+Comments Leave a Comment
The Silicon Valley Backlash Has Been Exaggerated

THE FEED
14 mins ago
the inside game
the inside game
What Biden Privately Thinks About the Midterms
By Gabriel Debenedetti
Behind closed doors, his 2022 priorities (like beating Ron Johnson) are also about his 2024 reelection.
10/6/2022
politics
politics
Biden Pardons Thousands of Marijuana Charges, ‘Dank Brandon’ Memes Follow
By Nia Prater
The president frees up federal weed policy.
10/6/2022
politics
politics
Feds Reportedly Think They Have Enough to Charge Hunter Biden
By Benjamin Hart
Investigators are said to have enough evidence to charge the president’s son over unpaid taxes and allegedly lying on an application to buy a gun.