Amid the ongoing tension in Ferguson, two St. Louis–area cops have been suspended for making hateful, racist remarks. It’s worth noting that both of these guys spewed their respective garbage under their own names online, which indicating that they weren’t too worried about getting in trouble for it.

The first offender is St. Louis County officer Dan Page, who initially gained notoriety by pushing Don Lemon as he reported from a Ferguson demonstration earlier this week.

Unsurprisingly, the CNN anchor made it his business to look into Page’s background. The St. Louis Post-Dispatch reports that after reporting Page’s behavior to St. Louis County police chief Jon Belmar, Lemon directed his attention to a video of a disgusting speech Page made to a group called the Oath Keepers of St. Louis and St. Charles. First posted to YouTube in 2012, Page’s hour-long talk rant included his take on black people (whom he called “little perverts”), President Obama (“that illegal alien claiming to be president”), gay people (“sodomites”), Muslims (“they will kill you”), and his own willingness to kill people. “I personally believe in Jesus Christ as my lord savior, but I’m also a killer. I’ve killed a lot. And if I need to, I’ll kill a whole bunch more. If you don’t want to get killed, don’t show up in front of me, it’s that simple. I have no problem with it. God did not raise me to be a coward,” he explained. You can watch the whole thing below, though we don’t recommend it.

On Sunday, Belmar said that while Page’s comments about minorities were “beyond the scope of acceptable police conduct,” it was “the comments on killing” that “deeply disturbed” him. Page, a 35-year veteran of the force and a former Green Beret, will not be doing any cop work until St. Louis County’s internal affairs unit has completed its investigation of him.

Next up is the comparatively tame officer Matthew Pappert of the Glendale Police Department, which operates about 15 minutes away from where Darren Wilson killed Michael Brown. The Daily Caller was the first to note that Pappert’s Facebook page began filling up with ugly complaints about the protests in Ferguson starting on August 17. 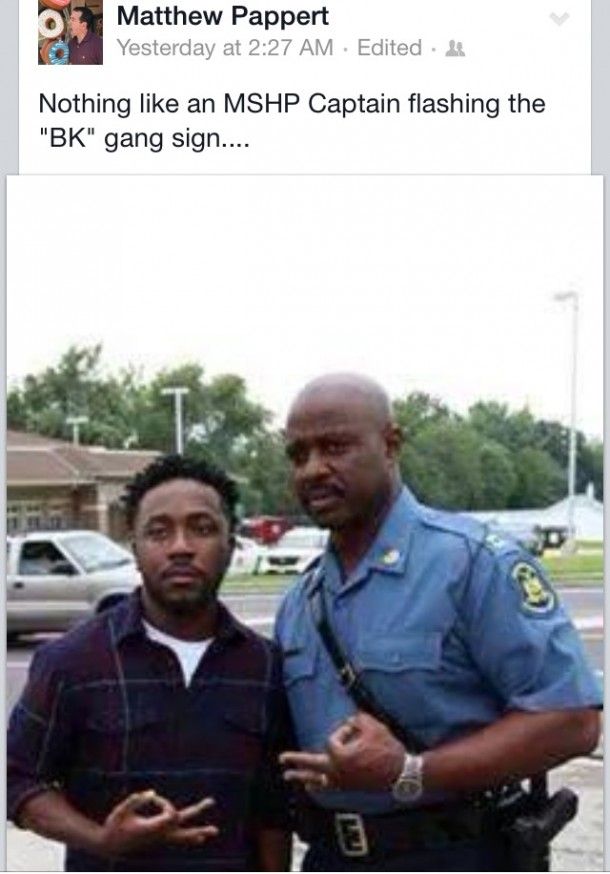 Pappert also referred to the demonstrators as “a burden on society and a blight on the community,” “thugs,” and “white trash,” and suggested that “a Muslim with a backpack” deal with them somehow. After viewing the posts, Glendale police chief Jeffrey Beaton told the Post-Dispatch that Pappert had been taken off duty while the department conducts an internal investigation of him. “These type of allegations could result in disciplinary action up to and including termination,” Beaton said.

Page and Pappert join St. Ann Police Department officer Ray “Go Fuck Yourself” Albers, who was suspended from his job earlier this week after he was caught pointing a gun at Ferguson protesters, whom he threatened to “fucking kill.” Three’s a trend! Unfortunately, we didn’t really need these examples to figure out that the cops in the St. Louis area tend to get out of control.