The major premise of that extremely problematic New York Times Magazine story about the “Libertarian Moment” is that young voters have at least vaguely libertarian beliefs. They don’t. The corollary is that, since young voters are kinda libertarian, Rand Paul is uniquely well-positioned to deliver them to his party, compared with other Republicans. This assumption also turns out to lack any evidence. 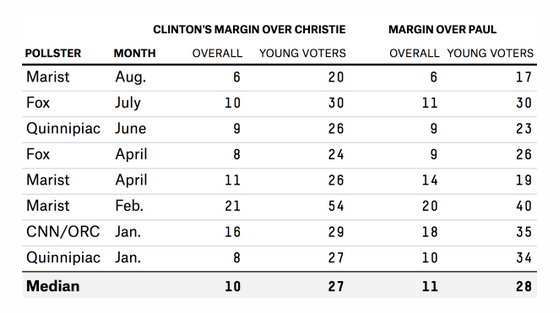 Now, to be sure, this isn’t a completely fair measure for Paul. He is a relatively new figure on the national scene, and perhaps more exposure will bring his appealing qualities to the surface.

Except we have another test of this. Paul ran a statewide race for senator in 2010, which gave him an excellent opportunity to display his youth appeal. Young voters were the only age cohort not to support him:

If Paul couldn’t win young voters in heavily Republican Kentucky, during a non-presidential, Republican-wave election, there’s not much reason to think he could win them during a presidential election among America writ large. Could he merely lose less badly than another Republican? As Ramesh Ponnuru — who found the data cited above — further argues, Paul’s drop-off with young voters was about the same as Roy Blount and John Boozman, two other Republican senators who ran that year.

Paul and his allies have won quite a propaganda coup by implanting the notion that he offers a unique appeal to the youngest voters. (Buoyed by the Times Magazine endorsement, and undaunted by the gaping holes in its data, Reason is plunging ahead with its predictions of the libertarian future.) It could happen. There is no reason to think it will.