Umm Ubaydah doesn’t have a blue checkmark verifying her as a muhajirah on Twitter.  And yet, she’s become, along with a group of other young Western muslim women, an active online surrogate for the terrorist group ISIS.

While their husbands are out fighting, these women communicate ISIS’s message to the outside world, and particularly to other women curious about the same cause. Because of their youth and Western upbringings, they do so in slang and emoji, intermixed with a handful of Islamic phrases that they have picked up. As the recent widespread distribution of beheading videos on U.S. social media has shown, ISIS brings plenty of propaganda savvy to its brutal campaign. Women like Umm Ubaydah, who uses the handle @al_Khanssaa (possibly a reference to the poet) are a critical component of that effort.

Mostly in their late teens or early 20s, these women meet through Twitter, Tumblr, and Kik, where they exchange verses of the Quran, statements of English- and Arabic-speaking radical preachers, and news about the advances of the Islamic state. The most ardent among them, including Umm Ubaydah and her friends — Umm Layth, whose real name was revealed to be Aqsa Mahmood; and Umm Haritha, a Canadian immigrant, whose online moniker is @bintladen, a portmanteau of the Arabic word for girl and Osama bin Laden — have gone further, moving to Syria from Europe and North America to find husbands among ISIS soldiers.

“We have a long history of women’s involvement online and as propagandists” in jihadi movements, says Mia Bloom, a professor at the University of Massachusetts, Lowell’s Center for Security and Terrorism studies and author of a book on female suicide terrorists. Dozens of purported jihadis have cropped up online in recent years, including over a dozen women. (Twitter has recently stepped up its efforts to suspend ISIS-linked users.) Some of them are likely fakes, Bloom says, but a few stand out as particularly believable. To evaluate the veracity of online accounts, experts like Bloom consider the person’s interactions with others, length of time active, and consistency across different platforms. Umm Ubaydah, like the others, checks out on all three.

Umm Ubaydah emerged on Twitter at around the same time as ISIS announced the creation of two female brigades in its territories, albeit not for active combat: one to keep men from the opposition from dressing up in traditional, concealing female clothing as they pass through checkpoints, and another to enforce ISIS’s strict standards of dress and morality on other women. But these Western immigrants, based on their online presences, are taking on even more traditional roles. According to Humera Khan, head of a think tank focused on preventing radicalization and extremism, Umm Ubaydah’s off-line friendships are clear in her online interactions, and draw other women in.

When I reached out to Umm Ubaydah via Kik last week, she didn’t respond, although she quickly tweeted about Western journalists asking her for her thoughts on Nutella. But an analysis of her timeline tells at least some of her story.

From the ISIS-controlled city of Manbij, Syria, Umm Ubaydah gives advice to those considering making the crossing: what to pack, what to expect, and how to avoid detection on their way to joining the hundreds of Westerners now fighting on behalf of the Islamic state. ISIS propaganda and hopes about becoming a martyr are punctuated with teen internet slang — “#lol,” “tbh” — and emoji. She writes about being a wife and aspiring to become a mother, and bringing up the next generation of mujahids, or jihadis. Umm Ubaydah tells women that there is not much for them to do in the state, that their contribution comes in the home and through reaching out to other women online. This, according to Bloom, is typical of successful militant groups: Women only join the front lines as suicide bombers or combatants if the group has trouble attracting men. If that’s not a concern, marrying jihadis to like-minded women serves to reinforce their motivations.

Believed to be in her teens or early 20s, Umm Ubaydah won’t reveal where she’s from on Twitter, except that it’s in Northern Europe (likely Sweden, according to Khan, the think tank director). Instead of a selfie, her Twitter icon is a spliced-together image of Osama bin Laden and ISIS Caliph Abu bakr al-Baghdadi. Among the few biographical details she openly shares is that she is of Somali descent. 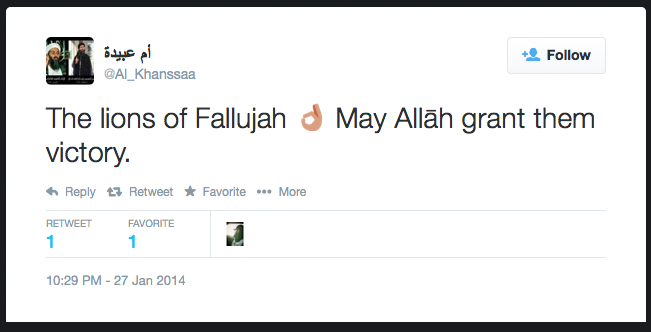 In January, ISIS made strong inroads into Iraq, capturing Fallujah, a centrally located city on the Euphrates river. Umm Ubaydah tweeted gleefully about the takeover later that month, and retweeted another militant about ISIS’s attacks on the Abu Ghraib prison in Iraq. (Militants had raided the nearby prison the previous summer, freeing at least several hundred inmates.)

From her hometown, Umm Ubaydah began sharing messages aligned with ISIS’s cause, often annotated with emoji: 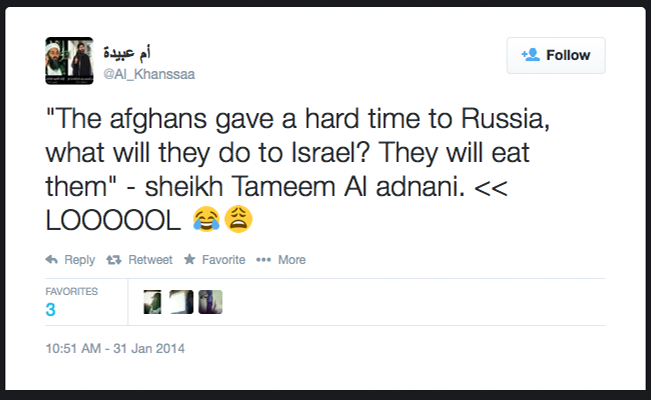 Like many of the women, Umm Ubaydah joined ISIS against her family’s wishes. Her mother seems to have tried to convinced her to take off the niqab, a head covering that only exposes the eyes and is among the more conservative worn by Muslim women. “May Allāh make it easier for all those who are being tested by their mothers,” Umm Ubaydah tweeted in January in a typical complaint. (Her friends also shared stories of encountering suspicion and difficulty from their families.) 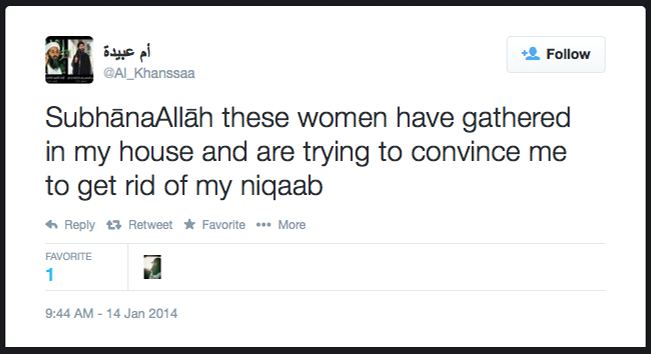 That same month, the first hints of her impending hijra, or migration, began to appear. Like most of the muhajirahs — immigrants — on social media, Umm Ubaydah didn’t outright declare her intention to join ISIS in Syria because doing so would flag authorities. Instead, in mid-January, she tweeted out an image of the weather in her hometown. 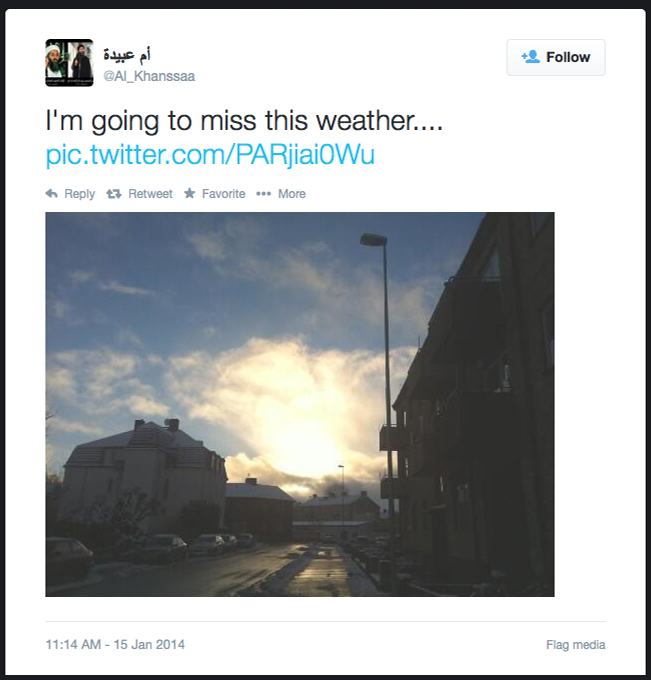 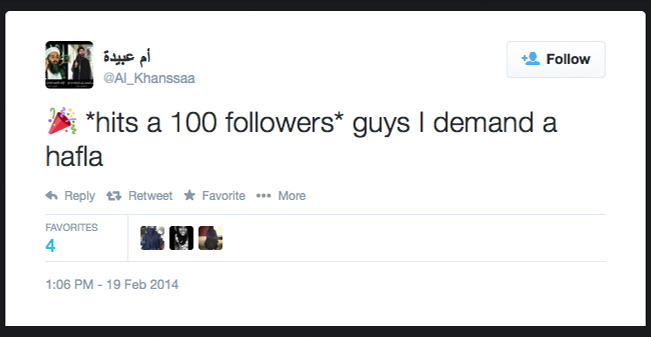 Twitter, Tumblr, and Kik are all popular ways to communicate for the muhajirahs. According to Khan, the requirement for joining ISIS is getting one person who is already there to vouch for your sincere beliefs, and the internet is where many of those connections happen. Women looking to make hijra get in touch with Muslim men to help them do so. Umm Ubaydah even noted at one point that many people were proposing marriage on the question-and-answer site Ask.fm.

In February, she weighed in on the rift between Jabhat al-Nusra, an Al Qaeda affiliate fighting in Syria, and ISIS. The media often described the split as al-Nusra’s denunciation of the “more radical” ISIS, as the group began to adopt tactics even Al Qaeda found too extreme. (Al Nusra is still fighting in Syria, but seems focused more on the original goal of defeating the Assad regime. It is also less focused on recruiting international fighters.) 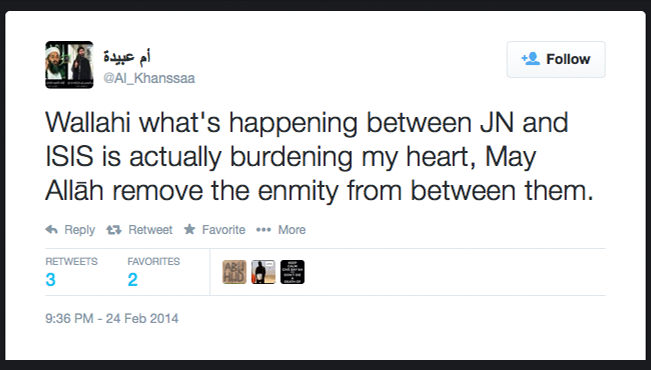 The same views that proved too radical for alliances with other Syrian opposition groups often alienate these women from their families. Umm Ubaydah tweeted about encountering resistance from her family when she tried to preach to them. Mahmood, the British woman who tweeted as Umm Layth (she’s since deleted her account), also described her family’s suspicion when she asked her father to bring some books back from a trip to Pakistan.

Sometime between late February and the end of March, Umm Ubaydah followed what is the typical route for those who want to go to Syria: She found her way to Turkey and crossed over the land border with Syria, where she made her way to a small city in the Aleppo Governorate called Manbij. (Online discussions between the women even tell prospective recruits that how much money they must bring depends on how long they plan on staying in Turkey.) She quickly found that all the women living under ISIS rule didn’t quite live up to her standards of piety. 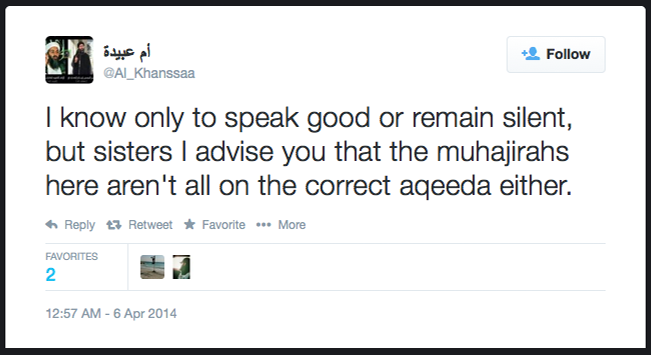 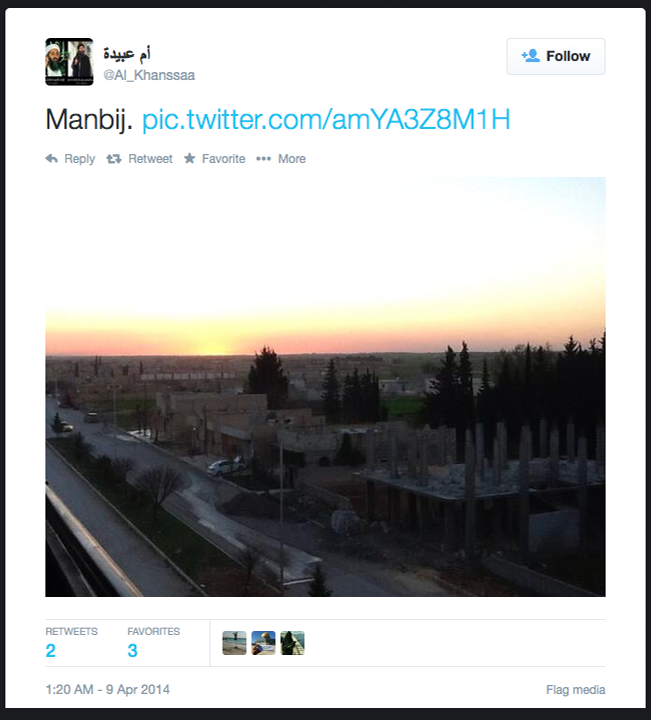 In Manbij, she married a mujahid, a male fighter. She wrote on Twitter that there is not much for women to do in the Islamic State except support their families. Umm Ubaydah’s friend Mahmood, known online as Umm Layth, wrote that her day revolves around household duties. “I will be straight up and blunt with you all, there is absolutely nothing for sisters to participate in Qitaal [fighting],” she wrote, adding that the four most lauded women in Islam are the ones who brought up the best men. 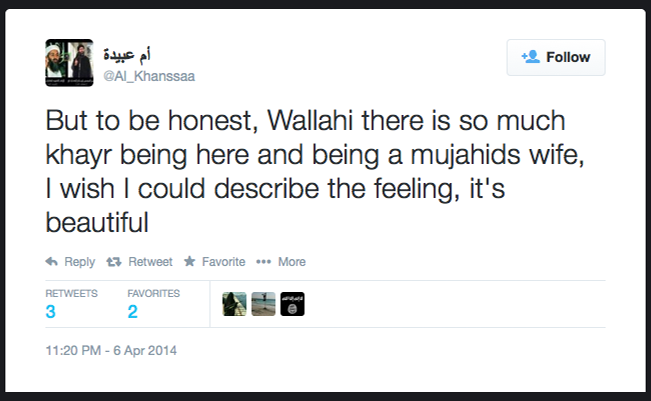 Another way Umm Ubaydah contributes to the state is through her internet activism. She has answered questions from tens of women on her blog and freely gives out her Kik username for more personal conversations on how to make hijra. 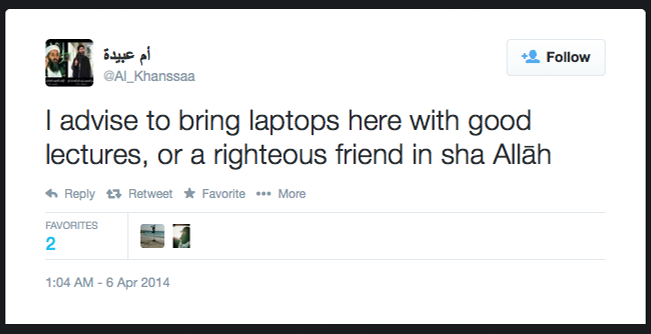 Umm Ubaydah and her friends frequently post about their day-to-day lives and hanging out with one another. 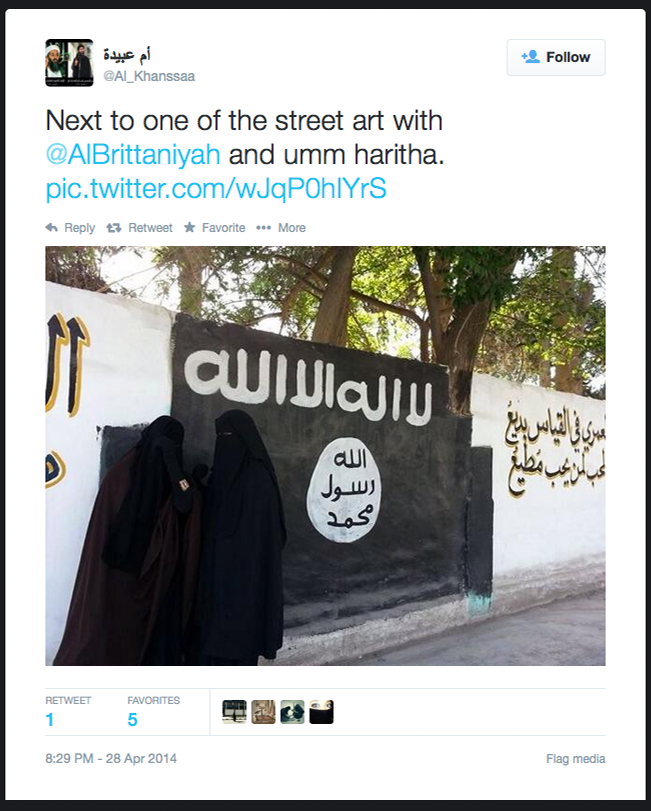 They are always dressed in black from head to toe, with not even eyes visible through their niqabs. In the tweet above, Umm Ubaydah took a photo of her friend Mahmood, known as Umm Layth, and Umm Haritha. All three women married after moving to Syria, and Umm Haritha’s husband was killed shortly thereafter.

A lot of Umm Ubaydah’s energy is spent reprimanding Muslims in the West who don’t make hijra to join the Islamic State, and reminding them that it is their obligation to do so: 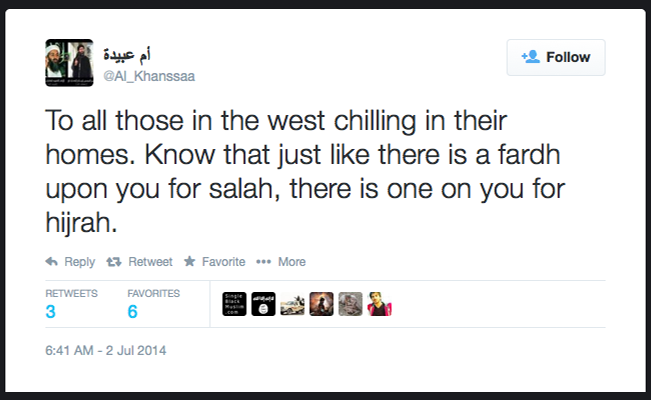 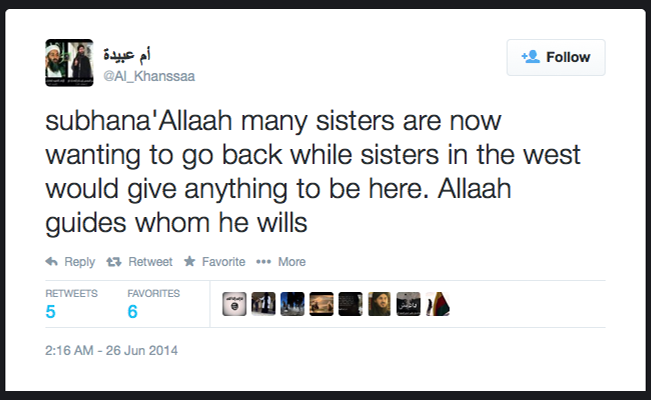 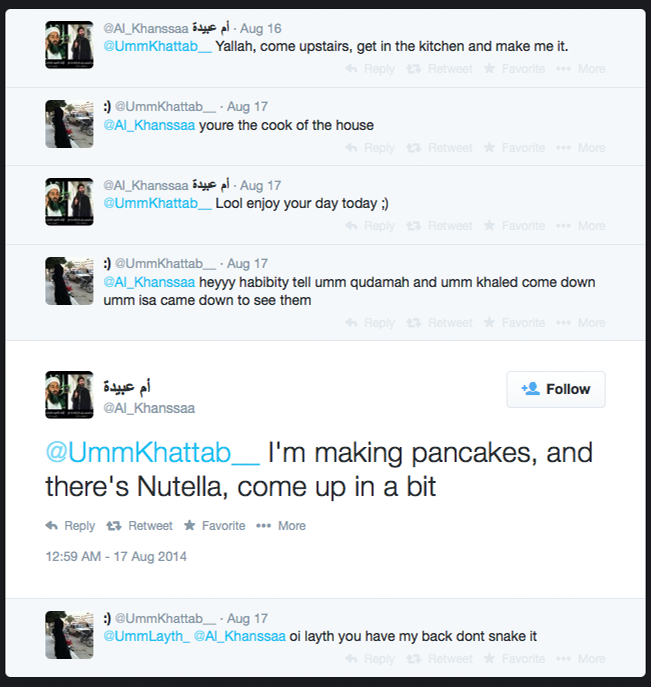 On the same night as the Nutella pancakes, a bomb struck near the house where Umm Ubaydah was staying. She tweeted about it, ending on “#shaheedahInshAllah” — a martyr, God willing. 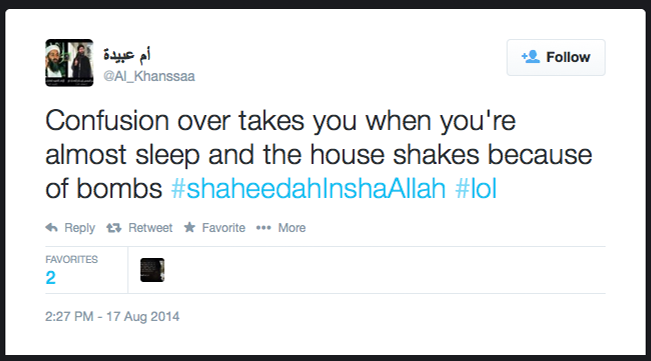 Here’s her comment on the beheading of American journalist James Foley by ISIS militants in August: 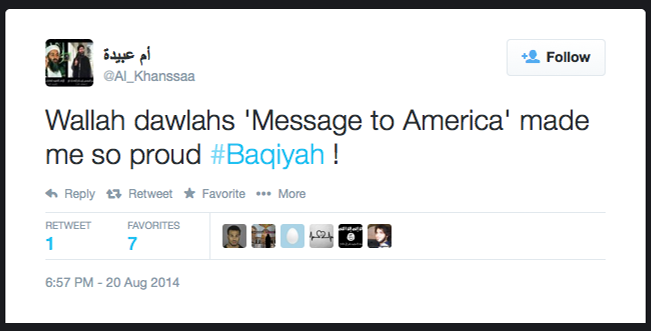 Last week, I messaged Umm Ubaydah on Kik, asking for comment on the muhajirahs’ Nutella obsession. She did not return requests for comment, but I did get this. 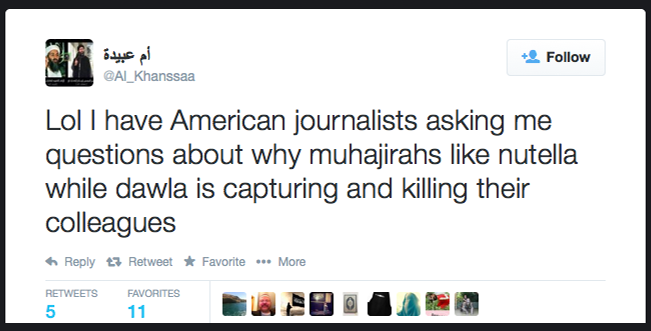 A few hours later, ISIS released a video of the beheading of a second journalist, Steven Sotloff. When asked about it on Tumblr, Umm Ubaydah remarked, “I wish I did it.”

It’s statements like the one above that will make it hard for Umm Ubaydah to leave ISIS if she ever grows disillusioned. Humera Khan, the think-tank director, worries that the young people who join ISIS have no way to leave if they decide they want to do so. Yet returning home, like Aqsa Mahmood’s parents have asked her to do, means a prison sentence, perhaps even for life, and there doesn’t seem to be an “exit ramp.”

Khan’s other concern is for their families, because one family member joining the fight is more likely to produce another person who will, too. (Indeed, Umm Ubaydah frequently refers back to a father she says left for jihad when she was younger than 4 years old.) “How do you change the environment at home, so that it’s not okay?” Khan asks.

+Comments Leave a Comment
Meet the Female Recruiters of ISIS