While most Americans were out enjoying the long weekend, Rick Perry, or some person with access to Rick Perry’s personal Twitter account, was stewing over his recent felony indictment. Perry’s two abuse-of-power charges are the result of a showdown with Travis County District Attorney Rosemary Lehmburg, a Democrat who was caught driving drunk last year. After Lehmburg’s arrest, Perry threatened to slash her office’s budget unless she gave her up job. Lehmburg refused to resign, so Perry withheld the money — and that’s why we now have a glasses-free mug shot of the Texas governor. It’s also why we now have the especially dumb beer ad parody that Perry tweeted in the middle of Sunday night.

The tweet was a play on Dos Equis’s Most Interesting Man in the World meme with Lehmburg’s face Photoshopped in, plus a mysterious “A2.” 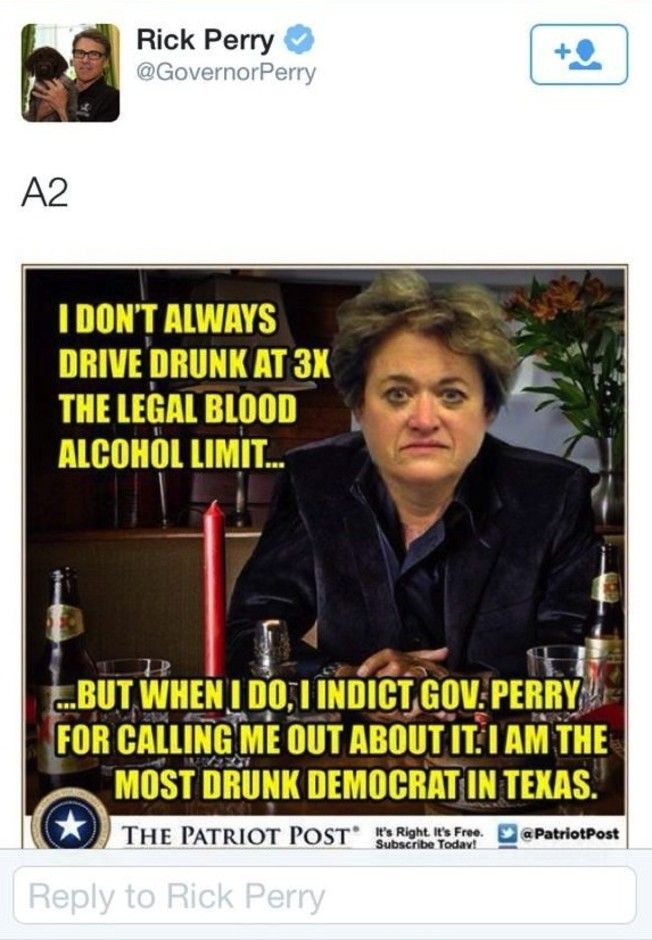 While it’s difficult to say whether Lehmburg is the Most Drunk Democrat in Texas, the Houston Chronicle notes that the post definitely did contain at least one error: Perry was indicted by a grand jury, not Lehmburg, as she recused herself from the case. Anyway, the tweet was deleted shortly after people began noting that it was not in good taste.

The man didn’t even have the decency to pretend he’d been hacked.

THE FEED
20 mins ago
sports
sports
Brittney Griner Released by Russia in Prisoner Swap
By Margaret Hartmann
The WNBA star is headed home after being released in a 1-for-1 prisoner swap for Russian arms dealer Viktor Bout.
8:10 a.m.
the city politic
the city politic
The Queens Native Tasked With Making Legal Weed Work
By Mychal Denzel Smith
Christopher Alexander is building New York’s budding market from scratch.
12/7/2022
early and often
early and often
Letitia James’s Office Is Facing Its Own Sexual-Harassment Scandal
By Nia Prater
The New York attorney general has been accused of handling sexual-harassment claims against her chief of staff differently than those against Cuomo.

12/7/2022
tremendous content
tremendous content
Trump Is Paying His Diet Coke Valet’s Legal Fees
By Margaret Hartmann
The Feds see Walt Nauta as a key witness against Trump in the Mar-a-Lago classified-documents case. But it turns out their bond is the real thing.
12/7/2022
early and often
early and often
It Looks Like the Supreme Court Will Not Blow Up Our Democracy (for Now)
By Jay Michaelson
A theory that would make state legislatures the ultimate decider of elections and overturn the Constitution as we know it gets its day in court.
12/7/2022
early and often
early and often
Guess Where More of Trump’s Stolen Classified Documents Turned Up
By Nia Prater
Hint: they were located among “suits and swords and wrestling belts and all sorts of things.”
12/7/2022
early and often
early and often
Will Biden’s Primary-Calendar Power Play Actually Work?
By Ed Kilgore
There are some obstacles in the road already, and the real implications of the new calendar may not be realized until 2028.
12/7/2022
the far right
the far right
German QAnon Spinoff Plotted Coup to Put Fake Prince in Charge
By Matt Stieb
Police arrested 25 people involved in an alleged plan to overthrow the government and install a disgraced aristocrat as head of state.
12/7/2022
the sports section
the sports section
The Yankees Averted Disaster by Signing Aaron Judge
By Joe DeLessio
Baseball is entertainment, and Judge is an entertainer. The Yankees simply had to keep him.
12/7/2022
early and often
early and often
Raphael Warnock Is the Exception in Georgia, Not the Rule
By Zak Cheney-Rice
The pastor turned politician defied the odds again, but Georgia is still barely a purple state.
12/7/2022
the city politic
the city politic
Meet New York’s New Republican Voters
By Ross Barkan
Crime and schools are causing a political realignment in the city, led by communities of recent immigrants.
12/6/2022
2022 midterms
2022 midterms
Herschel Walker Didn’t Just Lose; Raphael Warnock Won
By Ed Kilgore
Walker was indeed a bad Trump-recruited candidate. But Warnock ran a very impressive campaign once again.
12/6/2022
tremendous content
tremendous content
Rudy Giuliani’s 5 Worst Excuses From His Attorney-Misconduct Hearing
By Margaret Hartmann
The former mayor has offered several bold arguments for why his efforts to overturn the 2020 election shouldn’t cost him his D.C. law license.
12/6/2022
exhibit a
exhibit a
The Trump Organization Was Convicted After a Truly Embarrassing Defense
By Ankush Khardori
Any lawyer would have a hard time convincing a jury of the company’s innocence, but these lawyers acted like buffoons.
12/6/2022
the money game
the money game
5 Takeaways From Three Arrows Capital’s New York Bankruptcy Hearing
By Jen Wieczner
Su Zhu and Kyle Davies are surfing and painting in exile. Also dodging creditors and the law.
12/6/2022
politics
politics
Brian Sicknick’s Family Snubs Mitch McConnell and Kevin McCarthy
By Nia Prater
Family members of a police officer who died following the attack on the Capitol refused to shake hands with Republican leaders at a medal ceremony .
12/6/2022
poll position
poll position
What the Polls Say Today: It’s Warnock’s Race to Lose
By Ed Kilgore
Even polls that showed Herschel Walker leading in November now show Raphael Warnock slightly ahead.
12/6/2022
whodunnit
whodunnit
Somebody Shot Up a Power Station in North Carolina
By Matt Stieb
The identity and motives of the culprits remain a mystery as thousands struggle without electricity.
12/6/2022
just asking questions
just asking questions
How Frighteningly Strong Meth Has Supercharged Homelessness
By Benjamin Hart
Journalist Sam Quinones on the radically transformed picture of drug addiction in America.
12/6/2022
conservatism
conservatism
Why the GOP Will Lose Its War on ‘Woke Wall Street’
By Eric Levitz
Republicans can’t accept that they dislike modern capitalism, so they’re blaming “ESG” instead.
12/5/2022
volcanoes
volcanoes
Volcanoes Are So Hot Right Now
By Chas Danner
There have been some stunning eruptions at volcanoes on multiple continents in the past few days. No, the world isn’t ending.
12/5/2022
early and often
early and often
Yes, Republicans Still Pose a Threat to Democracy
By Ed Kilgore
The 2022 results do not show that the GOP has given up on ruling without majority support whenever it can or must.
12/5/2022
the future is now
the future is now
That AI Chatbot Wrote a Pretty Decent New York Article
By Intelligencer Staff
Is this the end of journalism as we know it?
12/5/2022
tremendous content
tremendous content
Donald Trump Cost Lara Trump Her Fox News Gig
By Margaret Hartmann
Nepotism giveth, and nepotism taketh away.
12/5/2022
the money game
the money game
Could Caroline Ellison Be Cutting a Deal With the Justice Department?
By Kevin T. Dugan
The former CEO of Alameda Research and Sam Bankman-Fried’s ex-girlfriend might have been spotted in Manhattan.