Tom Cotton is the state-of-the-art Republican candidate — a perfect, and possibly too-perfect, blend of biography and opportunity. Cotton studied at Harvard, came by his conservatism early and fervently, served in Iraq, won the favor of Washington party elites like Bill Kristol, and can win a Senate seat by running in a midterm election in the deep red state of Arkansas. The only thing that might trip up Cotton is his principles, which he is feverishly jettisoning.

Cotton currently serves in the House as a frequent member of the “hell no” caucus, which votes against nearly everything. The trouble is that one of those things was the farm bill, which is popular in Arkansas because it lavishes subsidies upon major state industries. Cotton’s opponent, Mark Pryor, has assailed him for this vote. Cotton has shot back with an ad claiming that this only happened because “President Obama hijacked the farm bill, turning it into a food stamp bill.”

Cotton’s claim, as a myriad of independent fact-checkers have pointed out, is completely false. More interesting than Cotton’s transparent attempts to evade this fact is the ideological synthesis Cotton has developed in the course of making himself acceptable to the Arkansas electorate.

In his untrue ad, Cotton argues that he voted as he did because “career politicians love attaching bad ideas to good ones.” The bad idea here, in Cotton’s telling, is food stamps. The good idea is farm subsidies. This premise is worth considering.

Farm subsidies were created during the New Deal, at the height of both a catastrophic fall in farm incomes (at a time when farmers comprised a far higher share of the economy) and Democratic faith in a centrally planned economy. The planning fad manifested itself in such disasters as the National Recovery Act, a quasi-fascistic price-fixing scheme that failed, was struck down by the Supreme Court, and fortunately abandoned as a policy model in favor of more effective, market-friendly remedies for the excesses of the free market.

Yet farm subsidies have lived on. Their survival has nothing to do with any public policy merits. There is no persuasive economic rationale for why the government should write checks to people who operate farms as opposed to textile mills or construction firms or any other business. (Yes, people need to eat, but the market is capable of supplying food, just as it is capable of supplying clothing and shelter.) Farmers are also more affluent than the average American. Since they are overwhelmingly white and conveniently spread throughout nearly every state, their claim to public subsidy has gained some popular legitimacy.

Faced with his controversial vote against the farm bill, Cotton has urgently fashioned himself as an agri-supremacist. He has urged the locals to ignore the judgment of fact-checking journalists who pronounce his ad false: “I don’t think liberal reporters who call themselves fact checkers spent much time growing up on a farm in Yell County growing up with Len Cotton, so I think I know a little bill more about farming than they do.” Cotton’s identity as a onetime farmboy, by this argument, lends him a superiority in any dispute over farm policy that overrides even the facts themselves. Cotton perhaps first developed this epistemological theory while studying philosophy at Harvard.

Cotton goes further still. Molly Ball, in an engrossing profile, reports that Cotton argues against food stamps because its recipients live high on the hog: “They have steak in their basket, and they have a brand-new iPhone, and they have a brand-new SUV.” As an argument against food stamps, this is laughably false: The program offers a benefit averaging $1.50 per person per meal, and its beneficiaries are quite poor: 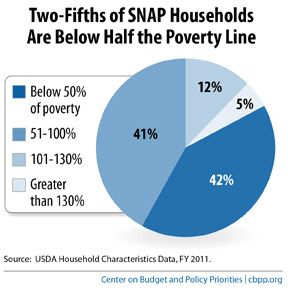 What’s more, the charge Cotton falsely makes against the food-stamp program is in fact completely true about the crop-subsidy program. It furnishes its recipients with lavish benefits and many of of them are millionaires. But this is the program Cotton, even while fighting to the death against the one that feeds extremely poor, hungry people, vows to protect. Hell, he is even named after a major staple crop.

The snag in Cotton’s rapid path to national power turns out to be that his ideology is just a little too consistent. But he has found the solution. He is running not quite as a principled foe of government, but instead as a committed opponent of redistribution. Government is bad insofar as it gives money to the poor and vulnerable. Tom Cotton is going places in the Republican Party.

THE FEED
1:06 p.m.
politics
politics
De Blasio Blindsides Just About Everyone With New Vax Mandate
By Nia Prater
City Hall won’t release guidance for how businesses should enforce the new mandate until December 15, following talks with the business community.
12:14 p.m.
covid-19
covid-19
What We Know About Omicron in New York
By Intelligencer Staff
So far, seven cases of the worrisome new variant have been detected in New York City, along with one on Long Island.
10:58 a.m.
politics
politics
Someone Put France’s Trump-y Presidential Candidate in a Headlock
By Benjamin Hart
Éric Zemmour’s first rally was marked by tension and violence, an atmosphere that matches his rhetoric.

9:00 a.m.
title 42
title 42
Why Is Biden Still Relying on an Idea From Stephen Miller?
By Matt Stieb
At the border, the administration continues to lean on Title 42 to expel migrants based on a public-health pretext that ex-CDC officials say is bogus.
8:00 a.m.
just asking questions
just asking questions
She Was D.C.’s Top Crypto Cop. Now She’s Silicon Valley’s Top Crypto Investor.
By Jen Wieczner
Katie Haun is spreading the Web3 word to everyone from senators to Hollywood stars.
12/5/2021
politics
politics
RIP Bob Dole, Last of the Greatest Generation Presidential Candidates
By Ed Kilgore
Dole was always a bit out of step with his party and his country, which may be considered a compliment now.
12/5/2021
covid-19
covid-19
What We Do and Don’t Know About the Omicron Variant
By Intelligencer Staff
At least 17 states and well over 40 countries have confirmed cases, while scientists search for evidence about how dangerous the new variant is.
12/5/2021
booster shots
booster shots
Vaccine Demand Gets a Boost As Americans Worry Over Omicron
By Matt Stieb
Vaccination rates are at their highest since May, though the majority of doses administered last week were booster shots.
12/5/2021
covid-19
covid-19
What to Know About the New COVID-19 Antiviral Pills
By Paola Rosa-Aquino and Chas Danner
New drugs developed by Pfizer and Merck have shown significant efficacy in reducing severe illness and death from COVID-19.
12/5/2021
politics
politics
David Perdue Will Indeed Primary Governor Brian Kemp in Georgia: Reports
By Paola Rosa-Aquino
The former senator was recruited to run against Kemp by Donald Trump, who has repeatedly vowed to help purge the incumbent GOP governor.
12/5/2021
politics
politics
Longtime Republican Lawmaker Bob Dole Dead at 98
By Paola Rosa-Aquino
The former Senate majority leader, presidential candidate, and World War II veteran died in his sleep on Sunday.
12/5/2021
covid-19
covid-19
Upstate New York Hospitals Are Being Overwhelmed by COVID
By Paola Rosa-Aquino
COVID-19 hospitalizations have more than tripled upstate since August, and the surge has come amid a staffing shortage of health-care workers.
12/5/2021
the fallout
the fallout
CNN Fires Chris Cuomo
By Matt Stieb and Chas Danner
The cable-news host was terminated amid an internal review, days after a former colleague accused him of sexual misconduct.
12/4/2021
foreign policy
foreign policy
U.S. Warns of Possible Invasion of Ukraine by Russia
By Paola Rosa-Aquino
Intelligence officials worry that Russia’s rapid buildup on the border means the country could launch an offensive in early 2022.
12/4/2021
crime
crime
Michigan School Shooter’s Parents Apprehended Following Rare Charges
By Paola Rosa-Aquino
James and Jennifer Crumbley pleaded not guilty to involuntary manslaughter charges on Saturday, days after their son allegedly killed four classmates.
12/4/2021
pandemic
pandemic
Why Omicron and Delta Could Be a ‘Twin Epidemic’
By James D. Walsh
Dr. Peter Hotez sorts through the uncertainty about the new variant and how it may affect people differently than its cousin.
12/3/2021
2022 midterms
2022 midterms
McConnell Signals GOP Will Run on Pure Obstruction in the Midterms
By Ed Kilgore
They disagree on a lot of things, but Mitch McConnell and Donald Trump both believe in the pursuit of power as an end in itself.
12/3/2021
the money game
the money game
The Future of the Internet May Be Happening in Miami. So Where’s Facebook?
By Kevin T. Dugan
NFT-mad Art Basel in Miami has become a frenzied search for the digital future. Just don’t mention Mark Zuckerberg.
12/3/2021
sports
sports
An NBA Team Lost by 73 Points Last Night
By Benjamin Hart
This one’s gotta sting for the Oklahoma City Thunder.
12/3/2021
roe v. wade
roe v. wade
Amy Coney Barrett’s Adoption Myths
By Irin Carmon
“What’s happening at the Supreme Court is that people are using us to further their own agenda. They’re co-opting our lives and our stories.”
12/3/2021
abortion
abortion
If Roe Is Reversed, Democrats Need to Be Ready
By Ed Kilgore
At a time when their party has convinced itself to avoid social issues, they should prepare for a culture-war battle they can win.
12/3/2021
the city politic
the city politic
Why New York City’s Low Voter Turnout Isn’t the Problem Everybody Says It Is
By Errol Louis
The city’s voting system is far from perfect. But don’t buy the argument that it needs an overhaul to get more people to the polls.
12/2/2021
andrew cuomo
andrew cuomo
The Feds Are Also Investigating Sexual Misconduct Claims Against Andrew Cuomo
By Matt Stieb
The inquiry is reportedly focused on potential violations of federal civil rights and labor laws.
12/2/2021
covid testing
covid testing
Reimbursements for At-Home Tests Are Coming in January
By Matt Stieb
President Biden announced a plan to provide cash back for COVID tests for insured Americans, among other initiatives for the second pandemic winter.
12/2/2021
crime
crime
Everything to Know About Jussie Smollett’s Trial
By Bindu Bansinath and Amanda Arnold
The actor was accused of staging his own hate-crime attack in 2019. Things only got more complicated from there.