In the fall of 2010, conservatives assembled an all-star team of the world’s wrongest people to issue a clarion call warning the Federal Reserve that its attempts to aid the economy risked terrible inflation. “The planned asset purchases risk currency debasement and inflation, and we do not think they will achieve the Fed’s objective of promoting employment,” warned the signatories, who included, among others, Amity Shlaes, Bill Kistol, and Niall Ferguson. (The person who advised the German army not to bother to pack winter clothing for its 1941 invasion of Russia was, sadly, unavailable.)

Shlaes has a piece in National Review defending the letter. Shlaes is an especially interesting figure, a longtime advocate of supply-side economics who had a moment of special prominence with a well-timed 2009 book attacking the New Deal, which became the ballyhooed intellectual foundation for the Republican Party’s decision to reject Keynesian economics and issue unhinged warnings about debt and imminent hyperinflation.

Shlaes concedes that economic developments since 2010 have not proceeded precisely as she and her fellow signatories predicted. (“Well, inflation hasn’t come on a big scale, apparently. Or not yet.”)

Or, actually, not at all: 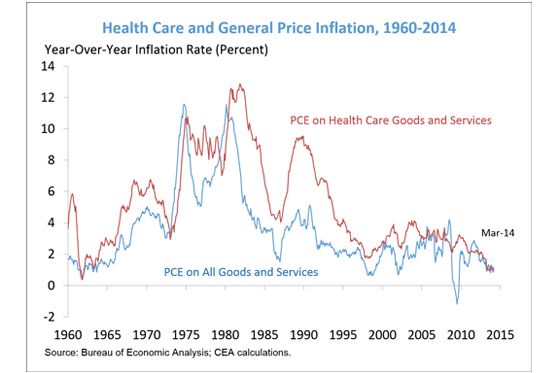 None of the signatories have grappled with the total failure of worldview that this implies. They have all either explained away their failure or refused to acknowledge it. It’s not merely a question of making a failed prediction — sometimes events go unexpectedly. The inflationistas failed to understand the nature of a liquidity trap, and what happens when interest rates hit zero in a severely depressed economy. They didn’t just predict the wrong team would win. They have a failed economic model.

Shlaes’s defense is interesting because, in addition to dodging the larger ideological problem, she seems to fail to come to grips with the whole tradeoff problem. It’s okay that conservatives wrongly warned of rising inflation, she argues, because rising inflation is a theoretical danger and somebody has to warn us about it:

Still, a lot of us remain comfortable with that letter, since we figure someone in the world ought always to warn about the possibility of inflation. Even if what the Fed is doing is not inflationary, the arbitrary fashion in which our central bank responds to markets betrays a lack of concern about inflation. And that behavior by monetary authorities is enough to make markets expect inflation in future.

The inflationistas got the balance of risk totally wrong — unemployment, while falling, has remained above target, while inflation has stayed below it. Shlaes’s defense is not just factually wrong, it’s conceptually bizarre. Somebody has to worry about bear attacks, yes. But if you demand that all children be kept home from school for the year to protect them against bear mauling, it’s not enough to point out that bears exist. You need to somehow engage with the idea of a tradeoff.