Bitcoin enthusiasts love a good conspiracy theory. So this weekend, when the blockchain (Bitcoin’s built-in ledger system) showed that a single Bitcoin collector was trying to sell 30,000 Bitcoin all at once at a price of $300 per coin (or $9 million in total), the cryptocurrency’s fan base started digging for answers.

A sell order that big meant that someone with a lot of Bitcoin was trying to sell down his or her holdings, fast. “Been in bitcoin a long time and this has got to be the most bizarre thing I’ve seen,” one poster wrote. Pretty soon, the anonymous trader had a nickname: “BearWhale,” an homage to JPMorgan Chase’s notorious London Whale.

Nobody knows why BearWhale, whoever he/she/they is/are, is so eager to sell. But this was no casual maneuver. The huge sell order, which was placed through a Bitcoin exchange called Bitstamp, was so large that it distorted the Bitcoin markets, temporarily putting up a “wall” that caused the price of Bitcoin to stall at $300 for several hours while all 30,000 of the seller’s coins were sold off. (All of BearWhale’s $300 sell order has now apparently been filled, and the price of a Bitcoin has moved up, to around $340.) Here’s what the wall looked like, with some additional illustration courtesy of a Reddit user: 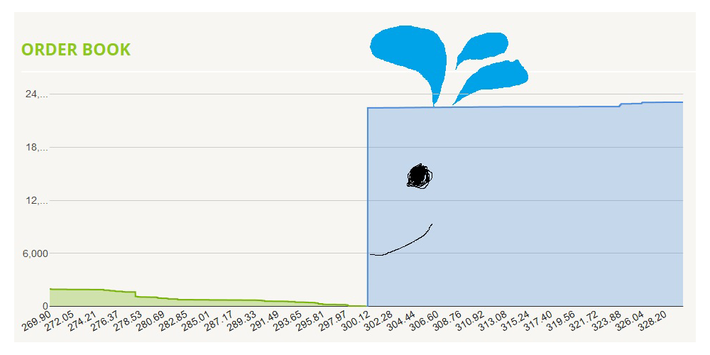 Over at r/bitcoin, the diehards were buzzing with fear and speculation. Many agreed that the BearWhale had simply been a lucky sap who stumbled into Bitcoin riches and decided to get out all at once:

“Seems pretty clear to me. An early adopter decided $300 is their breaking point. They want to cash out their $9m before they miss their chance. They’re not experienced with handling this amount of money because they’ve never been rich before; they just got lucky.”

But some wondered if the BearWhale was at the command of a larger, more nefarious scheme to push the price of Bitcoin down, in order to buy more:

“I think this whale is pro bitcoin. He sells 30k at 300 and puts up a buy wall at 290 after this. Rescuing the market and his other bitcoins

“prob some hedgefund or bank making a big play. this is no bearwhale trying to get out.”

“Everyone should get a bite of this whale. Watch him die, his hopes of being a billionaire dashed forever. Sob. Sob.”

This morning, the BearWhale’s “sell wall” was dismantled — meaning that Bitcoin buyers bought the entire lot of 30,000 Bitcoins and allowed the prices to fluctuate normally. And the Bitcoiners celebrated. “WE JUST HARPOONED THAT MOTHERFUCKER!” wrote one. “While the stock markets were closed, we had our weekend full of laughs and tears. Who doesn’t wanna be part of it? Long live the 24/7 free market!” wrote another.

Even at $340, Bitcoin’s price is still far, far below its all-time high of more than $1,100. The value of a Bitcoin has fallen by more than half in the last three months alone. So perhaps the BearWhale had yet another motive: cheering up busted Bitcoiners by giving them something else to talk about.

+Comments Leave a Comment
‘BearWhale’ Is Freaking Out the Bitcoin Markets

TikTok Tracked User Data Using Tactic Banned by Google
—The Wall Street Journal
1:44 a.m.
vision 2020
vision 2020
Joe Biden Sees the Future in Kamala Harris
By Gabriel Debenedetti
He’s not just planning for the next three months, or even the next four years — but for what comes after.
12:34 a.m.
politics
politics
Ilhan Omar Wins Democratic Primary in Minnesota’s Fifth District
By Matt Stieb
With Omar defeating a progressive challenger with support from pro-Israel groups, all four Squad members are expected to return to Congress in 2021.

8/11/2020
politics
politics
QAnon Booster Marjorie Greene Continues March Toward Congress
By Ed Kilgore
It’s hard to be too extreme in pockets of Red America like Georgia’s 14th district, where Greene just won the Republican primary.
8/11/2020
crime
crime
What We Know About the Killing of Elijah McClain
By Claire Lampen
The 23-year-old died last year after police brutally detained him while he was walking home from a convenience store.
8/11/2020

Joe Biden told top advisers this morning who his VP pick is, per @jeffzeleny.
—@kaitlancollins
8/11/2020

Florida reported 5,831 new coronavirus cases on Tuesday and 276 deaths. The number of deaths is a single-day record during the pandemic.
—@PatriciaMazzei
8/11/2020
coronavirus vaccine
coronavirus vaccine
Russia Says Coronavirus Vaccine Is Ready, Thorough Clinical Trials Be Damned
By Benjamin Hart
If it’s good enough for Putin’s daughter, maybe it’s good enough for you.
8/11/2020
vision 2020
vision 2020
Trump’s 2016 Gettysburg Address Could Be Tough Act to Follow
By Ed Kilgore
A 2020 acceptance speech in Gettysburg would invite comparisons to his 2016 “closing argument,” in which he laid out promises he did not often keep.
8/11/2020
games
games
Don’t Just Blame COVID-19 for College Football’s Lost Season
By Will Leitch
President Trump, the NCAA, and many of the sport’s most loyal fans had their chance to improve the odds. They blew it.
8/11/2020