Ebola: Another reason to close the border?

Ebola: We’re all going to die?

Semi-respectable coverage of the Ebola virus could only last so long on cable news. Today, on both CNN and Fox News, it devolved predictably into self-parody as medical experts explained to the networks’ fear-mongering hosts that they know nothing about anything.

In the cable version of an internet mash-up mp3, CNN’s Ashleigh Banfield smashed together ideas about ISIS and Ebola, asking nonsensically about the virus, “Does that mean that it is that deadly, that dangerous or just that it needs to be treated with the same kind of strategy?” (No.)

Taking the thread even further into fantasy, she offered, “All ISIS would need to do is send a few of its suicide killers into an Ebola affected zone and then get them onto mass transit.” To which an actual doctor replied, “It is not an easily communicable disease … It is not spread by casual contact.” And it’s nothing like ISIS. 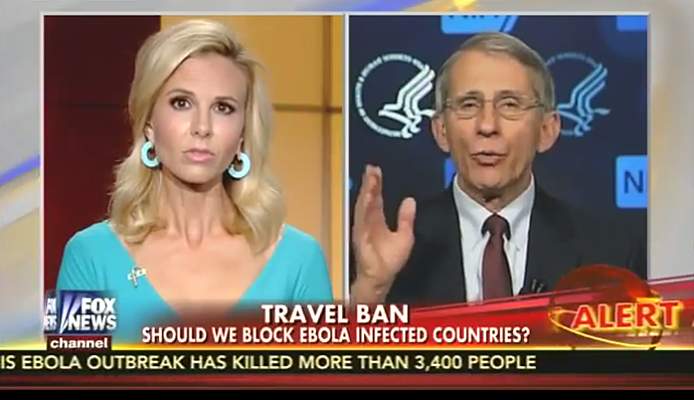 Over on Fox News, everything expert Elisabeth Hasselbeck wondered, “Why are we still letting people into the country who could have possibly been exposed? Why not just shut down the flights and secure the borders?” Instead, she got shut down:

“From a public health standpoint, that really doesn’t make any sense,” said a medical doctor.

“What about a partial ban? A closing of our borders of travel?” she asked again.