The FBI has indicted 23-year-old Nicholas Rotundo, an internal technology resident at Google’s Mountain View Campus, for two counts of cyberstalking after he posed as a researcher in order to solicit naked photos of women, which he then used to blackmail them. Sounds like a totally stand-up dude!

According to the Smoking Gun, Rotundo allegedly convinced a University of Texas Dallas undergrad — who had signed up to participate in scientific studies — that he was a legitimate researcher conducting a study on “breast perception” that “involved the public’s perception of different breast types.” Though it sounds like something a member of the Pen15 club would make up, the victim believed Rotundo, and sent him naked photos of herself in exchange for $8,500, believing the photos would be used for research purposes.

Unfortunately, because Rotundo is a total scumbag, he allegedly sent her the following email from another Gmail address five weeks later: 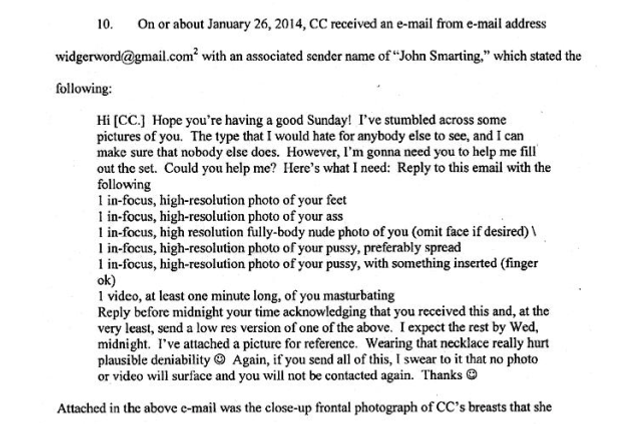 When the victim didn’t respond, he allegedly sent several follow-up emails trying to scare her into sending him more naked photos.

Rotundo was arrested on October 4 for the cyberstalking charges and could face jail time. We’re guessing it’ll be hard for him to work at Google from prison.