The furries were not included in the deal.

Today, Google announced it was leading a massive, $542 million investment round in a Florida-based start-up called Magic Leap, which makes “augmented reality” projects such as an “eyeglasses-like device, different from Google Glass, designed to project computer-generated images over a real-life setting.” It’s a fairly routine investment, as these things go — Facebook already bought VR pioneer Oculus, making Google’s Magic Leap stake more of a catch-up than a trailblazer — but it represents Google’s willingness to invest in fringe technologies that may, someday, move to the mainstream.

It also represents Google’s willingness to gamble on Magic Leap founder and CEO Rony Abovitz, who is an eccentric even by Silicon Valley standards.

A few nuggets from Abovitz’s CV:

• He attended the University of Miami, where he had a cartoon in the student newspaper. Here’s one of his drawings: 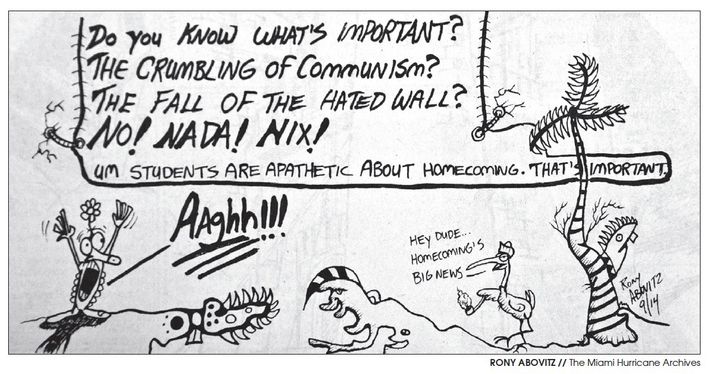 • He plays in an indie-rock band called SparkyDog and Friends.

• His first big company, a medical-device-maker called Mako Surgical, was purchased in 2013 for $1.65 billion.

• In 2005, he accidentally got a CNN executive fired by blogging about his remarks at the World Economic Forum in Davos. The executive, Eason Jordan, apparently implied at an off-the-record panel that the U.S. military had targeted and killed journalists. Abovitz blogged about it, in violation of the conference’s ground rules, and the ensuing firestorm caused Jordan to resign.

• In 2013, Abovitz gave a very bizarre speech at TEDxSarasota during which he wore a space suit while two giant furry creatures danced around a box of fudge.

• Abovitz was once a semi-prolific blogger, writing at length about topics as varied as wheatgrass, Saddam Hussein, and vegetarianism. Futurism figures heavily in his writings, which sound a bit like those of a college philosophy major who hit the bong a little too hard. One fairly typical entry from 2005 titled “The New People” reads:

I think that our society is drifting off into some strange new lands. What will become of us networked, blogging, ipodded, wireless, bluetoothed, myspaced, googled freaks?

Does wikki = democracy in the truest sense? What of Brazil and free culture and remixing and Lessig going on and on about these things?

What of Richard Stallman and all things Linux? What say the Chinese when they unfurl their might on the $99 PC?

Will the New People understand the past, or will it all be a single moment in time, remixed at will, all here, right now, right now?

What is software? If it can wirelessly trasmit from blackberry to ipaq to pc, why can’t our souls float as they will?

When we have control of stem cells and DNA - what will we become?

• Abovitz also blogged quite a bit about Google, in the days before the company was showering him with money. On July 3, 2005, he wrote:

Thanks to Google and blogging, every little bit of insignificant data will be embalmed forever in some server, haunting you. Mobile phone pics of your lunch. Nose hairs. An old pizza. The color of your socks. Text messages between middle school friends. Rants from ex-employees. Nutty conspiracy theories. AI software passing the Turning test, unnoticed.

Even the magic of Google, last year’s Davos stars, is fading. As the U.S. government pushes them to a test of wills and concessions are being made to China (guys - please don’t fully lose your magic - there is little to go around), one of the few companies leading the way for the 21st century is in a true spiritual struggle.

Given Google’s capitulation to Chinese censorship, perhaps they will announce a new Google.hms - basically it will censor all things Israel & infidel. In fact Google can soon offer Google filters that block out the realities of the world. Can you imagine: Google.rwp (Google for racist white people with no hint of other races), Google.rap(Google for the hip hop crew, no chump music), and Google.crpt (Google for US Congressmen - they can use PayPal to get instant bribes for their votes - ez lobbying).

Now, keep in mind that eccentrics sometimes produce great ideas. It’s entirely possible that despite Abovitz’s personal quirks, Magic Leap’s “dynamic digitized light field technology” is brilliant and groundbreaking, and will make billions for Google as it’s used in all manner of tech and entertainment applications. It wouldn’t be the first time that a weirdo has made it big in tech.

It’s also possible that in six months, Google executives will see a dude in a furry costume wandering around the Googleplex and muttering about nose hairs and New People, shake their heads, and wonder if their millions were well-spent after all.