On Monday, the first case of Ebola transmission outside of Africa was recorded in Spain. The unfortunate honor went to a nurse who treated two Spanish priests with the disease after they were evacuated from the hardest-hit countries in west Africa. But despite the virus’s spread, including the only domestic case so far, in Dallas, New York City health officials say the virus doesn’t pose a big threat here.

“New York is a global city; what happens outside our borders can very well happen here,” admits deputy city health commissioner Jay Varma. But isolated cases shouldn’t escalate,” he says. “We feel that we’re very well prepared.” Here’s what the city has done so far.

Medical professionals have been trained to ask the right questions, according to Varma, to avoid another incident like what happened in Texas. (The Dallas Ebola patient was originally sent home with antibiotics.) They’ll ask ER visitors about travel histories and contact with the disease.

The City’s 911 dispatchers also got new guidelines on Monday, instructing them to ask anyone calling in with a fever or vomiting about potential contact with infected people, so that first responders know to use extra precautions.

Hospital staff will isolate any potential cases in private rooms with private bathrooms — a simple way to contain the disease that’s a luxury elsewhere, but readily available in the U.S.

Bellevue Hospital has set up “special medical rooms” for patients vomiting or bleeding in later stages of the disease, Varma says. (Intelligencer has reached out to the NYC Health and Hospitals Corporation for more details, but hasn’t heard back.) Though Bellevue is specially designated for this, Varma says other hospitals have also told him they feel comfortable handling such cases.

The city has also been sending actors into public hospitals to test these response skills in action. They enter emergency rooms presenting with mild symptoms and see whether ER staff asks them the typical questions (travel history, contact with affected people, and the like).

The Department of Health has compiled a handy flowchart to help identify the proper measures to be taken in each case: 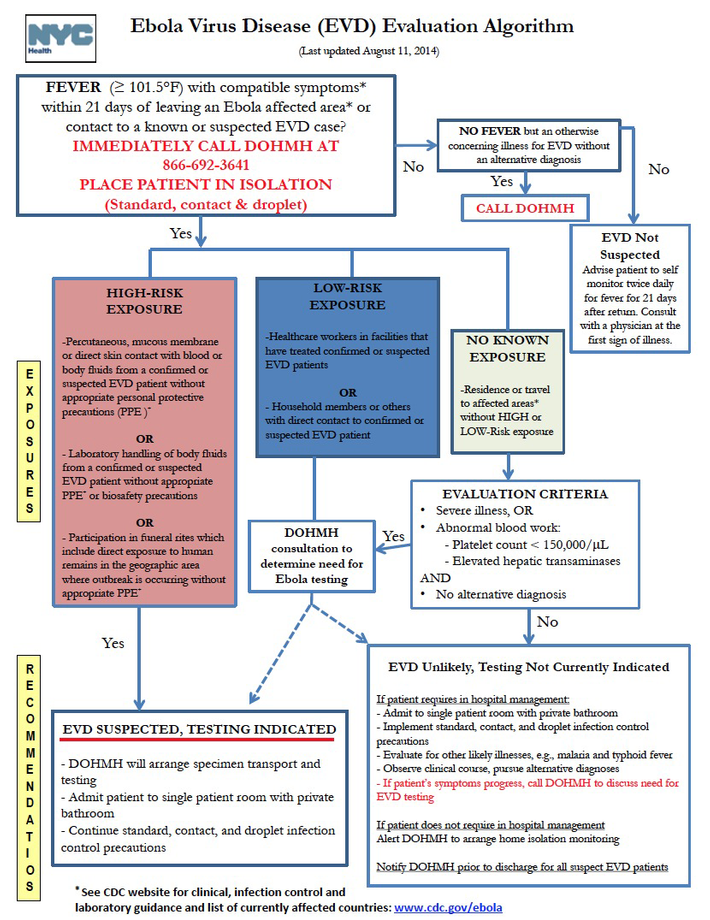 Same-day results will be available for Ebola tests — suspected cases will be tested at DOHMH labs, and doctors and patients will have an answer within eight hours.