For those inclined to distrust the CDC’s promise that the Ebola virus can be contained now that it’s reached U.S. shores, get your credit cards ready. “It’s a big mistake to downplay and act as if ‘oh, this is not a big deal, we can control all this,’” claimed doctor and man of the people Rand Paul. “It’s an incredibly transmissible disease that everyone is downplaying, saying it’s hard to catch.” But a hazmat suit might help, and boy, are there some blogs for you.

Almost immediately after the first domestic case was confirmed in Texas, Amazon saw a rush on gear normally reserved for scientists in alien movies: “as of Wednesday sales of a type of full-body protective suits were up 131,000 percent and sales for one type of mask had risen 18,000 percent in 24 hours,” CNBC reports. 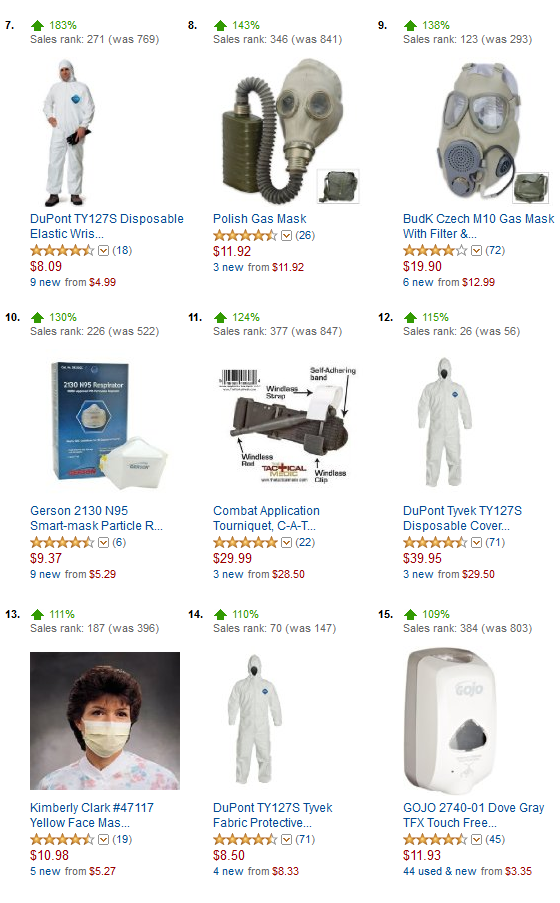 Two days later, the market is still hot. Although the online retailer does not release exact sales figures, the “industrial and scientific” section of the “movers and shakers” page, which shows products flying off the virtual shelves in the last day, is filled with gas masks, body suits, and, for some reason, a “Combat Application Tourniquet” (zombie invasion?). As seen above, a huge chunk of the top 20 sellers would have practical uses if more than one person in the country had Ebola.

But in the survivalist community, also known as preppers — the people who think the world could any minute, for reasons ranging from Obama being a reptilian Illuminati puppet to Obama releasing an airborne version of the virus — anyone just shopping now is a total noob.

“I think that a lot of people who are involved in the preparedness community already have the supplies to handle a wide variety of crises,” said the woman behind the Organic Prepper blog. “Many of us do keep pandemic supplies on hand: things like nitrile gloves, N95 and N100 masks and sanitation supplies. Others who have been aware of the need but who have not yet made the purchases will very likely be on Amazon, ordering the necessary supplies, just in case this does turn into a pandemic.”

For a peek into that world, try the Preppers World USA Facebook page, which boasts more than 106,000 subscribers. The mood is calmly conspiratorial, with a dash of racism, on a post about Ebola “jumping the fence,” like the White House intruder: 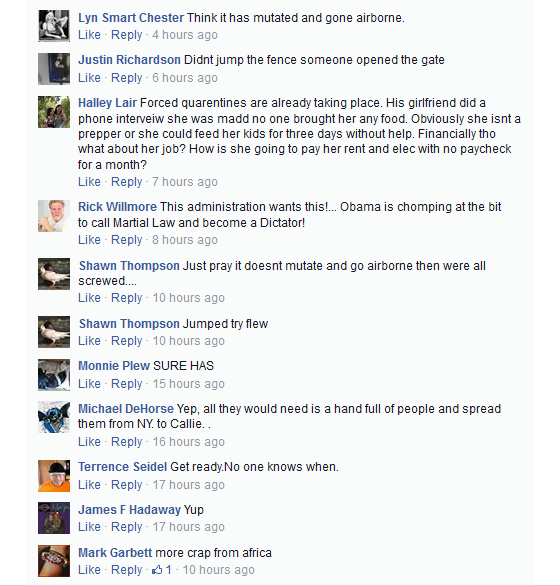 Over at the All About Preppers Pinterest page, anyone worried about forgetting a necessary supply can start making a checklist: 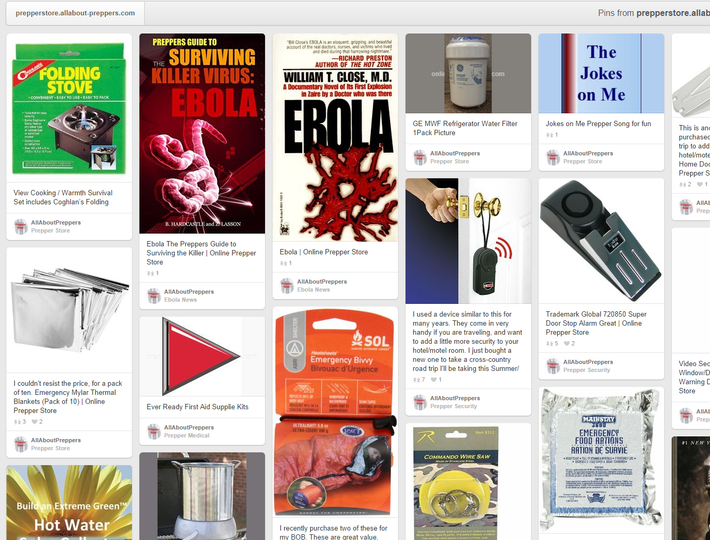 This guy, however, was ready way back in April, creating a 20-minute video imagining a SHTF (“shit hits the fan”) Ebola Outbreak Scenario. In addition to the obvious (“Catapult, Ammo, Axe, Bushcraft Knives & Pruning Saw”), he recommends having a whiskey flask on hand:

For the more DIY prepper, there’s the Backdoor Survival guide to Ebola, which has a more whimsical touch, stressing the need for books, playing cards, and board games, but also “essential oils.”

I keep a spray bottle with Shield protective blend and witch hazel with me at all times for use as a hand and gizmo sanitizer.  I spray it everywhere, including on my phone, my keyboard, on pillows and bedding, and more.  If I feel a sniffle or a runny nose coming on, standalone Shield goes in the diffuser 24/7.

But what about protection from Ebola or other deadly viruses?  The jury is out but as far as I am concerned, staying healthy with a strong immune system can not hurt.

The jury is out, but here’s the recipe just in case:

Here is the recipe I use to make “Shield Protective Spray”.  This spray makes a terrific hand sanitizer, room freshener, and all around disinfectant and protectant.  This is so darn simple, it is embarrassing.

That’s it.  Were you expecting something more difficult?

Well, were you? Okay, fine, here’s another:

One more note.  Shield Blend is actually an ancient blend based upon a legend that has its roots in 15th century England during the time of the great plague. Grave-robber thieves developed their own blend of Clove, Cinnamon Bark, Lemon, Eucalyptus, and Rosemary to protect them while robbing the plague victims.

Too elaborate? For the prepper concerned with convenience, there’s always the Doom and Bloom’s Deluxe Ebola Pandemic Kit for just $49.99 (plus shipping). Ten alcohol wipes and one two-ounce hand sanitizer are included. 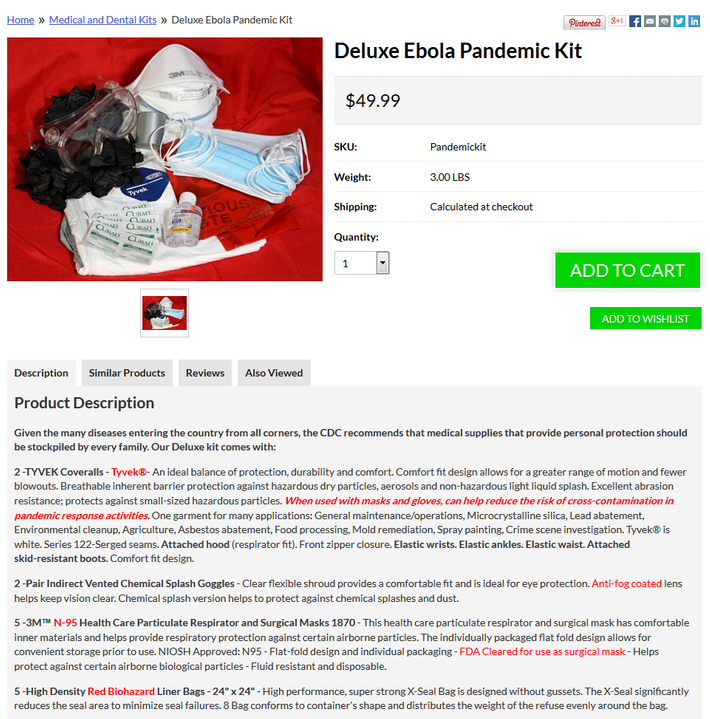 But there is a catch when it comes to ordering survival supplies online. “Those who are most fearful at the moment will be locking themselves into their homes — maybe first going out and topping off their supplies at their local stores, as opposed to ordering products that will be coming through the mail,” one survivalist store owner told CNBC, “because to take delivery of something means they have to answer the door.”

+Comments Leave a Comment
How Preppers Are Stocking Up for Ebola