If you’ve ever wondered where the endless font of gun-nut paranoia comes from, try the National Rifle Association’s magazine, America’s 1st Freedom. In a special election issue headlined “Chaos at Our Door? A Dangerous World Is Closing In” and illustrated with an Islamic State fighter, NRA chief fearmongerer Wayne LaPierre writes a column warning Americans to “Vote Your Guns in November.” Because the end is nigh. 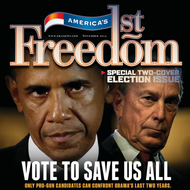 “Even if you take terrorists and criminals out of the picture, chaos is an ever-present danger to Americans today — especially when you factor in the undercurrent of social unrest that seethes beneath the surface of much of our society,” LaPierre warns, echoing his earlier work for the Daily Caller. “Whether it’s through an EMP, a massive cyber attack, another 9/11 or just isolated sprees of murder and mayhem, military and homeland security officials agree it’s just a matter of time before the U.S. faces some kind of terrorist attack.”

An EMP is an electromagnetic pulse attack, which LaPierre is thorough enough to explain:

This isn’t some feverish, paranoid fantasy. It’s not some fabrication from “Doomsday Preppers.” […] In many ways, our nation would be plunged back into the 1800s. Without clean water or sanitation, Third World diseases would re-emerge—amoebic dysentery, typhoid, cholera—killing our youngest and frailest family members. Hospitals would be overwhelmed.

Remember the horrific scenes you saw from Hurricane Katrina or the 2010 Haiti earthquake. Then magnify those calamities to a national scale and lengthen them from weeks to many months.

… within a year of a national blackout, as much as 90 percent of the population of the U.S. could die due to starvation, disease and the collapse of civilization as we know it. Now, that might be too terrifying to even comprehend. But an EMP attack is far from the only way of wreaking havoc on America’s infrastructure or blacking out our power grid.

There’s also the foreign threat, from every (brown) country:

So ask yourself: Could suicidal terrorist mass murderers try to bomb an American hotel, an American train station, shopping mall or movie theater? Make no mistake: The world that surrounds us is growing more dangerous all the time. Whether it’s enemy state actors, foreign terrorists, Mexican drug cartels or domestic criminals, the threats Americans face are massive—and growing.

Not to mention the people of color already in the U.S.:

When states can’t or won’t spend the money needed to imprison their criminals, and those prisons become overcrowded, the courts say to set them free. So now the floodgates are open as our nation’s prisons are purged. […]

On top of that flood, add the waves of drug smugglers, kidnappers, sex-slave traffickers and criminals of all kinds who invade our country from the south every day.

Guns, of course, can stop it all, but only if enough good guys have them. “Only pro-gun candidates can confront Obama’s last two years,” warns the magazine’s alternate cover starring the president and Michael Bloomberg. “On Election Day, Tuesday, Nov. 4, we will defend our right to defend ourselves because we have no other choice. We will vote our guns! We will vote our freedom! And we will prevail!” That might be the scariest idea of all.