This is no easy feat. Business guides written by successful businessmen — Thiel is the billionaire co-founder of PayPal and Palantir Technologies — are usually awful. Anecdotes about past successes are often a poor guide to how to succeed in the future: randomness, luck, and serendipity end up horribly underweighted; specific, practical advice becomes generalized pabulum.

But Zero to One has much to recommend it to the enterprising young entrepreneur or established investor.

Thiel’s central insight is that start-ups should not seek to become a competitive business. They should seek to become a monopoly, by which he means “the kind of company that’s so good at what it does that no other firm can offer a close substitute.” Such firms often go from “zero to one,” as per the title. They offer truly new and thus unique goods or services, rather than battling it out in the crowded market from 1 to n.

In that 1 to n space, companies get bogged down in an endless fight against thinning margins. Think of restaurants or retailers or car salesmen. They sell substitutable goods, and as such compete viciously to reach and offer better value to the consumer, leaving little time and money for innovation.

Cornering a market is the key to success, Thiel argues, offering up Google as one example. Its dominance of the search market provides it with a steady flood of online advertising dollars, freeing it to spend money on self-driving cars, balloon-powered internet, and the like. “Monopolists can afford to think about things other than making money,” Thiel argues. “Non-monopolists can’t.”

Creating something new and thus unique is no easy feat, Thiel admits. It requires entrepreneurs to ask, “What valuable company is nobody building?” If the answer were obvious, the question would be moot. But he advises would-be entrepreneurs to think small — “every monopoly dominates a large share of its market,” thus “every startup should start with a very small market” — and to think different.

And think differently Thiel does, delivering such dry business insight by way of a delightfully weird three-ring circus of a text. He references Lady Gaga, the Bible, the Aztecs, Lord of the Rings, and John Rawls. He pits Freud against Shakespeare, and Shakespeare wins. He describes consultants as nihilists. He snarks about Richard Branson’s hair. He notes that he prefers Star Wars to Star Trek because the former is capitalist and the latter communist. There’s a long, surprising reflection on secrets. There is a stellar drawing of Fat Elvis.

In perhaps my favorite bizarre moment, he argues that both the Unabomber and hipsters share certain nostalgic longings, and illustrates the point with this side-by-side: 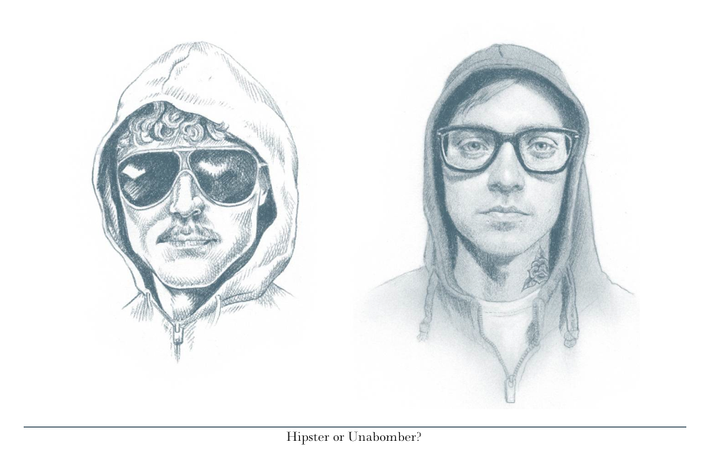 So there we have it: a book that delivers solid, insightful business advice in an engaging, fun manner. What’s not to like?

Well, I doubt that Thiel would be satisfied with that review. His book has much broader ambitions than to simply guide along the next generation of Silicon Valley entrepreneurs. He is not worried about aiding new businesses as much as he is worried about building a better future — one complete with fantastic new technologies and a renewed sense of national purpose. He wants to hasten the singularity. He wants us to live forever.

To get there, he thinks, individuals and companies need to leave the 1 to n space and occupy the zero to one space. He implores us to seek out a fresh future through dedicated, optimistic innovation. For him, the stakes are moral and even existential. “Without new technology to relieve competitive pressures, stagnation is likely to erupt into conflict,” he warns. “In case of conflict on a global scale, stagnation collapses into extinction.”

But Thiel offers an imperative more so than a plan. He castigates the institutions of higher education whose legion graduates shuffle off into decidedly 1-to-n consultancies and investment banks. “For the privilege of being turned into conformists, students (or their families) pay hundreds of thousands of dollars in skyrocketing tuition that continues to outpace inflation,” he writes. “Why are we doing this to ourselves?” But he offers no recommendations for fixing college financing, curricula, or career counseling. He tells entrepreneurs to be more innovative, but concedes, “because every innovation is new and unique, no authority can prescribe in concrete terms how to be innovative.”

Go forth and innovate, please, in other words. Just don’t ask Thiel how.