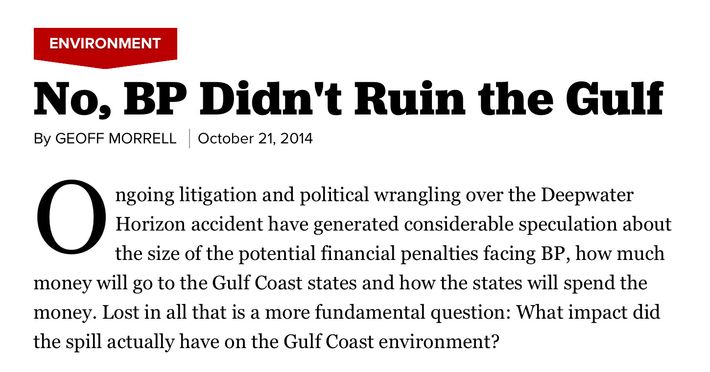 While not identified as sponsored content, the defense of the 2010 Deepwater Horizon disaster does end on an interesting note:

When Morrell, a former journalist and Pentagon press secretary, joined the BP PR war in 2011, the announcement was reported by Politico’s chief White House correspondent and franchise player Mike Allen, complete with glowing quotes like, “Geoff is top notch and will serve them well.” Indeed.

BP also happens to be a frequent advertiser in Allen’s daily email newsletter “Playbook,” one of Politico’s marquee products. A weeklong ad-buy in “Playbook” goes for about $35,000, and as the Washington Post’s Erik Wemple reported last year, that buys you more than ads — it buys you loyalty:

Last June, for instance, Allen found newsworthy an AP story about a BP campaign to challenge settlement claims stemming from the 2010 Deepwater Horizon oil spill. The item quoted from a full-page ad that the company had placed in newspapers, and that the AP story had cited. It also included a link to the ad.

Companies love it when their ads get passed around.

Additionally, as Wemple noted, Mark Leibovich’s book This Town, which chronicles the incestuous logrolling of D.C., reports that Morrell and Allen are close friends.

Of course, Politico Magazine and “Playbook” are not directly connected, except for the fact that they are published by the same company. Politico declined to comment on the record about Morrell’s latest appearance in its pages.