Everybody agrees that Republicans will win the midterm elections and stand a better-than-ever chance of controlling the Senate. For months, a debate has raged over why. One analysis is structural. Democrats rely heavily on minorities and the young, who tend to skip midterm elections, making the electorate more Republican than the one that shows up at the polls every four years. Additionally, the Senate races this year force Democrats to defend far more seats, many of which are held in Republican territory.

The competing analysis is that the election represents a “wave.” Wave-theory advocates don’t deny that structural forces favor the GOP, but they tend to emphasize a backlash by the voters against President Obama and his policies. This way of thinking has particular appeal to conservatives, like Michael Barone (“That should settle the ongoing argument in psephological circles about whether this is a “wave” year”), Jennifer Rubin (“The intensely anti-Obama wave will lift many, but not all, Republican boats”), and Josh Kraushaar. Wave advocates see the midterms as America’s righteous punishment against liberal overreach.

It is certainly true that Obama has poor approval ratings. (One does not need an election to measure indirectly what polling can show directly.) But this, in turn, returns us to the original question of locating the source of the voters’ displeasure. Are Americans unhappy with Obama’s policies, per se, or are they acting out a broader displeasure with the state of the economy, or American politics? To what extent should we think of the electorate as expressing conservative (or, at least, anti-liberal) impulses?

One way to test the two theories against each other is to consider governor’s races. The smaller, non-presidential electorate still favors Republicans, but the map does not. Senate seats turn over every six years, and six years ago a Democratic wave election helped the party capture lots of normally red territory, making this election especially challenging. Governorships, on the other hand, turn over every four years. And four years ago, Republicans carried off a rout. So in the governor’s races, it is Republicans now fighting in neutral or hostile territory.

And as Sam Wang shows, governor’s races in many states have lurched decisively toward Democrats: 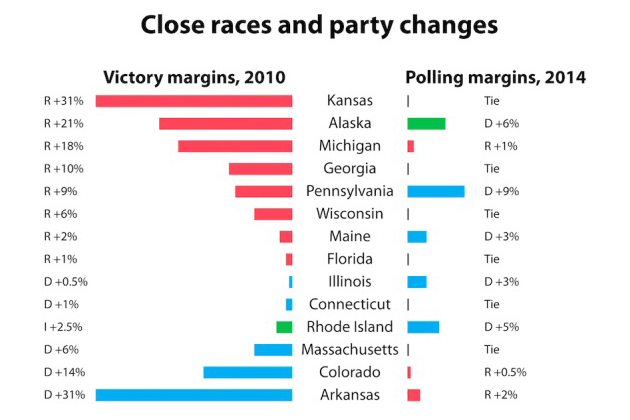 The huge turnabout in Arkansas represents the term-limited retirement of highly popular Democrat Mike Beebe. The blue lines at the top are a measure of the backlash against Republican governors, many of whom enacted policy agendas reflecting the national-level Republican vision and find themselves in danger of losing reelection.

Kansas, of course, offers the quintessential case of a state-level backlash. Governor Sam Brownback explicitly fashioned his state as a laboratory for the conservative program, especially on taxes, and the results have been catastrophic. (Josh Barro reports today that the state’s revenue loss, which Brownback explained away as temporary, runs even deeper than expected.) Wisconsin’s Scott Walker, Michigan’s Rick Snyder, and Florida governor Rick Scott, all circa-2010 Republican governors in purple states, all face dire threats of losing their seats after a single term. North Carolina GOP governor Pat McCrory, not facing reelection until 2016, has so poisoned the state’s voters against his party that Democratic Senator Kay Hagan leads nearly every poll.

North Carolina and Kansas are the two states where Democrats seem to be dramatically over-performing the fundamentals. (They have a chance to pull a surprise win in Georgia, but that would be attributable to the state’s rapid growth of Democratic voters.) North Carolina and Kansas have in common Republican governors who have enacted sweeping, controversial agendas that have turned their party’s Senate candidates into quasi-incumbents.

Conservatives have strained to argue that Obama’s agenda, and especially his hated health-care law, explain his party’s struggle. “Throughout this election cycle,” writes Kraushaar, “the Democrats have been dogged by the president’s health care law.” Karl Rove gloats, “the president’s health law may end up as a decisive cause of two epic midterm defeats for the Democratic Party.”

That certainly describes the kind of campaign Republicans have wanted to run, but not the one they actually have. Red-state Republicans Mitch McConnell and Tom Cotton have dissembled incoherently rather than endorse the anti-Obamacare absolutism favored by the conservative base. Scott declared himself in favor of accepting the law’s Medicaid expansion last year. This summer, doomed Pennsylvania Republican governor Tom Corbett finally gave in. North Carolina’s Thom Tillis, who once boasted — accurately — of having “stopped Obamacare’s Medicaid expansion cold,” announced this week that the state should “consider” accepting it.

In McConnell’s case, the Republican is bedeviled by a popular Democratic governor who has thrown himself fully behind implementing Obamacare, with impressive results. In many of the other states, the general pro-Republican thrust of the election is running up against a localized backlash against Republican policies. If Obama were the only incumbent, Republicans would have locked up the Senate majority by now and might be poised to enjoy a genuine wave. Unfortunately for them, they have had the chance to govern.

10:57 a.m.
early and often
early and often
The Latest Hunter Biden Revelation Is a New Low
By Matt Stieb
Texts reportedly show he withheld an employee’s pay for sex.
10:32 a.m.
the talented mr. santos
the talented mr. santos
Here’s Every Single Lie Told by George Santos
By Matt Stieb
Navigating the many exaggerations and falsehoods of New York’s newest representative.
10:02 a.m.
creature capers
creature capers
The Hunt Is on to Find the Dallas Zoo Bandit
By Matt Stieb
Police are looking for whoever is responsible in a strange crime wave in which animals have been killed and apparently stolen from the zoo.
9:10 a.m.
what we know
what we know
New FBI Search of Biden’s Home Finds No Classified Documents
By Margaret Hartmann
The search of Biden’s Rehoboth, Delaware beach house was planned and consensual, like the searches of his office and Wilmington residence.
8:00 a.m.
early and often
early and often
The GOP Can’t Remember Why It Took the Debt Ceiling Hostage
By Eric Levitz
Republicans are fighting Biden for the sake of fighting.
2/1/2023
politics
politics
Eric Adams’s Approval Rating Is Falling
By Nia Prater
Crime is the top issue for New Yorkers, and very few say it’s gotten better under his watch.
2/1/2023
early and often
early and often
Nikki Haley Is Taking on Trump 2024 (or Running for VP)
By Ed Kilgore
The South Carolinian is expected to announce her run later this month, but Trump has already staked a claim on her crucial home state.
2/1/2023
tremendous content
tremendous content
Watch Trump Repeatedly Plead the Fifth, Like a Mobster
By Margaret Hartmann
New deposition video shows Trump, who once said only criminals and “the mob” take the Fifth, asserting his constitutional right more than 400 times.
2/1/2023
politics
politics
There’s Another Push to Change New York’s Bail Reforms
By Nia Prater
Governor Kathy Hochul reaffirmed her intent to give judges more discretion in setting bail during her budget presentation Wednesday.
2/1/2023
let it snow
let it snow
Our Long Local Snowmare Is Over
By Benjamin Hart
New York City finally saw some flakes stick to the ground on Wednesday morning. Better late than never.
2/1/2023
the big picture
the big picture
The End of ‘Zombie Neoliberalism’?
By Eric Levitz
There is burgeoning, bipartisan support for big government.
2/1/2023
the national interest
the national interest
It’s Republicans Who Won’t Negotiate Over the Budget Deficit
By Jonathan Chait
The other big lie in this hostage crisis is hiding in plain sight.
2/1/2023
the system
the system
The Government’s Telling Response to Tyre Nichols’s Death
By Zak Cheney-Rice
The reforms being considered would probably not have prevented his killing. But officials have gotten better at preempting outrage.
1/31/2023
life after roe
life after roe
RNC Tells Republican Politicians to Stay Extreme on Abortion
By Ed Kilgore
The RNC passed a resolution scolding politicians who backed off after the end of Roe v. Wade and urging them to stay on the offensive in 2024.
1/31/2023
tyre nichols
tyre nichols
Eric Adams Defends Specialized Police Units Following Tyre Nichols Case
By Nia Prater
The New York mayor said that, while he did not want to second-guess the decision to disband Memphis’s SCORPION unit, “units don’t create abuse.”
1/31/2023
the money game
the money game
Jerome Powell’s Crazy Balancing Act
By Kyla Scanlon
The Fed chairman faces a big decision with the world watching. No one said his job would be easy.
1/31/2023
the national interest
the national interest
Why DeSantis Is on Track to Beat Trump
By Jonathan Chait
The main Trump alternative has learned the lessons of 2016.
1/31/2023
what we know
what we know
A Seventh Officer Has Been Suspended After Tyre Nichols’s Death: Updates
By Intelligencer Staff
The officer was relieved of duty the same day the five officers charged with murder were fired for the beating.
1/31/2023
games
games
The Lost Joy of Hating Sports Announcers
By Will Leitch
Self-righteous jerks like Billy Packer don’t exist on TV anymore, and that’s a shame.
1/31/2023
lost in translation
lost in translation
The Spy Who Wasn’t
By Paula Aceves
Baimadajie Angwang wanted a visa for his daughter. He got charged with being an “insider threat” instead.
1/30/2023
royals
royals
King Charles Is Ready to Trash Harry — or Declare a Truce
By Margaret Hartmann
Or Prince Harry is right about the U.K. press relentlessly peddling utter nonsense.
1/30/2023
politics
politics
Manhattan DA Moves Closer to Charging Trump Over Stormy Daniels Hush Money
By Nia Prater
Prosecutors have begun to present evidence to a Manhattan grand jury from their inquiry into hush payments made to Stormy Daniels on behalf of Trump.