New York’s subway system is one of the best underground public-transportation systems in the world. It’s also one of the grossest. People regularly urinate, defecate, and perform other despicable acts on our city’s trains. And don’t even get us started about this morning’s used condom. Help us pick New York’s most disgusting subway rider. You can vote below.

In January 2011, the Smoking Gun published this video of an old guy demonstrating his impressive snot skills and then wiping said skills on the train door.

He loves his pet rat. Like, a lot. And he shows his love by letting the rat squirm around in his mouth.

Few things communicate “IDGAF” better than kicking off your shoes, spreading out on a crowded train, and guzzling a beer. 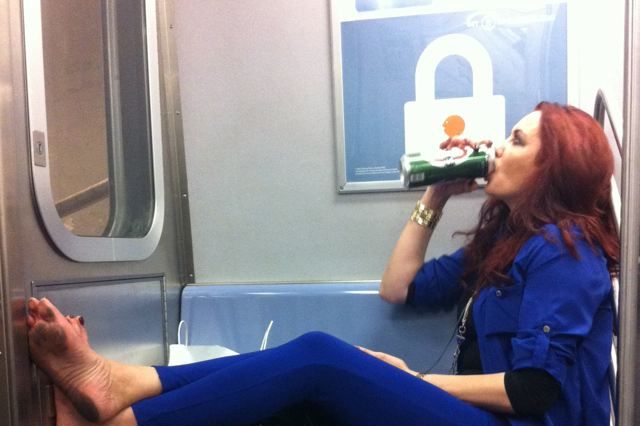 If you’ve got it, flaunt it — just maybe not on the train where people have to put their hands?

He just wants to read his newspaper and eat a giant wheel of Brie in peace.

We don’t know who he is. We just know he’s disgusting.

THE FEED
29 mins ago
the national interest
the national interest
Republicans Are Trying to Cover Up Greatest Political Scandal in U.S. History
By Jonathan Chait
The GOP still won’t admit it even deserves to be investigated.
4:47 p.m.
early and often
early and often
The Most Explosive Revelations From Cassidy Hutchinson’s Testimony
By Margaret Hartmann
The ex–Mark Meadows aide testified that Trump lunged at a Secret Service agent on January 6 and said of the armed mob, “They’re not here to hurt me.”
4:31 p.m.
politics
politics
Rudy Goes on Media Blitz After Slap on Back
By Benjamin Hart and Nia Prater
On Tuesday, Mayor Adams criticized Giuliani’s comments. Rudy responded “Tell Adams to go f- - - himself. What a f- - -ing scumbag.”